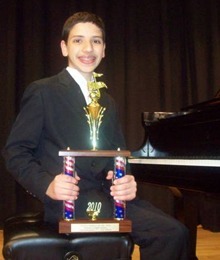 Anthony Coniglio, a 13-year-old student at St. Mark School in Southwest Ranches, continues to win piano competitions and credits FrÃ©dÃ©ric Chopin and his diabetic diagnosis as two of the keys to his rapid success.

DAVIE â Anthony Coniglio, a 13-year-old student at St. Mark School in Southwest Ranches, continues to win piano competitions and credits FrÃ©dÃ©ric Chopin and his diabetic diagnosis as two of the keys to his rapid success.

âI am honored to have played Chopinâs Waltz in A-flat Major, Op. 69, No. 1 for the Pompano Beach Piano Competition, just two days before Chopinâs 200th birthday celebration,â said Anthony. âThree of my pieces for the MTNA competition were also by Chopin. Ever since I attended my first concert hosted by The Chopin Foundation, I was so inspired to play and learn more about classical music and Chopinâs romantic style.â

At age 9, Coniglio was diagnosed with Type 1 diabetes, and five months later, he turned to playing the piano, which has helped him work through the dramatic changes that he had to make learning to live with this condition.

âI really donât believe that I would have started to play the piano, or put as much time and energy into my playing, if it wasnât for my initial anger and frustration from having Type 1 diabetes,â he said. âPlaying the piano gave me an outlet to express my feelings. Chopinâs music was very therapeutic for me.â

When it became clear that Anthony was capable of playing the piano very well, his parents enrolled him in Lynn Universityâs Conservatory of Musicâs Preparatory School of Music.

âI am not into sports, so music became my passion,â Anthony said.

âAfter I was diagnosed, I used to always think about myself being a diabetic, and it would consume me; but now I think of myself more as a pianist,â Anthony said. âI canât believe how much I have grown and changed since I started at Lynn last fall. Chopinâs music and playing the piano did something to me I canât describe. It was life changing and helped heal me emotionally. I consider it all a miracle.â