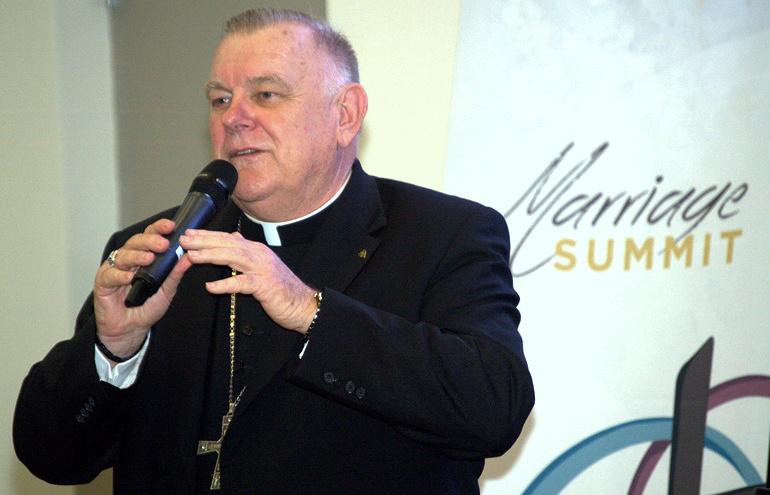 Marriage is a vocation like the priesthood, Archbishop Wenski said at the Marriage Summit at St. Brendan High School in Miami.

MIAMI | "In case you haven't heard, marriage is difficult."

Archbishop Thomas Wenski's quip drew laughs. His 400 listeners had heard. That's what brought them to the Marriage Summit at St. Brendan High School.

The March 25 summit, sponsored by the archdiocese and run by Annunciation Ministries, was an eight-hour blend of toolbox, pep rally and theology backgrounder. The attendees sampled two rounds of workshops on marriage support programs offered by the archdiocese. They also heard two keynote talks and a homily during Mass at neighboring St. John Vianney College Seminary -- all encouraging them to help spread the Catholic ideal of marriage. 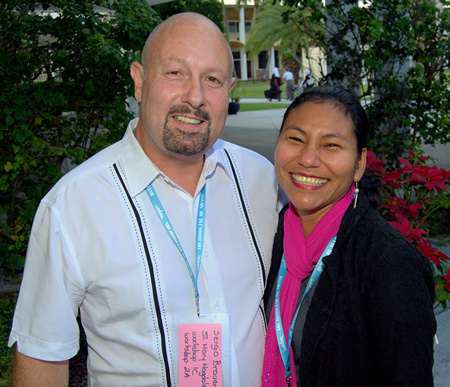 "Many problems we have are because we've kicked out God from society," said Sergio Brauer, attending the Marriage Summit with his wife, Maria.

All of the events were a response to the archdiocesan synodical process started by Archbishop Wenski. One of the most-requested changes was to boost support for marriages and families.

"The common reality is that marriage is under stress," he said in an interview. "We want to strengthen marriage, before and after the wedding."

Many of the listeners didn’t need convincing.

"This is of extreme importance," said Sergio Brauer of St. Mary Magdalen Church, Sunny Isles. "Many problems we have are because we've kicked out God from society, and from our lives, and from our families. If we put him back, many of the evils would be solved."

His wife, Maria, added that young people need to give up their fear of relationships. "We want to help people not to be afraid of marriage, of making a commitment to God and each other. We want to tell young people that marriage is worth it."

But the Marriage Summit was no mere conference, and the participants weren't just conference-goers. They were delegates, chosen by their priests as either involved or interested in marriage ministries. Together, they represented 87 percent of the 109 parishes and missions in the Archdiocese of Miami. 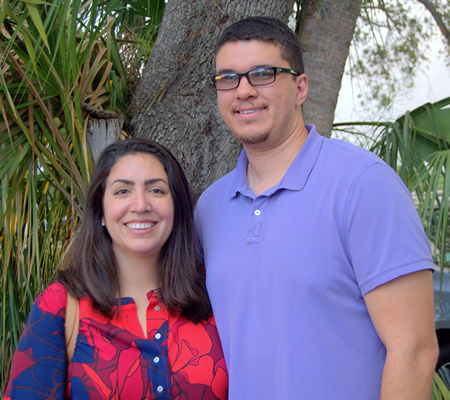 James and Elizabeth Richards looked forward to using the tools they learned during the Marriage Summit at St. Brendan High School in Miami.

"It was more to align people with Archbishop Wenski's vision of marriage ministries," said Stephen Colella, archdiocesan cabinet secretary of parish life, who gave one of two keynote speeches along with his wife, Kari.

"There are good people trying to do good things in most of the parishes," he said. "We want to tie them together like nets, to catch people and strengthen them in their marriages."

The workshops dealt with a range of matters. They included preparation for marriage, mentoring engaged couples, marriage enrichment, natural family planning, and how to run a couples support group in one's parish.

James Richards said he liked the array of what he called "tools to enrich our own marriage. And to pass along with other couples in our parish."

His wife, Elizabeth, said the Marriage Summit came at a good time for their parish, Blessed Sacrament in Oakland Park. "Right now at our church, we're seeing a lot of younger families, and a lot of weddings. Father Bob (Tywoniak) wants some support system for them."

Some people especially enjoyed a session called "Know Oneself," which classified personalities in the ancient categories of sanguine, choleric, phlegmatic and melancholic. 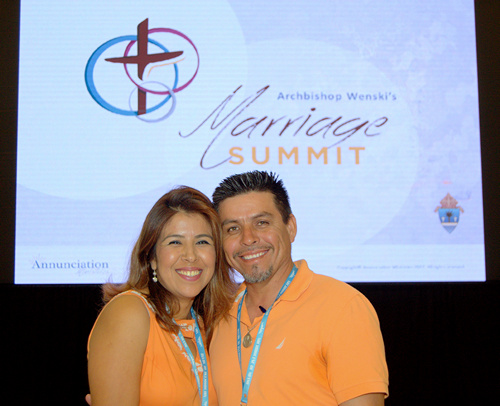 Leonico and Maria Teresa Ulloa enjoyed a talk on personality types at the Marriage Summit at St. Brendan High School in Miami.

"If you don't know yourself, you can't help others," said Leonico Ulloa of St. Henry parish, Pompano Beach, at the summit with wife Maria Teresa. "They should do this once or twice a year."

Harold and Nelida Wessigk of St. Martin de Porres parish, Leisure City, sat in on "Two to Tango," a rundown on communication skills for couples. One tip Harold shared: "Don’t talk about problems when you're hungry or grouchy."

Nelida also applauded a recommendation to seek help when a marriage runs into trouble. "We have to be humble and realize that some people know more about [marriage] than we do. There are a lot of people that can help."

Jane admired how the system provides for mentoring after a wedding. "I hope the summit will lead to more programs that are parish based. So couples can come to church and have friends there."

In their keynote, Kari and Stephen Colella drew parallels between "natural" and "sacramental" marriage. Both have the central elements of unity, fertility and indissolubility. 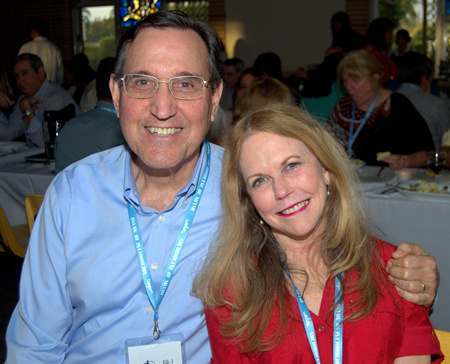 Jane and Joe Mastrucci praised "Fully Engaged," the archdiocese's new premarital program, which they learned about at the Marriage Summit at St. Brendan High School in Miami.

But "when the couple are Christians, it takes on a supernatural dimension -- Christ dwells with the couple," continued Kari, executive director of Annunciation Ministries. "Then it becomes a means of grace, as other sacraments do. And it becomes a sign of his love for the world."

Her favorite metaphor was chocolate milk. "You pour the syrup into milk, and it hits the bottom. Then you stir it up, receive grace and work with it. And you share the love of God with others through your marriage."

That kind of marriage is needed more than ever -- it even amounts to a vocation or calling, Archbishop Wenski said in his own keynote address. For the first time in American history, he said, unwedded adults -- either divorced or never married -- outnumber married ones.

"Too many people, especially among our young, are cynical about the possibilities of entering into a joyful and permanent marriage," he said. "The key to regaining such a balance is found in a personal relationship with God and an understanding of the sacrificial love of Jesus Christ.

"And this is what makes the Sacrament of Matrimony different from cohabitation or even a civil marriage. As a sacrament, matrimony is a living and outward sign of Christ’s own love for his bride, the Church."

At several points, though, Marriage Summit leaders reminded everyone of the main goal: to try "just one thing" back in their home churches.

Maria Diaz was totally on board with that.

"I hope everyone goes back to their parishes and starts [marriage support] programs," said Diaz, a member of St. Patrick Church, Miami Beach. "Even if they follow up only on one thing, they’ll light a fire." 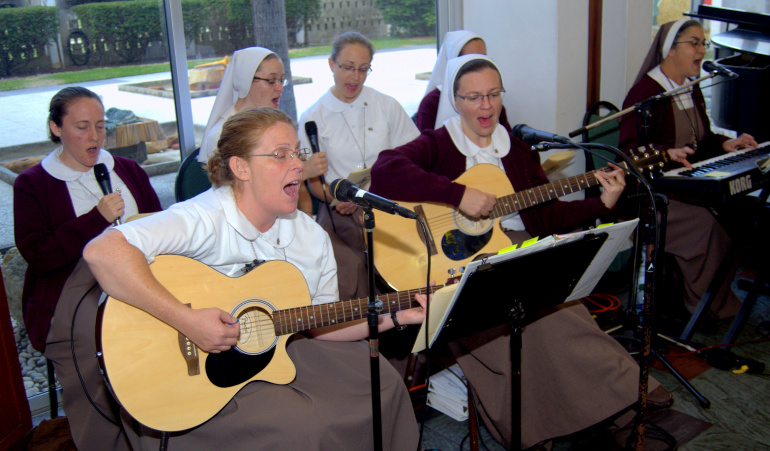 Members of the Servants of the Pierced Hearts of Jesus and Mary provided music during Mass at the recent Marriage Summit. Archbishop Wenski said the Mass in the chapel at Saint John Vianney College Seminary, Miami.