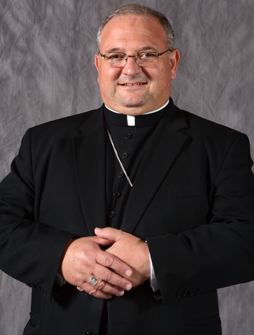 Priesthood? As a young man, Peter Baldacchino was adamant. "I wouldn't touch the priesthood with a 10-foot pole."

But God obviously had other plans for Miami's 10th auxiliary bishop, and they began to take shape at the 1989 World Youth Day in Santiago de Compostela, Spain.

"When I arrived there, the first thing I heard we were late in arriving was the voice of Pope John Paul II saying, 'Do not be afraid to be holy.' And I thought, 'Well, I better take my bag and go back home because this is not for me.'

"I didn't understand what it means to be holy," said Bishop Baldacchino, 53, a Malta native who laughs easily including at himself. He often repeats St. Teresa of Avila's adage "un santo triste es un triste santo," which roughly translated means, "A saint who is sad is a sad saint."

No surprise then, at the motto he chose for his episcopacy: "Ubi Dominus, ibidem laetitia" where God is, there is joy.

Bishop Baldacchino is approachable, warm and disarming, a man who worked with his hands and vacuumed his own church in the Turks and Caicos, where he was sent as a missionary from the Archdiocese of Newark. He is a priest not prone to quoting vague theology but one who makes deep points with clear examples a man, in fact, very much in the style of Pope Francis.

He speaks his native Maltese a mixture of Arabic and Sicilian as well as English, the country's other official language. In Newark, he learned Spanish, and in the Turks and Caicos he learned Creole.

He also attended a Redemptoris Mater seminary where his fellow students came from all over the world.

"My accent is no longer mine," he said. "It's not Maltese. It's not English. It's not Italian. It's a mixture of all. My niece says, 'Uncle Pete, you speak funny.'"

As for the priesthood, don't get him wrong. He grew up in a family of practicing Catholics. His father served on the parish council. The family joined the Neocatechumenal Way when Peter was 13. Theirs was the first Neocatechumenal community in the whole of Malta.

Moreover, Peter's father, Rinaldo known by everyone as Rene had studied for the priesthood with the Salesians in England for 11 years. His two younger brothers, John and Robert, also had entered the seminary and left. Both are now married with children.

Peter had never been inclined in that direction. He studied chemistry and science at the University of Malta and worked as technical manager for the Canada Dry bottling plant, where he was, by his own admission, "a workaholic."

He was 28 when he attended World Youth Day.

But he knew where to find it.

"If you want fruit and you don't have it, you go to buy it. I realized that the place to get these things was the Church," he recalled. "Concretely, for me, it came through the experience of the Neocatechumenal Way in my parish."

After a "brief but intensive discernment process," he was sent on a two-by-two mission during which he discovered a lot about himself, including "that I did not even recognize the poor that were around me. I did not see their needs. I was blind, completely blind."

That is when he felt the Lord calling him to the priesthood. But he did not respond right away.

"I had too many things on my mind," he said. "But then in a very concrete and historical way, the Lord started to move things from my path."

"I showed a disposition to serve the Church anywhere," he said. "I fell in love with the missionary aspect of the Church. It was like falling in love. And the Lord took it from there. Everything else was easy."

He wound up in Newark literally at random. Someone picked his name out of one hat, and matched it with the name of a Redemptoris Mater seminary in another hat. At the time, there were 12 such seminaries, operated by the Neocatechumenal Way, around the world. Today there are 100, including one in Miami which opened in December 2011.

"I could have gone anywhere," Bishop Baldacchino said. "The question was: Are you willing to serve the Church wherever? I had no choice. I did not choose."

And that's a good thing.

"There's always a danger to choose the place," he said. "Because I think that is a big trap. The moment in your mind you think you should be somewhere, in that moment, wherever you are, is not the right placeâ¦ To refuse to answer that question has been a great liberation for me. It means God is here. And if God is here, I'm staying. If he's not, I'm the first one to leave."

"Ubi Dominus, ibidem laetitia" (Where God is, there is joy)