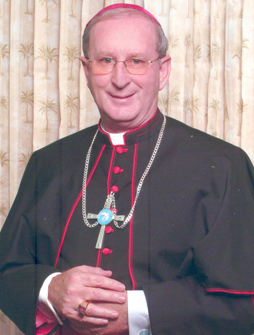 Miami 's ninth auxiliary bishop is Irish by birth but Floridian by choice. He cooks dinners for his fellow priests every Sunday afternoon. He is a jokester who likes playing pranks on people.

"There's no guile in him," said Father Bob Vallee, who teaches philosophy at St. John Vianney College Seminary in Miami , where Bishop Noonan served as rector since 1996. "His whole life is characterized by great, great gentleness. Even when he's mad, he's gentle."

Father Vallee and Bishop Noonan have worked together for eight years. "He's the best boss I've ever worked for. He's a very wise man. He has strong principles," Father Vallee said.

"He's a man dedicated to service. He's always serving," said Father Sean O'Sullivan, a retired archdiocesan priest whose family is friends with the Noonans in Ireland .

One illustration of Bishop Noonan's dedication to service, according to Father O'Sullivan, are the Sunday dinners he hosts for his fellow priests. The dinners are held at St. Rose of Lima Parish in Miami Shores and are open to any priest who wants to drop by. Bishop Noonan often does the cooking.

It would be easy to connect those meals with Bishop Noonan's role as director of the Ministry to Priests in the archdiocese. But the fact is the meals began long before he took on the role. His mother started the tradition around the time he was ordained in 1983.

"My mother said that priests should enjoy themselves Sunday nights" after they're done for the weekend, Bishop Noonan explained. She also thought they should do so in a casual atmosphere, not in a restaurant.

When she died in 1995, Bishop Noonan carried on. At the seminary, he began a similar tradition, cooking Monday nights for the faculty.

"He's approachable, caring and a hard worker, which we really need now," said Father Bob Tywoniak, pastor of Blessed Sacrament Parish in Fort Lauderdale and a classmate of the bishop. He remembers Bishop Noonan as a rather fun-loving seminarian.

"Therefore no seminarians can put one over on him," said Father Tywoniak.

"He has an Irish sense of humor and they get him back," said Barbara Reitberg, academic dean at St. John Vianney, recounting how the seminarians literally filled Bishop Noonan's room with balloons on his last birthday.

"He's the heart of the seminary," she said. "He's wonderful. The seminarians have great respect for him. He's fatherly. He's fair. He's really interested in their welfare as priests in formation. He's a real gentleman."

Bishop Noonan compared his role at the seminary to that of a parent.

"They (seminarians) have challenged me. They are like my children. If you know what it's like to have teenagers, you know how that can be," he said, adding that being seminary rector has been his favorite assignment as a priest.

"I didn't plan my life to become a bishop. I was having too much fun enjoying my priesthood," he said after his appointment was announced June 21, 2005 .

He then recalled something his mother told him soon after he was ordained: "'If you want to be a good priest, you better take care of the people.' I kind of live my life that way."

Archbishop John C. Favalora appointed Bishop Noonan as executive director of the Ministry to Persons, which includes priests, deacons, religious, vocations, associations of Christian faithful, and ministries to professional groups such as attorneys, doctors and policemen. Under the leadership of Archbishop Thomas Wenski Bishop Noonan was appointed Vicar General along with Bishop Estevez. He remained in that position until assuming his new role as Bishop of the Diocese of Orlando on December 16, 2010.

"God before me and God with me"

from the Breastplate of St. Patrick