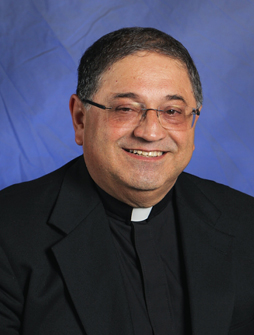 Bishop Enrique Delgado says the phrase, âMan plans, God laughsâ is âthe story of my life.â At the peak moment of his professional career as an industrial engineer, he left it all to become a priest.

âAs an engineer, I had everything figured out, even the day I was going to die, in plans,â said the Peru native, laughing, and adding that when he says something, God usually says something else.

But âas an obedient servant I do what God says, because he knows whatâs best,â he added, referring to his acceptance of a call to priesthood and now his appointment as auxiliary bishop of Miami. He is the first Peruvian to be named a bishop in the U.S.

Perhaps because of the influence of his late mother, Carmen Arroyo, a devout Catholic who went to daily Mass, Bishop Delgado was always close to the Church. He served as an altar boy and a catechist, as an extraordinary minister of Communion, and a helper at retreats.

âI was very, very involved,â said the bishop, currently pastor of St. Katharine Drexel in Weston. And although he felt God pushing him toward a deeper surrender, he hesitated.

In the meantime, he worked successfully as subdirector of a financial corporation in Lima, the Peruvian capital, a position that allowed him to travel to many countries. On one of those journeys, to Japan around 1989, he began to accept the other calling.

His flight made a stopover in Miami, where by coincidence he knew a seminarian, who invited him to spend the night at St. John Vianney College Seminary. There, he saw some âlate vocations,â which is what he considers himself, having entered the seminary at 35.

It felt good to see people his own age. âIn Peru, the seminarians are pretty young guys,â said the bishopâs sister, Pilar Delgado.

That led him to reconsider the possibility of the priesthood, and it marks the point where he began giving serious consideration to the idea. In Japan, two important events aided his discernment.

The first was a conversation he had with a Jesuit priest, who told him he had to give God time; and âif God is calling you, all the doors will be opened for you.â The new bishop recalls hearing those words and feeling as if âthey had come from God himself.â

The second took place his last day in Japan, after attending Mass in the chapel of the University of Sophia in Tokyo. He saw a shop selling religious articles and upon seeing an image of the cross, felt a great emotion.

The image contained an inscription in Japanese. A woman religious who worked at the shop pointed him to an English-language Bible and the passage that read: âFollow me and I will make you fishers of men.â

âIt was like a tremendous bolt of lightning hit me from head to toes, I was petrified,â Bishop Delgado recalled. âGod was speaking to me clearly. And I said to myself, Iâm no longer confused. I had to go very far to be able to listen.â

At that moment, he decided he would enter the seminary, at least for one year. It was the proof and confirmation he neededbecause, as an engineer, âeverything requires proof.â

On his return trip to Peru, he again stopped in Miami and spoke to the then rector of St. John Vianney Seminary, Father Thomas OâDwyer, now pastor of Little Flower Church in Hollywood.

The future bishop envisioned studying in a seminary in Peru, but at the same time he felt pulled to Miami. Thatâs when Father OâDwyer told him, âWhy go to Lima, if we need you here?â He answered that all his family lived there, and left it at that.

When he returned to Peru, his friend and mentor, Father Gabriel Genovard, advised him to study outside of Peru, where he would be tempted by many distractions; and also urged him to join the Franciscans, like himself.

Bishop Delgado accepted his first advice but not the second. âI think my call is to be a diocesan priest,â he said.

Then nothing happened. Until about a year later, when during another trip, this time to Puerto Rico, he attended the ordination of a priest from there for the Archdiocese of Miami.

He spoke briefly to Miamiâs vocations director at the time, after which they exchanged business cards. When he returned to Peru, he thought nothing would happen and he could return to his lay life. But two weeks later he received a package containing the paperwork for applying to Miamiâs seminary.

He traveled here once more and agreed with the vocations director that perhaps he needed to experience parish life in a local church, to find out if he liked it; and then he could enter the seminary.

Six months later, in February 1991, he left Peru and came to live in local parishes: first St. Agnes, in Key Biscayne, for a month, then Our Lady Queen of Martyrs in Fort Lauderdale, for six months.

That fall, he entered St. John Vianney Seminary, followed by more years of study at the major seminary of St. Vincent de Paul in Boynton Beach. He was ordained a priest for the archdiocese June 29, 1996, by Miamiâs then auxiliary bishop, AgustÃ­n RomÃ¡n. The ordination took place in Peru, in front of all his family and friends.

It was one of the most spiritual days of his life, Bishop Delgado recalled. âAt that moment, you realize that you are no longer yourself, you are a servant of God. Itâs a spiritual moment where you feel very humble and at the same time completely connected with God.â

In October 2017, after 21 years of service in various archdiocesan parishes, Pope Francis named him a bishop â something he humbly accepted but also did not expect, he said, because he has always considered himself a parish priest.

As for his delay in entering the seminary, he says, âthe things of God donât happen right away, they develop. Theyâre situations and things you live and desire. I felt that God was calling me.â

Omnia possum in eo qui me confortat(Philippians 4:13): âI can do all things through Him who strengthens meâ