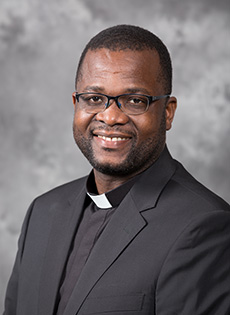 Born Feb. 10, 1972, in Cap-Haitien, Haiti, Father Jeanty came to the U.S. in April 1990 to join his parents, who were already living in Pompano Beach. He began studying accounting at Broward Community College while working full time, but entered the seminary in August 1996. He was ordained for the archdiocese on May 15, 2004, and served as associate pastor at St. Bartholomew Parish in Miramar until 2006, when he went to Rome to study canon law. He was named archdiocesan chancellor for canonical affairs in September 2010, and also serves as a judge in the Metropolitan Tribunal and pastor of St. Philip Neri Parish in Miami Gardens.

"It was only after I came here. I was doing everything else â pursuing a career, I had a girlfriend, I was involved in youth ministry and church. â¦ There was a void in my heart calling me, as if this wasnât enough.â The climax of his discernment came, by âGod-incidence,â on the same date he would later be ordained a priest, May 15: âJesus appeared to me in a dream. He said, âChanel, come to me.â I woke up from the dream; never slept the rest of the night. I called up the vocations director that morning and said, âIâm entering the seminary"

"Itâs all a mystery to me. The seed was planted in my heart."

"Probably a college professor, teaching philosophy or something that has to do with humanity, with the arts. I love philosophy."

"Thereâs no way that I would imagine that I would end up being the chancellor of the archdiocese. The seminary doesnât prepare you for that."

"To stand in the threshold of being the very incarnation of God is so mind-boggling. Hopefully you know your limitation."

"To stand in the threshold of being the very incarnation of God is so mind-boggling."

"To be able to satisfy the hunger that everyone has for the infinite, the divine, for God. Thatâs where I come in."

"I know people expect a priest to be a role model and a great human being. Thatâs as it should be. But weâre certainly not supermen. All of us have to struggle with our limitations."

"He likes to go to the beach. âI simply enjoy the outdoors, read a good book."

"Kingdom of Heaven,â âGladiator,â âAvatarâ and other epic-type movies whose message is, âWhat good would it be for a man to live in this world and not make it a better world?" 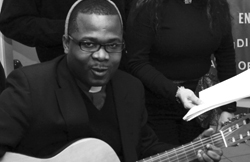 Father Jeanty, seen here during a Pastoral Center Christmas party, taught himself to play the guitar while in the seminary. Eventually, he bought an acoustic guitar for $1,200. âItâs still my companion. It was a great investment.

"As long as it sounds good, thatâs me. Give me a good sound, a good lyric and I love it already"

"My mother. She wouldnât expect from me anymore than what she knows I can do. But she accepts me even when I donât do what she knows Iâm capable of. If I could live up to her, I would wake up a better man every day."

"To not have made the best of the opportunities I have had as a person."

"Whenever I say âyesâ to a call to serve, itâs going to be the place of (my) greatest joy."

â"People who arenât as easygoing as I am. I drive them nuts. They say Iâm too relaxed, too peaceful. Iâm always keeping my cool"

"None. The stupid things that Iâve done have brought me to be the person that I am now and helped me to see a different perspective, to be a better human being for others"