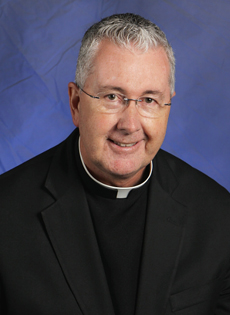 Born Oct. 6, 1952, in Washington, D.C., Father Hogan is the second of three children. His family moved to Florida in 1965 and became active in Holy Rosary Parish in Perrine. He entered St. John Vianney Seminary as a ninth-grader in 1966 and was ordained a priest for the Miami Archdiocese in 1980.

After serving at St. Ignatius Loyola in Palm Beach Gardens and teaching at the minor seminary, he was sent to Rome, where he obtained his doctorate in liturgy. In addition to his archdiocesan duties, Father Hogan serves as North American director of the Patrons of the Arts of the Vatican Museums, a group dedicated to preserving the artistic and historical treasures of the Vatican.

His early entrance into the seminary:

"It first hit me when I was 10 or 11, when I started serving Mass." He played at Mass at home, wearing a Superman cape for robes and using nickel-size candy wafers as Communion. "It was a way of imitating what you saw at Mass. There was a majesty and a beauty (there)." Then he went to an ordination at St. Mary Cathedral and "I was just blown away by the dedication that I saw."

An architect or someone involved in politics. "Both work on building the physical and also building a better life for people, a better community."

At age 12, he played the organ at weekend Masses at Christ the King and Holy Rosary in Perrine. He left the seminary for a while and worked as a salesman in the commissary of an Air Force base, but he was not really good at it. "I always would tell people, this is a good deal or a bad deal."

"Once the priest thinks heâs better than the people, thatâs the beginning of the destruction of his vocation."

"I love going out to dinner with priest friends. Anything where you can relax and enjoy being with people who understand what your daily life is about."

"Iâm a newsaholic. I watch a lot of (talk shows) until my blood pressure goes up. Thatâs the political side of me."

"Christ is the ideal priest. All we can attempt to do is be the alter Christi, try to be like Christ."

"That priests really are not in touch with what happens in the everyday life of people in the parish. When you wake up at 6 oâclock to open the church doors and 20 people start coming to you to talk about whatâs going on in their lives, you sort of know whatâs going on." 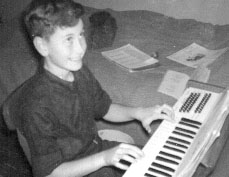 Young Terence Hogan playing the piano at home. At age 12, he played the organ at weekend Masses at Christ the King and Holy Rosary in Perrine.

"Once the priest thinks heâs better than the people, thatâs the beginning of the destruction of his vocation."

Mother Teresa and St. Francis of Assisi: "The grace that she shared with others is just a constant opportunity for meditation on how we really are called to be." His story parallels Mother Teresaâs: "That constant love for those who have nothing, and yet done joyously."

"I feel that we as a society are too rapidly losing respect for the individual as a human being and as a spiritual person. Once the ego becomes God in our life, then we are doomed to our orig-inal sin. How often do we as individuals think we know everything?"

His job with the Patrons of the Arts:

"One of the best parts of the Patrons job is that I often have the Vatican Museums or the Sistine Chapel all to myself."