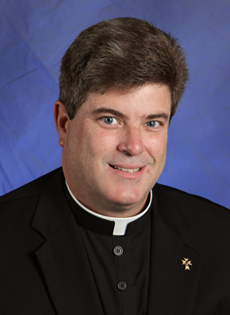 Born Dec. 22, 1966, in San Juan, Puerto Rico, Father Hernandez considers himself a "Cuban-Rican" because he grew up on the island but his parents and grandparents are from Cuba. The middle of five children - two older brothers, two younger sisters - he studied in Passionist schools before entering the seminary in Miami in 1987. Ordained in 1994, he served at Epiphany Parish in South Miami and Sts. Peter and Paul, Miami before becoming the first Hispanic pastor of the historic St. Mary Star of the Sea Parish in 2002. It is the third oldest parish in Florida.

On studying for the priesthood:

"When I was a kid I was not much attracted to studies. I said to the Lord when I graduated from high school, the shorter the career, the better. Like always, the Lord has a good sense of humor. So he said, 'Oh, yeah, you're going to study eight years for the priesthood.'"

"I wanted to serve people. Really, the life of the priest did not interest me. What attracted me was the service that the priest does for the community."

"It was my first time away from home and I was learning English. God wanted me to stay, because it was a terrible year, difficult to adjust."

Good advice from a fellow priest:

"I go to Miami and eat with friends.

"Friends" (he has a collection of episodes) and "The Golden Girls": "I learned English watching 'Golden Girls.'"

How he makes decisions:

"I always go to the tabernacle and pray to the Lord."

"I probably would have finished accounting and be in business - maybe selling, like my father."

"I don't want someone to leave the Church because of me."

During the height of the priestly sexual abuse crisis in 2002: "Do I need to be in this? I can be an active parishioner like my father is. I don't need to be labeled as one of them."

"To always make sure that what you do, you do it right ... I don't want someone to leave the church because of me."

For listening: Soft Spanish melodies by artists such as JosÃ© Luis Perales; for dancing: "If there's salsa or merengue I will dance, because the music gets into me."

He owns 60 Nativity sets. "I love Christmas time and I love nativities. I'm the one who sets up the nativity at my church." 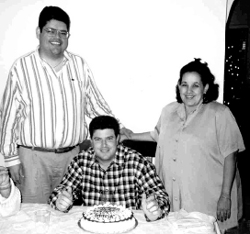 Father Hernandez, who describes himself as "a social person," celebrates his birthday with former parishioners from Sts. Peter and Paul Parish in Miami, Luis Acosta and his wife, Kirsy. He celebrated their wedding and baptized their children.

"Eating - you can see that. ... For three years I used to cook on Sundays in the major seminary. I don't have time now." He also likes antique shops. "I just look. I don't have the money to buy."

Persons he most admires:

"My parents and grandparents - they were people who were not rich but they were so centered in what they had to do in life that they gave me a model to follow."

"Not death, but suffering a long illness, a heart problem, or cancer. As a priest, you don't have anyone. ... If that happens to me, who's going to take care of me?"

"My heart is calling me to do it - start a mission church in Stock Island. There are a lot of Hispanic and Haitian people over there. Even though they come to the big church, they don't feel part of the big church. I feel the responsibility and the need - if they can't come to me, I have to go to them."