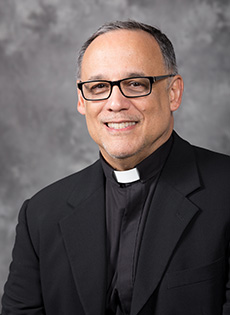 Born in Cuba in 1957, Father Corces grew up in Miami and was ordained for the archdiocese in 1988. As vocations director, he is responsible for recruiting and screening candidates to the priesthood. He also helps out at Prince of Peace Church in Miami, teaches lay ministry courses and has been involved with the HIV/AIDS ministry.

Currently Fr. Corces is Parochial Vicar at Our Lady of Divine Providence Church.

"I tried going into the seminary right after high school and it didn't work.
I was too young, too immature." Years later, he began questioning his choice again: "During a New Year's Eve party in which I was having the best time,
I stopped and looked around and said, is this what
I want? And the answer was very clear. No. That is not for me."

Later still, during a visit to the missions in Honduras, he realized his call was to the priesthood:

"First of all, a human being filled with love for life and God and deep faith that, in and though that broken humanity, God blesses the world. You have to be filled with life, definitely."

"A teacher or a pilot. I love to tach and I love planes."

"I am successful when I know that the person has been touched by the spirit of Christ - when I have facilitated that encounter. You see the fruits. You see the change. Those are moments of sucess."

"9/11. Disappointment at our own humanity, that we are capable of doing something like that."

"9/11. I was so angry in the morning, and by the afternoon, I saw how human beings are capable of the highest, heroic choices."

Gandhi. "I think he was an incredible man who was able to free a country without shooting a gun."

"I fear being old, sick and helpless, because I see it every day."

Worked in a bank's accounting department for 7 years: "I hated it." 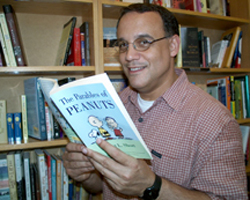 "Finding myself without answers and therefore dealing with the frustration of being powerless before cerain situations. Having to accept that I do not have all the answers."

Loves going to the movies and spending time in bookstores: "I'm a bookworm. And when the weather is nice I go to the beach. I love the ocean."

"Myself and the Gospel."

"I am successful when I know that the person has been touched by the spirit of Christ - when I have facilitated that encounter. You see the fruits. You see the change. Those are moments of success."