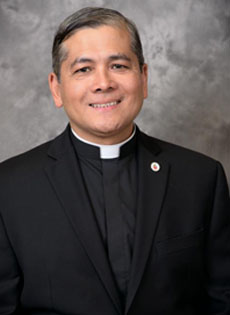 Father Edgar âGaryâ De Los Santos, 54, was born in Zamboanga City, Philippines, the youngest of six children. He has a degree in business administration and came to the U.S. in 1991 to work as an investment banker. Settling in Miami Shores, he joined St. Rose of Lima Parish, where he first assumed the duties of sacristan and eventually worked as parish manager.

An adventurous and competitive soul, he took evening culinary classes at Johnson & Wales University in North Miami and opened his own catering company. Heâs run the Tough Mudder and 17 half marathons, ranked as a âpower sellerâ on eBay, won a key lime pie-eating contest in Key West and a Honda Element from a local radio station, and even applied to compete on the Food Networkâs âChopped.â

âYou wonât catch me watching TV,â he said. âTwenty years from now I can say my life is colorful. I have a lot of stories to tell.â

He began discerning a vocation to priesthood in 2009. The trigger came one night as he was closing the church after a wedding. Alone in the dark, he was walking back to the sacristy when he looked at the crucifix on the altar. âIt was the only thing lit. And then suddenly I said, what if you become a priest?â

He had completely forgotten that, as a child, he used to play at being a priest, using the white cardboard under the lid of a Nescafe jar as the host.

âI want challenges,â Father De Los Santos said, and fate has obliged. He left everything behind to enter the seminary, where he was always the oldest of the men. His mother and one sister died during his first three years of study.

âChallenges are still coming, and God is helping me a lot,â he said. âGod was with me all those years and will always be with me.â 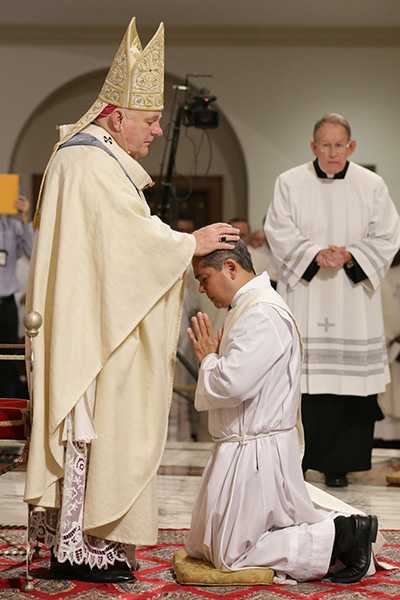 His first assignment was to St. Gregory in Plantation.