SOUTHWEST RANCHES | Women of Grace, a Catholic apostolate to women, welcomed 31 more women into its Spanish-language Mujeres de Gracia, in a ceremony at St. Mark Church.

The event was marked by dinner, certificates and testimonies. Capping the night was the induction ceremony, when the new members were given their pink Women of Grace shirts. 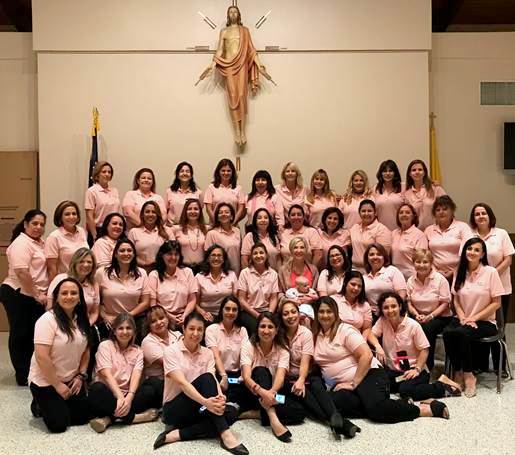 Members of Mujeres de Gracia, the Spanish-language version of Women of Grace, pose for a group photo after a recent induction ceremony.

Members of the St. Mark chapter also helped start a new WOG group at St. Gregory Church, Plantation. That group was launched May 31 with 14 participants and four facilitators. The latter had finished their Llenas de Gracia study in June 2016 at St. Mark.

Women of Grace was founded in 2003 as an outreach of Living His Life Abundantly Inc., a 501(c)(3) nonprofit corporation. Purpose of the outreach is ongoing spiritual formation of women, presenting a vision of dignity and femininity with the Virgin Mary as the exemplar.

Besides its study programs, Women of Grace works through radio and TV programs, retreats and conferences, and its interactive website. It also offers further training through its Benedicta Leadership Institute for Women, aimed at influencing government agencies and other organizations. The next Benedicta Leadership Enrichment Seminars are set for July 6 in Malvern, Pa., then Sept. 7 in Albuquerque, N.M.