Legal profession is a noble vocation 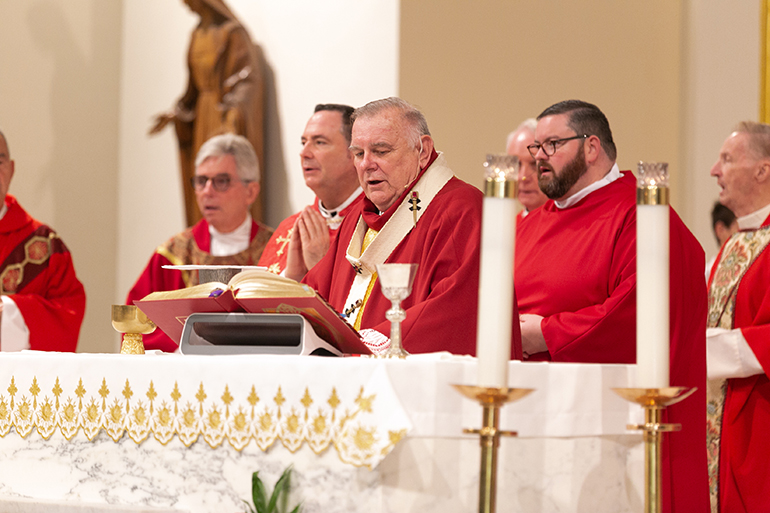 Archbishop Thomas Wenski is surrounded by concelebrating priests as he presides at the 30th annual Red Mass of the Broward County-based St. Thomas More Society of South Florida, Sept. 26 at St. Anthony Church in Fort Lauderdale. Catholic judges, lawyers and other legal professionals attended the event.

Archbishop Thomas Wenski preached this homily Sept. 26, 2019, during the celebration of the annual Red Mass for those in the legal profession in Broward County. The Mass is organized by the St. Thomas More Society. It was celebrated at St. Anthony Church, Fort Lauderdale.

I am honored to be here at St. Anthony’s this afternoon to celebrate this Red Mass again at the request of Broward County’s St. Thomas More Society. We invoke the Holy Spirit and his sevenfold gifts on the men and women of the bar, attorneys and justices, civil servants and elected officials.

Some people refer to the means through which they make their livelihood as “jobs”; you, however, are not just working at a job, you are responding to a calling, a vocation. The legal profession is a noble calling – one that calls for continual courage, vigilance and a dedicated commitment to the people you serve and to our system of justice.

The great achievement of the American people has been the attainment of liberty for its citizens through the rule of law. At its best, in our system of justice, the rights of the individual and proper respect for property ownership are protected from the grasp of the powerful and wealthy. The important role that law has played in the struggle for liberty and equality in our nation is seen clearly in the architecture of any major American urban center – in other countries the most significant structure might be the cathedral in the city center, and maybe perhaps the city hall, both usually built facing each other across a public square; but in this country, the most significant structure in any major downtown in America is usually the courthouse.

And we could not understand American history without taking into account those trained in law. Men like John Adams and Thomas Jefferson laid the foundations for our system of government. Jefferson – a lawyer – penned the Declaration of Independence; Adams – a lawyer – insisted that the Bill of Rights be a part of the Constitution. Our society has maintained through much of our history social peace and harmony, avoiding for the most part the bloodshed and violence that in other countries impunity begets. And this is thanks, in large measure, to the rule of law and those men and women who make it possible.

Lawyers too tend to be consummate volunteers – as well as public servants. Lawyers have served as legislators and as presidents – but, lawyers serve also as little league coaches, volunteer board members of their churches, synagogues and civic organizations. So much of what we take easily for granted in our civil society is only made possible because of the dedication and commitment to the rule of law of men and women like yourselves.

Lawyers across America and certainly here in South Florida have always been at the forefront of the battle against injustice and inequality and for the fight to preserve our liberties. We would only have to remember the contributions of two exemplary Catholics and jurists, Clyde Atkins and Eugene Spellman, to remind ourselves that we Catholics have not been sitting on the sidelines in these struggles. And, of course, we look forward to the contributions of a future federal judge nominated recently by President Trump as a U.S. District Court judge, Raag Singhal, a member of Broward’s St. Thomas More Society. So, you should be proud of your profession – despite all those bad jokes.

Now, I don’t mean that you come to this Mass to see and be seen by the judges sitting in the first row. We come to encounter through Word and Sacrament the one who is Lord and Judge of History – Jesus Christ. Knowing that judge – and seeking that all that we do, we do under his sight and in view of his perfect law of love – will help you to be not only good lawyers but also great lawyers. 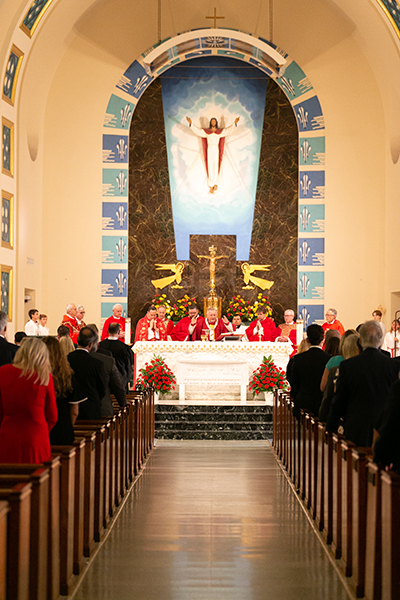 A good lawyer, of course, will honor his oath and serve his client diligently; but a great lawyer will not be afraid to challenge injustice when he/she finds it and will not refuse to help those most vulnerable. We all need to recognize the debt of gratitude we owe to those of the legal profession who “give back” through hours of pro bono service. Equal justice is just a slogan unless the justice system is accessible to all.

I would urge you to double your efforts to assist through pro-bono representation the hidden, underserved populations in our community: homeless, the working poor, the immigrant family, the vulnerable child or battered woman. And let me make a plug here for Catholic Legal Services of the Archdiocese of Miami. Catholic Legal Services of the Archdiocese, with offices in Miami-Dade and Broward and a staff of 28 attorneys, sees between 2000 and 3000 people every month. As Randy McGrorty would say, he can’t say he helps all of them (our broken immigration system does not provide many paths for resolving many of their situations) but he does see them; and when these lawyers can help resolve what had seemed to be an intractable immigration problem, they literally give their clients a future of hope.

Catholic Legal Services represent many of the unaccompanied minors who have been paroled to relatives in South Florida. Sometimes, they could use some pro-bono assistance. Maybe you could help?

Sometimes you will find the law you practice without any billable hours attached to it will be your most satisfying – pro-bono work will help you remember why you became lawyers – and that the practice of law is not just a job – it’s a calling, a noble calling.

The Red Mass recalls the memory and invokes the intercession of a remarkable Catholic lawyer, who proved to be a “Man for all Seasons,” Sir Thomas More. In the year 2000, St. John Paul II named St. Thomas More the patron of statesmen and politicians. At that time, John Paul wrote about Thomas More:

“His life teaches us that government is above all an exercise of virtue. Unwavering in this rigorous moral stance, this English statesman placed his own public activity at the service of the person, especially if that person was weak or poor; he dealt with social controversies with a superb sense of fairness; he was vigorously committed to favoring and defending the family; he supported the all-round education of the young. His profound detachment from honors and wealth, his serene and joyful humility, his balanced knowledge of human nature and of the vanity of success, his certainty of judgment rooted in faith: these all gave him that confident inner strength that sustained him in adversity and in the face of death. His sanctity shone forth in his martyrdom, but it had been prepared by an entire life of work devoted to God and neighbor.”

“Profound detachment,” “joyful humility,” “balanced knowledge of human nature,” “judgment rooted in faith,” “confident inner strength,” these are qualities that describe a great lawyer, a lawyer who, because he knew the judge of heaven and earth, could say, “I am the King’s good servant but I am God’s servant first.” May you aspire to that same greatness – as individuals and as officers of the court. 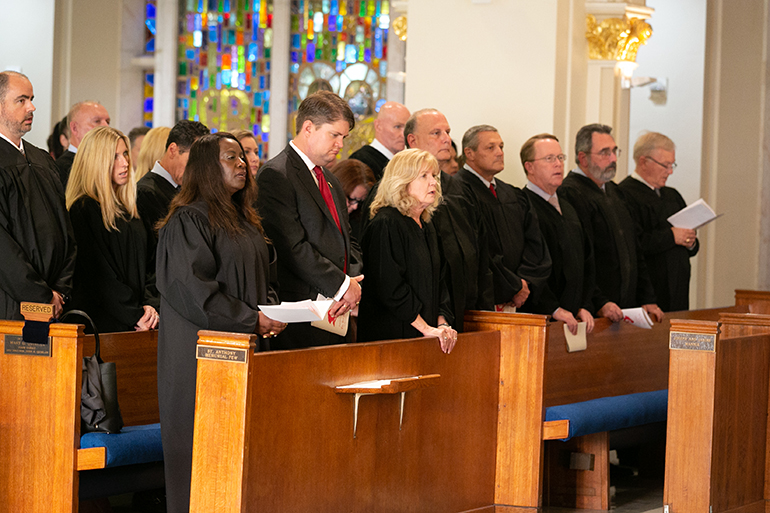