God's love is gratuitous and superabundant 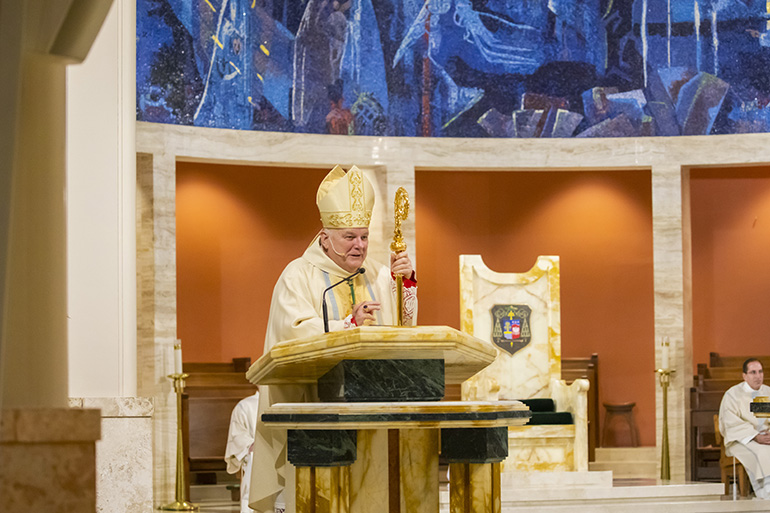 Archbishop Thomas Wenski preaches the homily during the Thanks-for-Giving Mass celebrated at the Cathedral of St. Mary, Nov. 23, 2019.

Archbishop Thomas Wenski preached this homily Nov. 23, 2019, at St. Mary Cathedral, during the annual ThanksforGiving Mass in recognition of those who donate their time, talent and treasure to support the work of the Archdiocese of Miami.

This weekend we celebrate the solemnity of Christ the King – and we will soon gather with family and loved ones to observe a great national holiday, Thanksgiving Day.

But, if Thursday is “Thanksgiving Day,” today is the Archdiocese’s “Thanks-for-giving Day.” As Archbishop, I am grateful to you because through your support of the ABCD, we as a Catholic community in South Florida are truly “one in faith, one in hope, and one in charity.” The ABCD supports the good works of the Church in South Florida above and beyond what happens in our parishes. And this is possible only through your generous stewardship.

One of the central teachings of the Second Vatican Council is that the human person can only realize himself or herself as a human being through the sincere gift of himself or herself. True human fulfillment, true happiness, is not found through self-seeking or self-assertion but through self-giving. And this gift of self is modeled for us by our Lord Jesus Christ – who gives himself to the Father for us on the cross.

Again, thank you for giving.

As I said, this weekend, we celebrate the solemnity of Christ the King. At first glance, since today we are not governed by kings, we might be tempted to regard such a feast as an anachronistic relic of a long past era. The only kings most of us have heard about are the king of diamonds, the king of hearts, the king of clubs and the king of spades. Yet the solemnity of Christ the King – as a liturgical institution – is quite recent. It was established not by some medieval pope but by a quite modern-day one, Pope Pius XI in 1925.

The pope was not engaging in some flight of fantasy; in fact, by adding the feast of Christ the King to the liturgical calendar he wanted to put his thumb in the eye of a world which had already begun to pretend that it could organize itself without God. The October Revolution of 1917 in Russia had already been consolidated and with it, under the spell of radical secular ideologies of both the right and the left, the 20th century was well on its way to becoming the most violent, the most murderous in history. Whenever and wherever the human race seeks to organize itself without God or against God, confusion is sown – and the harvest is hatred, distrust, violence.

This was the climate in which this feast was born – and perhaps what motivated the pope to establish this feast was revolution in Mexico. There, a revolutionary government was established which persecuted the Church with a ferocity that paralleled what was already happening in Soviet Russia. There in Mexico, hundreds, if not thousands, were killed in the name of freeing people from religious “superstition.”

These martyrs and the millions who died in the successive holocausts of the 20th century remind us that when we pretend to organize the world without reference to God and his truth, we end up organizing the world against man himself, because if God does not matter, nothing much else will matter either.

And so, Pope Pius XI, in establishing this feast day wished to remind us that Jesus is the world’s true ruler and judge. Of course, this King is unlike the any other. His crown is a crown of thorns; his throne is a cross of wood.

Throughout his ministry Jesus shared forgiveness. He dies breathing it. He dies as he lived – reaching out to the distressed on either side of him. Even during his own agony, he has time for others.

He tells the one thief, “Today, you will be with me in Paradise.” This thief is now known as the “good thief” – good because he stole paradise. What a perfect illustration of God’s mercy. Imagine, this thief made it to heaven even before St. Peter – he even got there before the Blessed Mother.

God’s love is gratuitous and superabundant. His love should inspire within us those values which create generosity, a generosity that transcends a human return, but one that calls us to give selflessly because of the gifts we have been given. In the Holy Sacrifice, the Holy Eucharist, the Lord gives himself to us in the communion of his Body and Blood so that we might give ourselves to him and to one another. When we make our lives a gift for him and for others, we acclaim Jesus as our Lord and King.

As your Archbishop, I am grateful – deeply grateful – to each and every one of you for your stewardship.