Travel light, announce the Kingdom: a task for all of us

In the responsorial psalm, our refrain was “Your friends make known, O Lord, the glorious splendor of your Kingdom.” In Haitian Creole – the language that I celebrated Mass and preached in daily for 18 years – the word "saint" is translated Zanmi Bondye; simply, a friend of God.

Luke certainly was one such friend – truly a Zanmi Bondye. Of course, today we welcome our guests, and friends, to St. Vincent de Paul Regional Seminary. We value your support of the seminary. We appreciate our friends – and we gather around the Eucharistic table because we all aspire to be not only friends of the seminary but also Zanmi Bondye, friends of God. 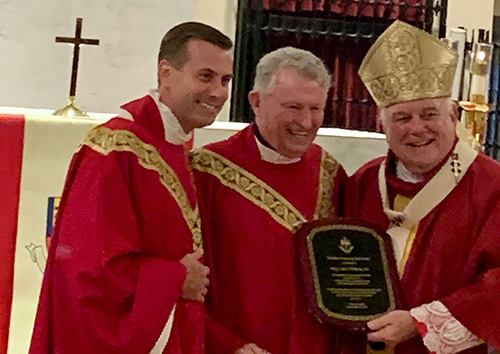 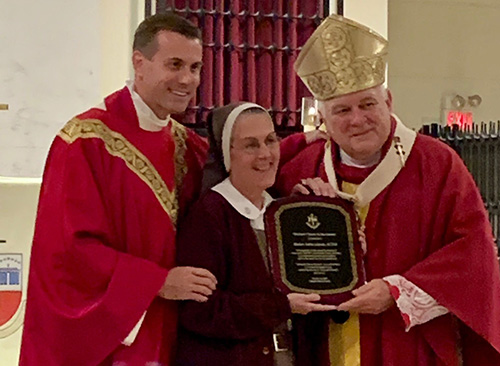 Archbishop Thomas Wenski and Msgr. David Toups, left, rector of St. Vincent de Paul Regional Seminary in Boynton Beach, recognize Mother Adela Galindo, founder of a new religious community, the Servants of the Pierced Hearts of Jesus and Mary, just before the Friends of the Seminary annual dinner Oct. 18, 2019. "The community continues to grow and flourish even beyond the Archdiocese of Miami," Archbishop Wenski said.

St. Luke, as we learn from the first reading, was a companion of St. Paul. He was also thought to be a physician and an early disciple of the Lord. He gave us the Gospel that bears his name as well as the account of the early history of the Church in the Acts of the Apostles.

Thanks to Luke, the Church’s prayer life is enriched with the Benedictus, the Magnificat and the Nunc Dimittis. Again, thanks to him and his Gospel, we have Jesus’ parables of the Good Samaritan and the Prodigal Son.

And, only in his Gospel, perhaps because of his being a physician, he describes Jesus as “sweating blood” during his agony. Luke, the physician, tells us how the power of God in Jesus seeks and finds those lost in the black labyrinths of sickness and despair.

The Gospel according to St. Luke had to be the favorite of this seminary’s patron, St. Vincent de Paul. St. Vincent de Paul had two great passions: the poor – he was the Mother Teresa of his age – and the formation of the clergy.

Jesus tells his disciples: “Carry no bag, no money, no sandals...” Just tell the people you meet “good news,” the “Kingdom of God is at hand for you.” Tonight, we will honor two people – as is our custom – with the St. Vincent de Paul Award. Msgr. Jude O’Doherty, when he arrived in the archdiocese shortly after his ordination in Ireland, he probably did not have much more than the shirt on his back when he stepped off the plane into Miami’s summer heat and humidity. But he has been preaching “good news” ever since. Recently retired as the long-time pastor of Epiphany Parish in Miami, he served four archbishops – which could not have been easy. But as St. Paul says in Second Corinthians, “For you gladly put up with fools, being wise yourselves.” (cf 2 Corinthians 11: 19). A wonderful pastor of souls, a more than capable administrator, he chaired our pension board for more years than he would like to remember, coordinated Pope John Paul II’s visit to Miami in 1987, served on archdiocese finance councils, built churches, school additions and much, much more.

Our other nominee is Mother Adela, foundress of the Servants of the Pierced Hearts of Jesus and Mary. Founded about 27 years ago, this community of religious numbers almost 50 – they serve in a variety of ministries. As vowed religious – like those 72 sent out by Jesus – they necessarily “travel light” but through their lives they simply announce that “the Kingdom of God is at hand.” That seems to me an apt description of the consecrated life, and what the Servants under Mother’s leadership aspire to do.

But all of us here have a common vocation – our baptismal vocation – the call to holiness; that is, the call to become a Zanmi Bondye, and as a friend of God to make known his glorious splendor so that those lost today may still be found by God who never ceases to search us out and knows us to the core of our beings.

That’s what the 72 disciples did as they visited those villages ahead of Jesus; that’s what St. Paul did despite hardship and disappointments; that’s what Luke did as he wrote his gospel and the Book of the Acts of the Apostles; that’s what St. Vincent de Paul did; what our honorees strive to do; and so should we.

“The harvest is abundant, but the laborers are few.” Jesus says, “so ask the master of the harvest to send out laborers for his harvest.” Whether we are called to be “laborers” in the harvest field or petitioners praying to the harvest master, all of us are responsible for the mission which is what brings us here tonight as friends of the seminary, as friends of Jesus and as Zanmi Bondye.