Be 'intentional' not 'accidental' Catholics

Archbishop Wenski's homily at 50th anniversary of St. Henry Parish, on the feast of the baptism of Jesus 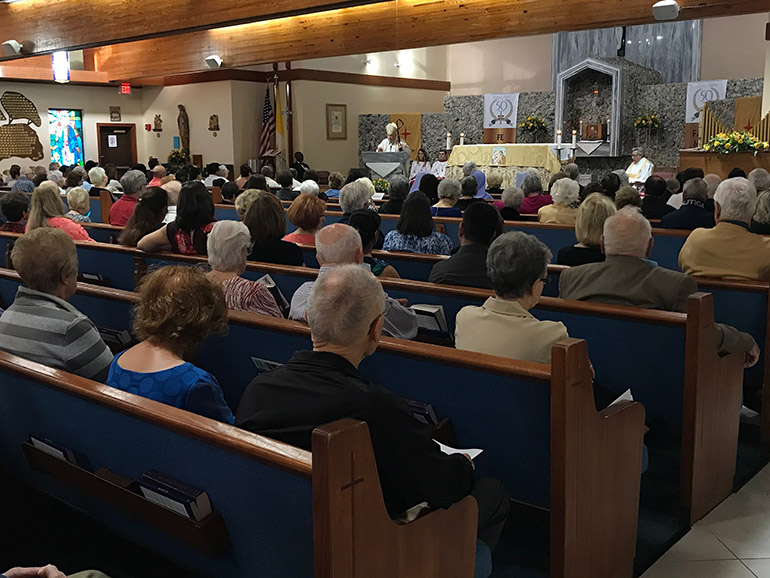 Archbishop Thomas Wenski preaches the homily at the Mass marking the conclusion of St. Henry Parish's year-long celebration of its 50th anniversary, Jan. 11, 2020.

Archbishop Thomas Wenski preached this homily during the vigil Mass Jan. 11, 2020, at St. Henry Church in Pompano Beach. The parish was concluding its year-long celebration of its 50th anniversary.

The evangelist Matthew makes this event, of John baptizing Jesus, into a second “Epiphany” – that is, a new and further manifestation of who Jesus is. 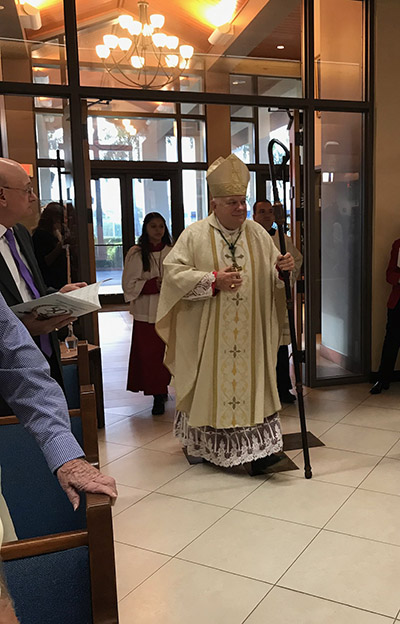 The baptism of Jesus, then, is a type of synopsis – or summary – of his whole life. This baptism by John announces and anticipates the other baptism that awaits him, his baptism in blood when he dies on the cross to atone for our sins.

We, when we are baptized, received not the baptism of John; our sacramental baptism is a participation in Jesus’ death and resurrection. As we are bathed in the waters of the baptismal font, we die with Christ – and we rise with him – to a new life as sons and daughters of God.

In our baptism, the Father also speaks to us and says to each one of us, “You are my beloved Son.” The Spirit also descends upon us – and we are anointed, we are christened so that we too, like Jesus, will do the will of the Father. Anointed as Christ was anointed, we become “Christians”.

Each of the three Scripture readings paints for us, as it were, a portrait of Jesus. They highlight different aspects of Jesus’ identity. Isaiah speaks of the Suffering Servant of God – and we can only understand fully the import of Isaiah’s prophecy in the light of Calvary.

Jesus is that long desired Servant of God who will redeem his people. But, even more, as we see in the Gospel, Jesus is the Son of God. A voice from heaven is heard. It is the voice of the Father who says, “This is my Beloved Son in whom I am well pleased.”

And as the voice speaks, the Spirit descends upon him and anoints him as the Messiah, the Christ. In the second reading, from the Acts of the Apostles, Peter speaks of Jesus as one who went about “doing good.”

And so, the portrait of Jesus that we see in the readings today is a portrait of the Son of God who stands in solidarity with a suffering and sinful humanity. 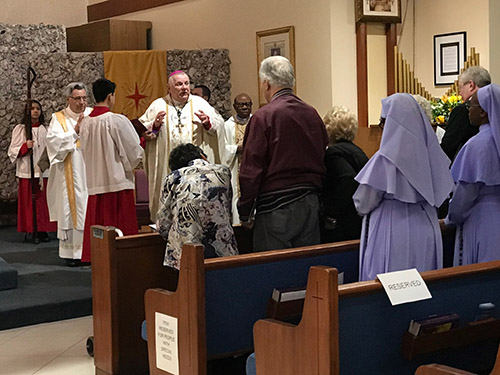 Tomorrow is January 12 – the tenth anniversary of the earthquake in Haiti. This week, of course, there was also an earthquake in Puerto Rico. Much damage but no loss of life. The devastation in Haiti, as you all know, was widespread and terrible; houses, schools, churches were destroyed, and some 350,000 people died.

There is the story of an elderly woman praying outside of what was Sacre-Coeur Church in Port-au-Prince. The only thing that had not been destroyed was an outdoor shrine; a concrete crucifix remained standing amid the rubble. A reporter passed by, saw the woman and asked, “Where was God?” And the woman just pointed to the crucifix. There was God, crucified on the cross, amid the pain, the suffering and the grief of the Haitian people. She understood that God was there, suffering with the people. This woman in her faith perhaps understood the mystery of what we have celebrated during this Christmas season better than the more learned theologian. God became man in Jesus Christ to take upon himself our human condition and redeem it. Jesus became man, he accepted to be baptized by John and he went to the cross – all in solidarity with us.

As we see in the solidarity of Jesus with all of mankind as he is baptized in the River Jordan, the antidote to what Pope Francis would call a “throwaway culture” which would dispose of the poor, the weak, or the inconvenient is the globalization of solidarity. 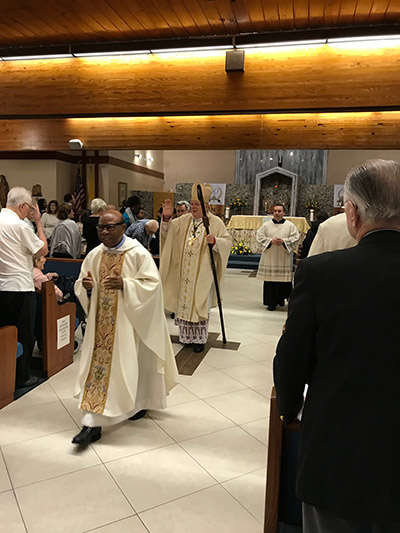 Our parishes then should be places of true communion and participation – where everybody counts because everybody is a “somebody,” redeemed by Christ and destined for eternal life. And St. Henry’s is such a place and has been for a half century. In a world which increasingly seems like a barren dessert because people pretend that they can organize society or live their lives as if God doesn’t matter, parishes are called to be oases where people can find rest and strength as they continue their journey towards the Promised Land of heaven.

With his baptism, Jesus begins his journey in solidarity with us all – he indicates an itinerary for us to follow so as to fulfill, as Jesus told John, “all righteousness.” However, as we are only too aware, many of the baptized have yet to fully embrace or understand what it means to be a Christian and what a Christian is supposed to do.

Today, one of the great challenges we face in our parishes is to help awaken and activate the grace of baptism in each of our parishioners so that each one feels called to be a “missionary disciple.” And, I guess, this is how you parishioners of St. Henry are to face the next 50 years. “Missionary disciple” is a favorite phrase of Pope Francis and by it he means that every baptized person should be a “disciple” – that is, an intentional Catholic and not just an accidental Catholic; to be a Catholic from conviction and not a Catholic out of habit; and that every baptized person should be a “missionary” – sharing the faith by witnessing to it by a coherent life style.

Jesus shows us the path to follow so that we too might be the beloved sons and daughters in whom the Father is also well pleased. That, of course, is the path that you, parishioners, of St. Henry are to follow, as you turn the page and open a new chapter in this history of this parish.

Other News from St. Henry Church