Sow the seed of his Word, dispense his Divine Mercy, nourish the faithful with his Body and Blood

Archbishop Thomas Wenski preached this homily during the ordination Mass for Jesuit Father Julio Minsal-Ruiz, a Miami native, parishioner at St. John Neumann, and graduate of Belen Jesuit Prep who is now teaching at his alma mater. The ordination Mass was celebrated Jan. 11, 2020 at Gesu Church in downtown Miami.

Julio, having discerned with you a vocation to the priesthood, a vocation to be lived out within the charisms of the Society of Jesus, your superiors have asked me to ordain you a priest. And on behalf of the Jesuits, allow me to welcome Julio’s parents and siblings to this ordination Mass. Un saludo especial a su abuela, Sara – no podemos descontar la influencia y el apoyo de los abuelos en la vida de sus nietos. Abuela Sara, estamos muy bien agradecidos por el papel que tuviste en el discernimiento vocacional de Julio.

A priestly vocation, in the words of the Pope St. John Paul II, is both a “gift and a mystery.” To embrace the gift and to enter into the mystery which enables the priest, in communion with Jesus, to act in his name and in his sight, as a shepherd of souls, is a step not to be taken lightly. Since the priest offers the Holy Sacrifice every day, sacrifice must also be the condition of his life. In giving Christ’s Body and Blood, we must also give our body and blood for the life of our people. 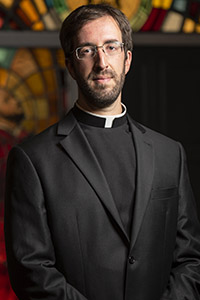 And so, we thank God for Julio’s “yes” given to God so generously and uncompromisingly today. Just as we pray for him today, we must continue to pray for him and all our priests. By the “laying on of hands” in this sacred rite of Holy Orders, Julio Minsal-Ruiz is configured to Christ the eternal High Priest and, joined to the priesthood of the bishops, he is consecrated as a true priest of the New Testament and shares in the very mission of Christ — sowing the seed of his Word, dispensing his Divine Mercy in the Sacrament of Penance, and nourishing the faithful at the table of His Body and Blood. 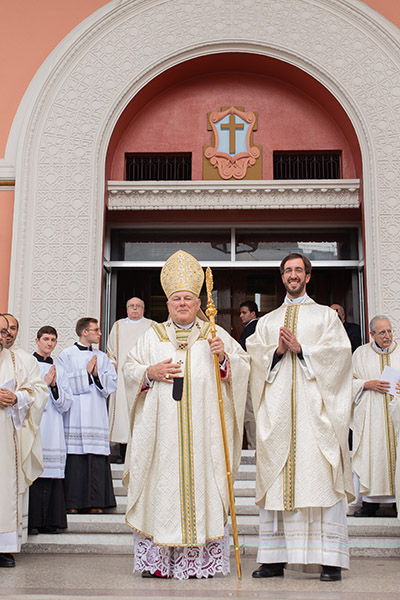 Through his pastoral ministry and his daily celebration of the Eucharist, Julio is to help the people entrusted to his care to come to the fullness of life in Christ; by healing hearts broken by sin and despair, he will help make God’s people “witnesses to hope.” Our world, increasingly organized as if God does not matter, desperately needs such witnesses. And the world desperately needs the priest’s witness that God in fact does matter. This witness is made more compelling by his detachment from material comforts and signs of status, by his readiness to obediently be available wherever his superiors may send him, and by his chaste celibacy which is the source of spiritual fecundity. The celibacy which is freely embraced by the priest, or the consecrated religious, affirms and proclaims that all human intimacy finds its deepest meaning and fulfillment when experienced as a participation in intimacy with God himself. Understood in this way, celibacy in no way contradicts the dignity of marriage but presupposes and confirms it. (cf. Familaris Consortio, 16). Celibacy, to be sure, is not easy; but then again neither is Christian marriage easy, for both require the gift of oneself in imitation of Christ’s own gift of himself on the Cross.

A priest, Pope Francis tells us, is not to build walls but bridges. And he has challenged all of us to “get out of the sacristies” and go out to the ‘outskirts’ “where people of faith are most exposed to the onslaught of those who want to tear down their faith.” Pope Francis reminds us that the priestly anointing we receive is not meant to just make us fragrant; rather, it is meant “for the poor, the prisoners, the sick, for those sorrowing and alone.” This is what Pope Francis would call being a priest who goes out of himself and lives like a shepherd with the “odor of the sheep.”

The demands of the ministry, with its inevitable trials and disappointments, and the fact that we carry the “treasure” of the Gospel in “earthen vessels” can sometimes tempt us priests to give into discouragement — and, perhaps, sometimes even to try the patience of our people. Priests, of course, forgive sins in the name of Christ and his Church. I ask you, Julio, to be generous with your time making yourself readily available to hear the confessions of the people. At the same time, I encourage you and the other priests here this morning that you do not neglect to avail yourselves of the consolations of the Sacrament of Penance. The Mercy of God is always greater than their — or our own — weakness and unworthiness.

No one wants you to burn out — a candle that burns out leaves a sooty mess. A burned-out priest is a mess too. But you are expected to work hard: you are not to burn out, but you are supposed to burn yourself up, to consume yourself in the service of Christ and his Church.

St. John Paul II in writing of people’s high expectations of their priests said: “...in the end they have but one expectation: they are thirsty for Christ. Everything else – their economic, social and political needs – can be met by any number of other people. From the priest they ask for Christ! And from him they have the right to receive Christ.”

Julio, may you be a true pastor of souls – as Jesus tells Peter in the Gospel of today’s Mass: feed the sheep... don’t feed off the sheep.