Deacon Julio Minsal-Ruiz stands and answers the call, "Present" at the start of the ordination rite.

At the conclusion of the ordination rite, newly ordained Father Julio Minsal-Ruiz is congratulated by his fellow priests, from the Jesuit Antilles Province as well as the Archdiocese of Miami.

Newly ordained Jesuit Father Julio Minsal-Ruiz gives his first blessing to Archbishop Thomas Wenski at the end of the Mass.

Archbishop Thomas Wenski was the main celebrant and homilist at the Mass, which was concelebrated by Jesuit Father Javier Vidal, provincial of the Antilles, along with other Jesuits and priests from the archdiocese. 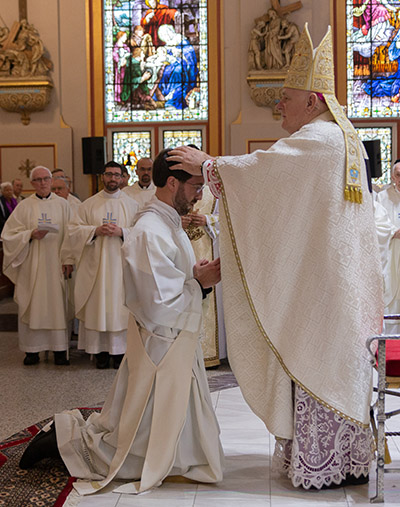 Father Minsal-Ruiz, 32, was born and raised in Miami and graduated from Belen in 2005. He graduated from Xavier University in 2009 with bachelor’s degrees in psychology and philosophy. Then he attended Fordham University, graduating in 2013 with a Master of Arts in philosophical resources. He entered the Society of Jesus in 2009 and began his formation as a Jesuit in the novitiate in Santiago, Dominican Republic.

“The call to serve others as a priest comes because of schools like this one which unites people across different subjects in a desire to live from this law of the gift,” said Father Minsal-Ruiz. “Community service, good sportsmanship, excellence in education, rootedness in faith are all virtues taught at Belen and they are all expressions of the law of the gift. All of these virtues I learned from the teachers, coaches, counselors, and priests who taught with their lives the mysterious power of this profound truth.”

Since August 2019, the new priest has been working as a theology teacher at his alma mater, where he will continue to work after ordination. He celebrated his first Mass Jan. 12 at his home parish, St. John Neumann in Miami.

The Society of Jesus is both a missionary and a teaching Roman Catholic religious order, founded by Pope Paul III at the request of St. Ignatius of Loyola in 1540. Since early on, the Jesuits have dedicated themselves to spreading the Gospel in mission lands and to the apostolate of education.

The Jesuits founded El Colegio de Belen in 1854 in Havana, Cuba.  In 1961, when Belen and all private schools were confiscated by the new political regime, the school was re-established in Miami and has grown over the last five decades. Currently, enrollment is nearly 1,400 male students in grades 6 to 12 and over 7,000 alumni.

Saturday, 11 Jan 2020
Sow the seed of his Word, dispense his Divine Mercy, nourish the faithful with his Body and Blood