Learning how to make a life, not just a living

Archbishop Thomas Wenski preached this homily Sept. 15, 2019 at St. Augustine Church and Catholic Student Center in Coral Gables, to mark the beginning of the academic year at the University of Miami.

Today, here at St. Augustine Student Center, at the beginning of a new academic year, we, too, start with prayer. Prayer is not the last recourse of the desperate – although one might get that impression around exam time; rather it is the prime resource of the hopeful. For prayer is the lifting up of our minds and hearts to God. Prayer, for a Christian, is not self-absorbed New Age navel gazing, rather it is the opening of ourselves to an encounter with the Infinite and Ever-Living God who has revealed himself in Jesus Christ, the Jesus who St. Paul says in this evening’s second reading “strengthens us” and in whom we have been “mercifully treated.” 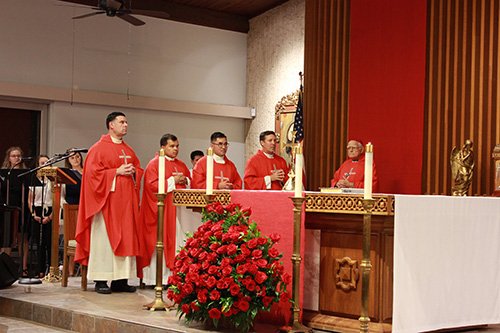 And so, “with the faith and love that are in Christ Jesus,” we invoke the Holy Spirit asking him that he fill your hearts with his love and your minds with his wisdom and thus bless and guide you in this new academic year.

If we don’t get that right, we could, like Hebrews in the first reading, lose our way and end up wandering in existential deserts. Lost in the desert, the Hebrews also lost their trust in God and turned to worship a golden calf that they made with their own hands. People today lose the way and they too fall into idol worship – the false “gods’ of our culture promise us pleasure, power, or plunder and, if we follow their allure, we will be lost. 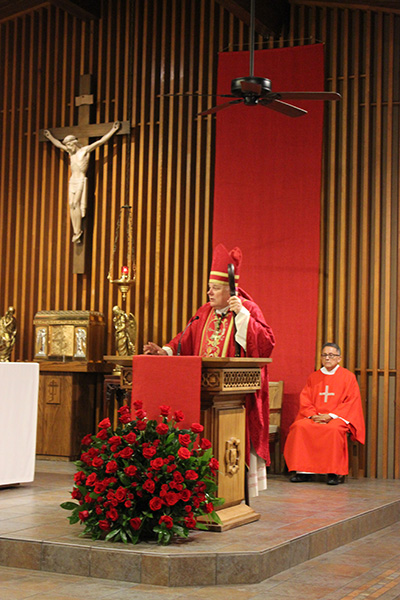 Archbishop Thomas Wenski preaches the homily during the Mass marking the opening of the academic year at the University of Miami. The Mass took place at St. Augustine Church and Catholic Student Center, just across from the UM campus, Sept. 15, 2019.

But, each of the Scripture readings today give us a message of good news: God is merciful. He does not punish the Hebrews but shows them mercy. And he does not just sit there waiting for us to beg his forgiveness. He, like the good shepherd, pursues the lost sheep; he, like the conscientious homemaker, sweeps under the table to find the lost coin; and he, the loving father, runs out down the road to embrace the lost son. He pursues us with passion until he finds us.

So, what does this mean for you – as you begin another year pursuing “higher education”? If higher education is not just about learning how to make a living but how to make a life – and I believe it is – then don’t get lost in the campus crowd; don’t hide from God; he is pursuing you – read Francis Thompson’s poem “The Hound of Heaven” – allow yourself to be found. 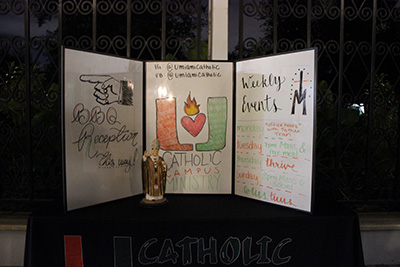 The wisdom that comes from revealed faith and the wisdom that comes from human learning are not necessarily incompatible – as is sometimes thought in this post-modern age in which we live. Often, we find those who feel that they must deny reason for the sake of their faith – faith for these people at best is reduced to the empty sentimentality of a Hallmark card; at worst, a facile justification for murderous ideologies invoked by those who would fly airplanes into skyscrapers. And just as often, we can find people – especially among the denizens of the ivied halls of academia – who feel that they must deny faith for the sake of reason – reason for these people is reduced to vain pedantry and conceited sophistry.

Such empty seductive philosophy is at the heart of the crisis of modern humanism which has lost faith not only in God but in human reason itself. It is expressed in the moral relativism that already has made great inroads into our popular culture – a relativism that holds that truth can be what we say it is and not what it is in itself. Abraham Lincoln offered a folksy retort to such moral relativism when he said:  If you call a tail a leg, how many legs does a cow have? Only four legs – because calling a tail a leg doesn’t make it one.

Pope Saint John Paul II said: “Faith and reason are like two wings on which the human spirit rises to the contemplation of truth; and God has placed in the human heart a desire to know the truth – in a word, to know himself– so that, by knowing and loving God, men and women may also come to the fullness of truth about themselves.”

As Catholics, we believe that truth is one. In that sense, there can be no real contradiction between belief and science, between faith and reason. The so-called “contradictions” that some would allege are only apparent ones that can be resolved through honest and reasonable inquiry. As Catholics we believe in both the value and power of faith and the value and power of reason.

For this reason, Catholic Campus Ministry should be part of your student experience here at the University of Miami. And I am very grateful to Father Richard Vigoa and Father Phillip Tran and all the staff here at St. Augustine’s. They are here for this university community – both students and faculty. They are here to assist you as you walk with the Lord. Here at St. Augustine Catholic Campus Ministry, we hope that your faith life can be well integrated with your academic life. Here, with the various opportunities Campus Ministry wishes to provide for both students and even faculty, you can experience a faith that is not just sentimentality but a faith that is reasonable – and because it is reasonable, a faith that commits you to search for truth, and to find the one who is the Way, the Truth and the Life.

“Come, Holy Spirit, fill the hearts of your faithful.” Guide us with your truth, with your wisdom during this academic year so that when we leave the U we will not only learn something about how to make a living but that we will know how to make a life. 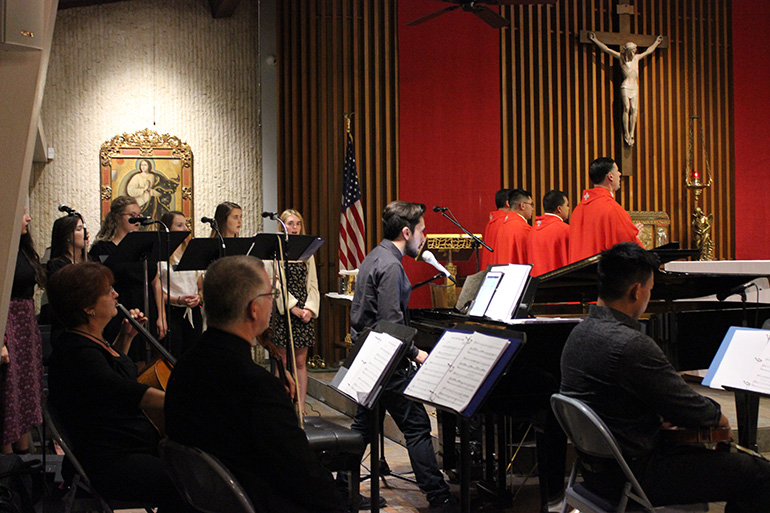 University of Miami students join musicians for the Mass marking the opening of the academic year at UM.