They join Paris bishop in urging prayers for firefighters, people of Paris 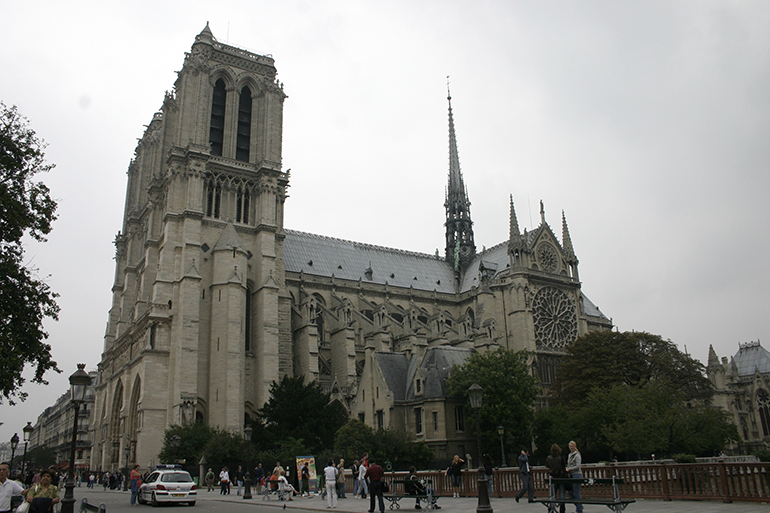 From staff and wire reports

MIAMI | As firefighters struggled to contain a massive fire at Notre Dame Cathedral, both the Vatican and the U.S. bishops issued statements assuring the people of Paris and all of France, especially those fighting the fire, of their prayers and support.

According to Catholic News Agency, Archbishop Michel Aupetit of Paris said that "firefighters are still fighting to save the towers of Notre-Dame de Paris. The frame, the roof and the boom are consumed."

"Pray," the archbishop told the priests of Paris. He also invited them to ring church bells as a public invitation to prayer.

Unconfirmed reports indicate that the major religious and artistic treasures of the cathedral were removed as the fire began, including a relic of the crown of thorns.

No announcement has yet been made concerning any injuries or fatalities resulting from the fire. Officials also have not yet determined what caused the fire, which is still burning. Both the fire department and the office of the public prosecutor in Paris have confirmed that investigations into the origin and cause of the fire have been opened.

Built between the twelfth through fourteenth centuries, the landmark cathedral in the French capital is one of the most recognizable churches in the world, receiving more than 12 million visitors each year.

The cathedral was undergoing some restorative work at the time the fire broke out, though it is unknown if the fire originated in the area of the work.

CNN quoted the Vatican as having released the following statement:

“The Holy See has learned with shock and sadness the news of the terrible fire that has devastated the Cathedral of Notre Dame de Paris, symbol of Christianity, in France and in the world. We express our closeness to the French Catholic and to the people of Paris. We pray for the fire fighters and for all those who are doing everything possible to face this dramatic situation.”

Cardinal Daniel DiNardo, archbishop of Galveston-Houston and president of the U.S.Conference of Catholic Bishops, issued this statement:

“The horrific fire that is engulfing the Cathedral of Notre-Dame de Paris is shocking and saddens us all, for this particular cathedral is not only a majestic Church, it is also a world treasure. Noble in architecture and art, it has long been a symbol of the transcendent human spirit as well as our longing for God. Our hearts go out to the Archbishop and the people of Paris, and we pray for all the people of France, entrusting all to the prayers and intercession of the Mother of God, especially the firefighters battling the fire. We are a people of hope and of the resurrection, and as devastating as this fire is, I know that the faith and love embodied by this magnificent Cathedral will grow stronger in the hearts of all Christians.”