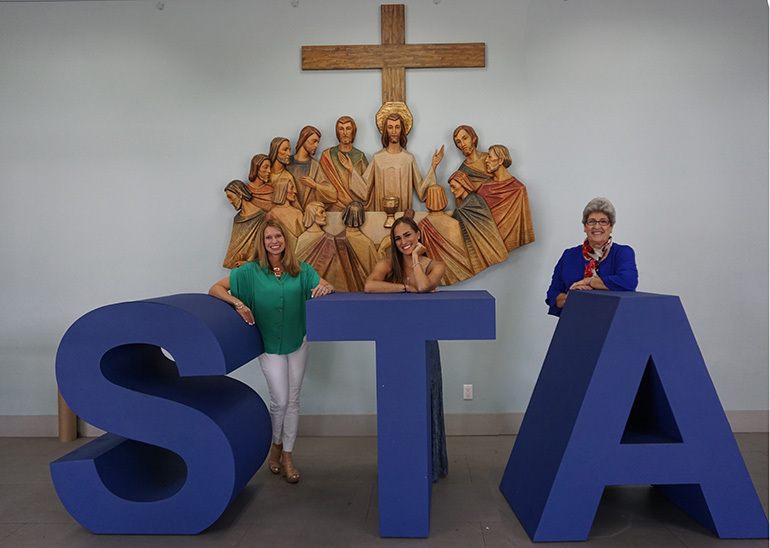 Women of STA: Principal Lisa Figueredo, alumnus Monica Puig, and teacher Nuria Baldor pose for a photo with St. Thomas the Apostle School initials. Puig, who is now an Olympic medalist and tennis pro, visited the school during the summer to highlight her early education and faith in a video for The Players' Tribune and Mass Mutual. 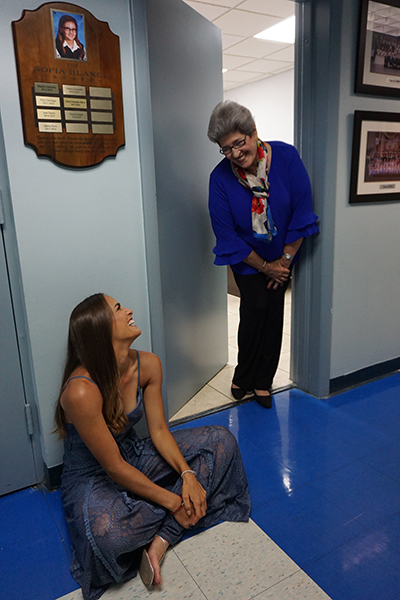 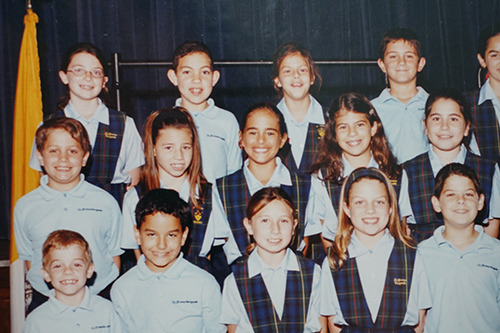 A class photo of Olympic gold medalist and tennis pro Monica Puig (second row, third student), when she was in the third grade at St. Thomas the Apostle School, Miami. 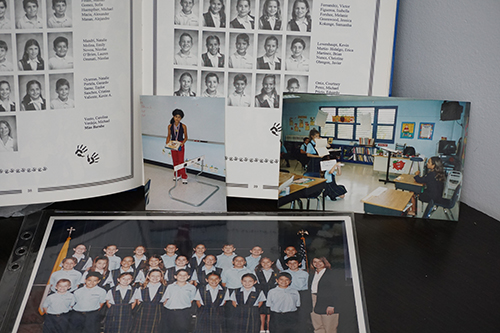 June 11, 2019 MIAMI School day memories of a future Olympic athlete: A yearbook photo, a class photo, and two photos show a young Monica Puig, now a tennis pro and Olympic gold medalist, during her time as a student at St. Thomas the Apostle School, in Miami. 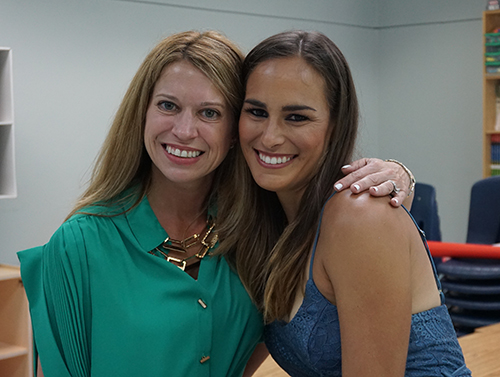 Back in third grade: St. Thomas the Apostle School Principal Lisa Figueredo and former student Monica Puig pose together in the classroom in their old classroom. Before becoming principal, Figueredo was Puig's third grade teacher. 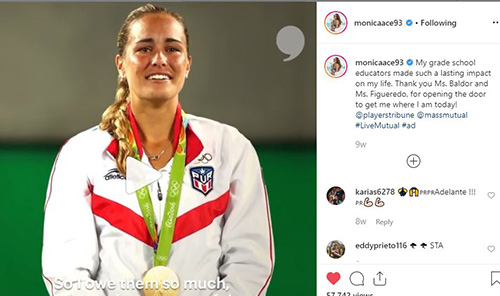 Monica Puig gave a shout-out to "my grade school educators" on her Instagram feed after winning an Olympic gold medal in tennis, the first for her home country, Puerto Rico, at the 2016 Olympics.

MIAMI | In 2018, during a visit to her Miami home, Puerto Rican Olympic gold medalist and tennis pro Monica Puig stopped by St. Thomas the Apostle Church with her mother to visit the Blessed Sacrament. It is a tradition the family upholds before any trip or after being away for a long time. Exiting the chapel, Puig had a strong desire to go next door and visit her old school.

“I walked right in to see if any of my old teachers were here and stumbled upon my two favorites,” said Puig.

The teachers were Nuria Baldor, St. Thomas the Apostle’s former principal, now a kindergarten teacher, and Lisa Figueredo, Puig’s third grade teacher, who is now principal at the school.

“Monica was always the bubbly, excited, little girl who was determined and succeeded and is accomplished now,” said Figueredo.

“It’s a very humbling experience to be here now, on the other side. To see the little girl become a woman of her own and be a very accomplished person that followed her dream,” said Baldor.

This summer, Puig returned to the school with The Players’ Tribune, a media platform specializing in sports conversations and first-person stories from professional athletes, to film a mini documentary honoring her education and faith. Baldor and Figueredo were also featured in the video. The Florida Catholic and digital media team of the archdiocesan Office of Communications also were present to capture an interview for YouTube.

While visiting the campus this summer, Puig’s must-see places included the hallway outside Baldor’s office, where she often sat, read, did her homework, and conversed with Baldor in the early morning hours before school started.

“She would be here quarter to seven, sit down, and wait for Mrs. Baldor. They opened the school together every single day,” said Marchan.

Another memorable spot was Figueredo’s third grade classroom on the school’s second floor. Puig remembers sitting in, learning, and interacting with other students, and “feeling like part of something big in this community, which was growing in the Catholic faith,” she said.

“You knew it was going to be a good school year when the teacher brought out the markers and the crayons because that meant that there was coloring, crafts and stuff to do,” said Puig.

Her favorite subjects in school were English and math. She admits that she was not particularly good at math but enjoyed the challenge and her father’s tutoring.

Puig began playing tennis at the age of six. During her time at St. Thomas, her schedule shifted to accommodate training and tournaments. While it did not affect her academic performance, by the time Puig reached the fifth grade, a decision about school needed to be made. For the sake of her continued growth in the sport, Puig switched to homeschooling. Former principal Baldor helped the family make the decision, reminding them that the doors at St. Thomas the Apostle School would remain open should she need to return.

At 25, Puig is grateful for the Catholic education that continues to make a difference in her life. She also thanks her mom for helping her keep her faith, especially while traveling.

“Always having God on my side, and believing in God, and praying and just maintaining the faith that he has a plan for me — something bigger than I expect for myself — that has obviously kept me very strong throughout the years,” said Puig.

She said she still cannot believe her gold medal blessing, the only one in the history of Puerto Rico, and the ninth medal overall in the island’s history. “It was the most amazing day of my life,” Puig said.

With the 2020 Summer Olympics in Tokyo less than a year away, she added, there’s definitely a lot of pressure to repeat. “But I’m just glad I was able to have that one experience and if it happens again in Tokyo next year, well, that will be quite a story to tell.”