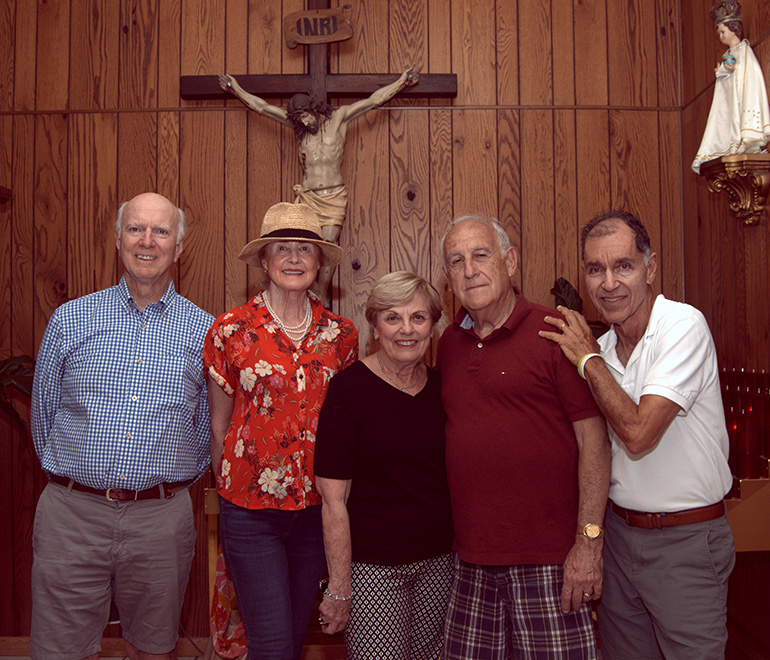 Alumni of Sts. Peter and Paul School revisit the parent church in Miami during their 70th anniversary reunion. They're standing in the chapel, where the church's original crucifix stands. From left are Joe Annis, Barbara Annis, Nancy Kelly Dodd, Dr. Serge Martinez and Paul George.

MIAMI | Whenever alumni of Sts. Peter and Paul School hear of 20th or 30th anniversary reunions, they just smile. In early April, they held their 70th.

Many of them became friends in first grade, just after World War II. They studied, danced, played ball, tossed water balloons, went to movies together — and kept in touch after graduation.

And when 25 of them gathered April 6-8, they laughed and chattered as if it all happened yesterday.

“The years separate us, but when we get together, it's like we've never been apart,” said Lucita Moran, who noshed with two dozen classmates a few blocks from the church and school they attended. “We're family to each other.”

Events started with lunch at El Pub, a favorite restaurant on Calle Ocho. Then a dozen alumni crossed the street to another beloved spot, the Ball and Chain bar and music hall, which once echoed to talent like Count Basie and Billie Holiday.

Then, although it was a Saturday, five visited the church and school where they first bonded. That night, 40 people — classmates, friends and spouses — crowded into a classmate's home for chicken, flan and a group photo. They also read the names of deceased classmates. Finally, a dozen reviewed the weekend at Sunday breakfast.

The Sts. Peter and Paul classmates meet roughly every five years, plus smaller get-togethers in November and December. That’s when alumni form teams for football games they call the Turkey Bowl and the Santa Claus Bowl.

Men at the luncheon traded tales of band and baseball and basketball and the “powerhouse” Panthers football team. The women told of joining an informal club, the Dungaree Dolls. They enjoyed both sock hops and cotillions, where they learned to waltz, tango and cha-cha.

Nancy Kelly Dodd excelled at relay races and softball, where she played catcher. “I still have my medals,” she said with a smile. “And my Girl Scout badges.”

She also performed in Christmas plays as Santa's helper, with Paul George as Santa.

“Paul played Santa in every Christmas play,” Dr. Serge Martinez said. “He had the only voice that carried.”

Nor did the fun stop at the school gate. The former students told of “halcyon days” during the postwar years, as Martinez put it.

“No phones, no TV; we were always outside, riding bikes to everybody's house,” he said. “In ninth grade, there was a party every weekend, usually at a girl's house. And in the summer, every day was a beach day.

“We had no money problems, because nobody had any. But somehow we didn’t realize we didn’t have it. In the 1950s, there was no greater place to grow up than Miami.” 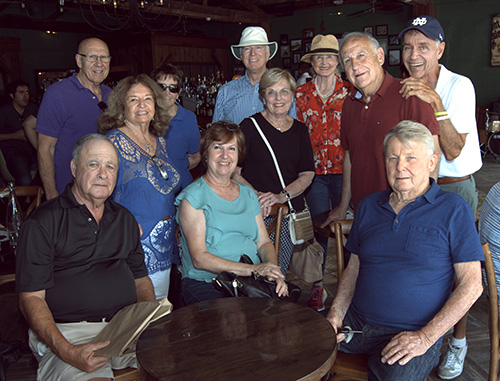 Alumni of Sts. Peter and Paul School visit a favorite bar and music hall during their 70th anniversary reunion.

But little money was needed for Saturdays at the neighborhood Tower Theatre, where a ticket and a hot dog cost only 25 cents. The theater offered cartoons, newsreels, features like “The Lone Ranger,” even yo-yo contests.

Another popular outing was a bus to downtown Miami. There awaited a Royal Castle restaurant, with 10-cent birch beer and 15-cent hamburgers. Boys browsed Burdine's or Jan the Magic Man, a magic shop. Girls shopped at Woolworths for supplies like barrettes.

“Many times we spent our bus fare and had to hitchhike home,” Fred Stebbins said. “It was safe then.”

“You hated to go to school,” Martinez said. “But once you were there, it was a lot of fun.”

But they had their “etiquette,” as Gary Graziani put it. He said the boys used only washable ink. And whenever they missed a basket on the school court, “Darn!” was their strongest language.

“We wouldn't cuss in front of the church,” Graziani said.

Friday nights often found them at the Big Wheel Drive-In, munching cheeseburgers — but only after midnight, in obedience to the Church's command (until 1966) not to eat meat on Fridays.

“We were good Catholics,” Moran said.

Catholic values were, in fact, interwoven in the lives of Sts. Peter and Paul students. Sometimes it was via the tough Sisters of St. Joseph, who blended teaching and ruler slaps to hands. Sometimes it was via serving as altar boys and walking in Mother's Day processions. And on the first Friday of each month, the whole school attended Mass at the church.

“I think most of us have stuck pretty close to the faith,” Stebbins said. “It instilled loyalty to our brothers. I can pick up a phone after 10 or 15 years, and feel comfortable talking to them.”

How have these 70-somethings hung together for decades, when graduates of other schools have drifted apart? The classmates mention three ingredients. 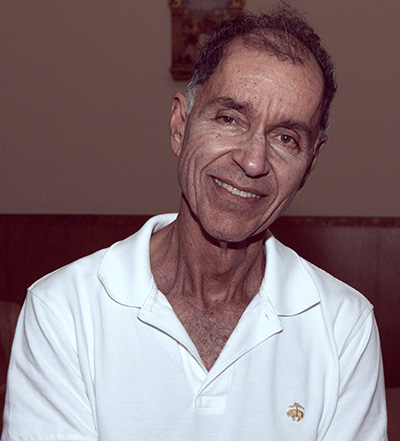 Paul George, resident historian at the HistoryMiami Museum, has organized reunions of Sts. Peter and Paul School for seven decades.

One was the close-knit neighborhood. The kids hung together, before and after school. And every mother knew every kid.

“We could always come inside, and they’d feed us,” Martinez said. “They always made sure we were safe and taken care of.”

And the mothers knew each other. In fifth grade, Nancy Kelly Dodd and a girlfriend wanted matching skirts for a dance. “My mom made them both, so we could look alike,” she said. “That's how the families were.”

Another factor was the local parochial school, which kept peer groups together — not only from class to class, but up through the grades. “From first grade on, you went to school with the same kids,” Graziani said.

Pretty much everyone named a third source: Paul George. Since he was 17, he has kept up calls, letters and mass e-mails with them all.

“His memory is amazing — he can tell what color someone's dress was at a party in 1964,” Stebbins said. “Paul is the one who kept everyone together.”

It helps that George is resident historian at the HistoryMiami Museum. But it's also that he never wanted the good times to end.

“The school, the football, the cheerleaders captivated me as a youth,” George said. “When we finished ninth grade, I said, ‘How could it be over? I can't leave this place behind yet.’ I wanted to keep the spark alive.”

Sts. Peter and Paul High closed in September 1956 as other Catholic schools opened. The students transferred to other high schools like Archbishop Curley and Immaculata, some of which have merged or phased out themselves.

But partly through George’s diligence, partly through their own affection, Sts. Peter and Paul alumni kept in touch through high school, college, careers and moves across the country. They still call each other to catch up or ask advice. And whenever any of them is in town, they know where they can stay.

Now that the group is in their later years — and at least a dozen classmates have already passed away — they’ve decided on reunions every two years instead of every five. But how many years can they keep doing this?

“It makes you think,” George admitted. “It makes us appreciate each other even more. And appreciate life in general. Because we realize how fast time has gone by.” 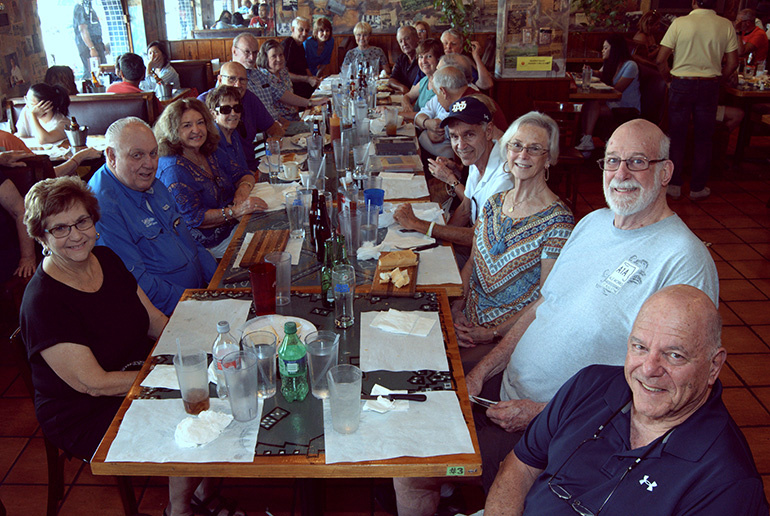 Alumni of Sts. Peter and Paul School gather for lunch in Miami during their 70th anniversary reunion.

Ramona BAUM Rung (former SISTER AGNES ANN) - 06/12/2019 01:51 PM
St.Peter and Paul's was my FIRST teaching assignment and I was a young NUN there from 1958-1960 teachingn second grade. I still have photos of some of those students. It was the yr Baptiste left CUBA and many of the children ended up in "My" class. They learned SOOOquickly--not just English, but, I stayed as long as I was allowed, in the classroon teaching them ore English words after dismissal. I will neve forget (and tears come to my eyes-how a boy named "Tommy" whose dad was a Doctor (at least in Cuba)said his parents said to show me his hands-filled with blisters-the result of my having them play "Wheelbarrow" on the pavement. (one child held the legs and the other raced on his hands being held OFF the ground. I was SOOO totally dumb about what to do at Phy Ed back then. But, I HAVE run into a few who were in my class and they remember the creative GOOD things-like putting tog a poem to learn how to spell the colors and another for the planets.Loved the sharing of your 70th.I went to my 60th from Bisphop Kenny in Jacksonville. You KNOW You ALL look GREAT!!!!Thanks again for sharing.

Dr. Carlos D. Coton - 06/11/2019 08:24 AM
Wonderful article. I went to Peter and Paul a few years after this illustrious group but indeed Paul George is the Elmers that keeps us together. The "throng" that gathers on Thanksgiving morning for the Turkey Bowl is impressive in the number of generations represented, and it is because of George's diligence. And....ah - the ruler slaps to the hand...50 years later, the tingling is still there. Carry on, Panthers!

Other News from Sts. Peter and Paul School