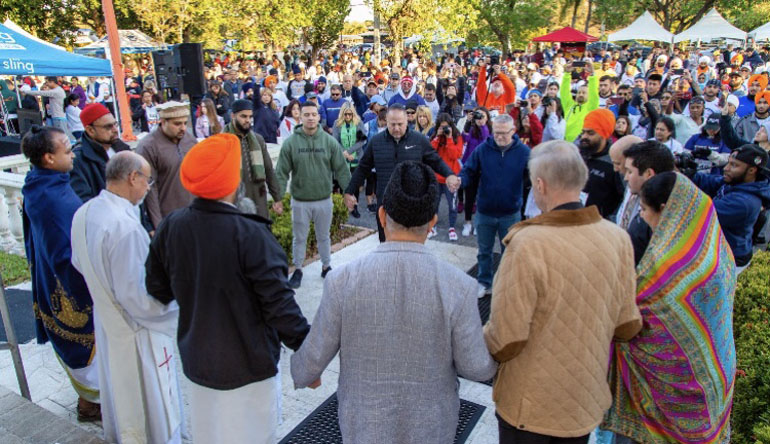 Leaders from various religious institutions in Southwest Ranches, including Archbishop McCarthy High, St. Mark Church and School, and the Archdiocese of Miami, take part in a unity prayer before the start of the 5K Run and Walk February 29. 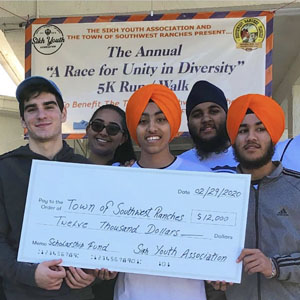 Various youth from the town of Southwest Ranches hold up the check they helped fundraise during the second annual "A Race for Unity in Diversity" 5K Run/Walk on February 29. Left to right is Nikolas Garcia, Muskan Singh, Pavitpaul Singh, Ramanpreet Singh, and Parneet Singh. The race brings together people of all ages, races, faiths, and cultures to raise money for college scholarships for youth from the town of Southwest Ranches.

Over 600 runners of various ages, faiths, and cultures gathered at the Sikh Gurudwara (temple) Feb. 28, 2020, dressed in sweatshirts, hoodies, and jackets to stay warm during the cool morning race.

Just before the start, various faith leaders gathered in a circle and joined hands in prayer. Among them: Father Patrick O’Neill, archdiocesan director of Ecumenical and Interfaith Relations, who came out to support the effort.

“The purpose of our race is to unite people from all different walks of life as a community. Through this platform, we seek to promote open-mindedness and community activism among our local youth,” said Guneet Moihdeen, president of the Sikh Youth Association and a junior at Mount Holyoke College in South Hadley, Massachusetts.

Nikolas Garcia, president of Sunshine Kids Club and a senior at Archbishop McCarthy High in Southwest Ranches, assisted in the executive production committee that organizes the race, as he did in 2019. This year, the team focused on increasing revenue and sponsorships, which tripled. 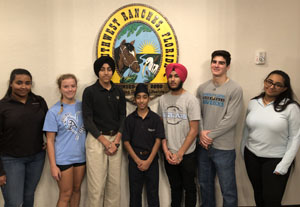 Three running and walking divisions allowed for children as young as five and under to participate, as well as kids ages 6 to 12, and 13 and older. One participant was even in her 80s, proof that age is no barrier to staying active, and more so for a good cause.

“Especially now with the way the world is, we need our youth's message of unity to resonate more than ever,” said Nikolas.

The town of Southwest Ranches is known for its “church row,” with numerous parishes, temples, synagogues and mosques located along Flamingo and Griffin roads. The annual race provides an opportunity for the various faiths and cultures to gather for a common cause that supports future college students from their own communities.

“The goal of this event is to further strengthen the sense of community by breaking down barriers and fostering helpful and cognizant interactions,” said Pavitpaul Makkar, community outreach director of the Sikh Youth Association and a junior at American Heritage School in Plantation. 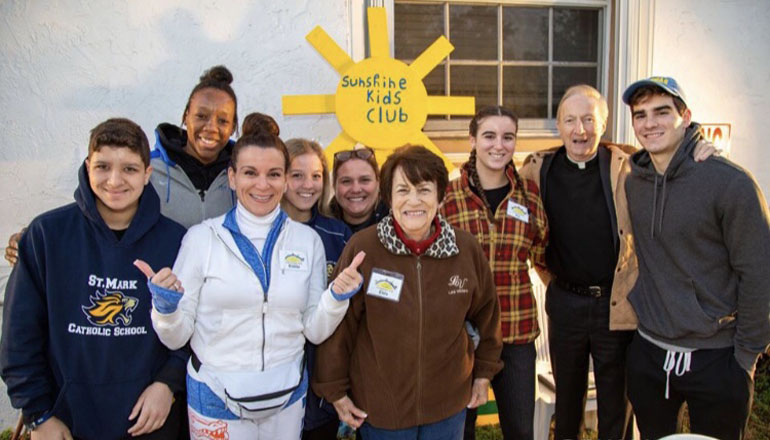 Members of the Sunshine Kids Club from Southwest Ranches pose for a photo, along with Father Patrick O'Neil archdiocesan director of Ecumenical and Interfaith Relations, who came out to support the effort.

Other News from Archbishop Edward A. McCarthy HS