Prayers for strength, healing rise along with good deeds in aftermath of tragedy 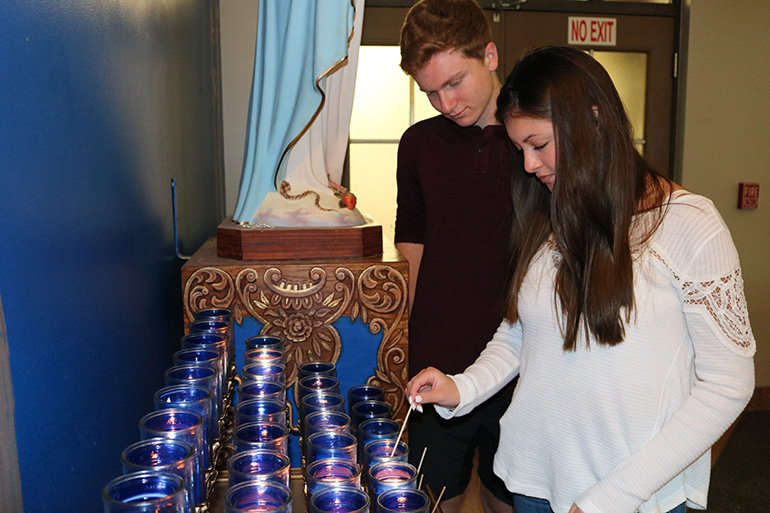 Alexa Reed, 16, and her cousin Joshua Reed, 18, light candles for the souls killed at Marjory Stonemman Douglas High School. They attended a holy hour at Mary Help of Christians in Parkland held to pray for the victims and the families and for peace.

PARKLAND | Although many plans had been made, no one was really looking forward to marking the one-year anniversary of the third deadliest school shooting in American history.

“This week is going to be a very difficult week,” Msgr. Terence Hogan told Mary Help of Christians parishioners at the end of Masses Feb. 10. Many in this Parkland parish continue to grieve for those killed in neighboring Marjory Stoneman Douglas High School.

“We are going to gather at 2 p.m., Feb. 14, the time of the shooting, for a moment of prayer and silence. It will be a quiet time for healing for families and a time to pray for the victims. It will also be a time to remember in prayer our first responders,” Msgr. Hogan told his congregation.

The one-year anniversary of the deadly shooting was marked statewide with flags flying at half-staff as schools across the Archdiocese of Miami, the state and the country remembered the three adults and 14 students who were killed Valentine’s Day 2018. Fifteen others were wounded. 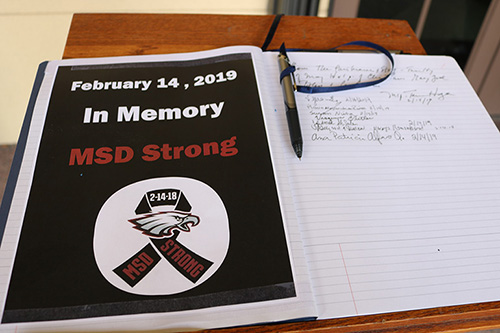 Guest attending a holy hour at Mary Help of Christians in Parkland sign a register before entering the church.

Therapy dogs are among the participants at a special holy hour held at Mary Help of Christians Church on the first anniversary of the Parkland school shooting, Feb. 14. The dogs from four different organizations were there to provide support for the grieving. 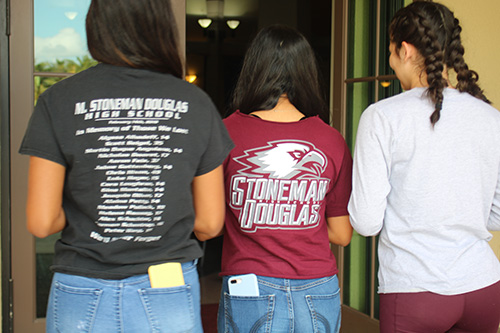 Valentina Zuniga, left, and her sister Gabriella, center, along with Camila Escobar, right, enter Mary Help of Christians in Parkland to pray for friends lost in the shooting at Marjory Stoneman Douglas High School Feb. 14, 2018. Mary Help of Christians held a holy hour on the first anniversary of the tragedy so that people could pray for the victims, their grieving families, and peace. 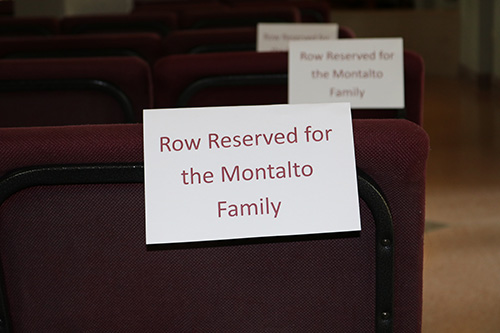 Seats at Mary Help of Christians bear the names of the Montalto family. Nearly 30 members of the family attended a holy hour at 2 p.m. Feb. 14, the one-year-anniversary of the Parkland school shooting where Gina Montalto, 14, was killed. She was in ninth grade at Marjory Stoneman Douglas High School.

A worshiper wears a T-shirt proclaiming the strong spirit of the Marjory Stoneman Douglas High School community, and Parkland at large, as they mark the first anniversary of the Valentine's Day shooting that killed 14 students and three teachers and staff. 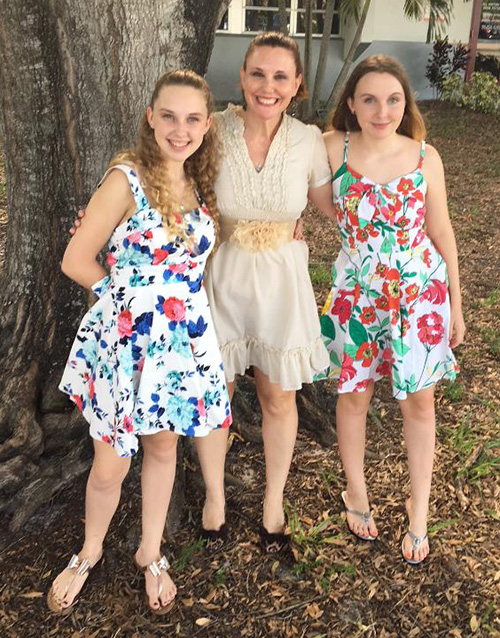 Mary Help of Christians parishioner Alison Carew poses with her twin daughters Madison, left, and Mackenzie. The girls are in 10th grade this year at Marjory Stoneman Douglas High School and are trying to move forward after the death of their classmates. 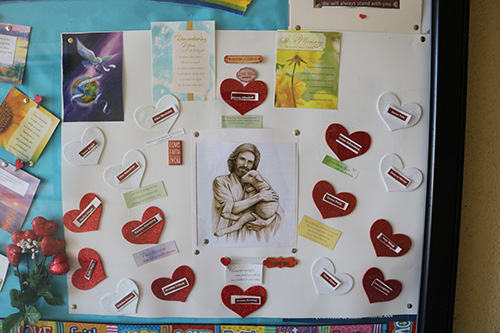 A poster board near the entrance of Mary Help of Christians Church bears the names of the victims killed in the Parkland school shooting. 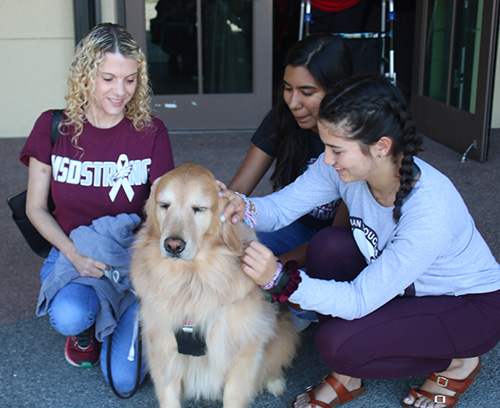 Holly Schneider, far right, a parishioner at Mary Help of Christians, attends a special hour of prayer for healing and peace Feb. 14 at her parish. Her therapy dog, Hammer, also attended and was there fto provide support to anyone who needed it. Shown petting Hammer are Valentina Zuniga, center, and Camila Escobar.

Students at Stoneman Douglas and other schools turned the day of tears and sadness into a day of service and love by participating in an array of activities and projects focused on performing good deeds and acts of kindness.

Mary Help of Christians School organized a Day of Remembrance prayer service Feb. 13 for the entire school community and invited guests, including Parkland Mayor Christine Hunschofsky and the parents and family of Gina Rose Montalto, 14, who had attended the parish school.

On the afternoon of Feb. 14, the parish opened its doors to anyone who wanted to spend an hour praying for healing, peace and, in Msgr. Hogan’s words, “the repose of the beautiful souls of our dearly departed.” Servants of the Pierced Hearts of Jesus and Mary provided a peaceful presence in the front row as music, scripture readings, a homily and silence provided a counterpoint of hope to the grief many people are still feeling.

At one point, parishioner Mae Groleau read the names of the deceased one-by-one. A bell tolled each time for the 17 souls. Tears flowed. Sobs were heard. Members of Montalto’s family filled three rows of pews in the church. A brick with her name, placed near the entrance of the church, was adorned with a red rose. Several children from the parish were at the high school that day and survived the attack but are scarred forever.

Following the holy hour, people gathered at Pine Trails Park for an interfaith prayer service. The park is where people went immediately after the shooting to erect a memorial to the deceased and support each other. The various religious leaders came together to assure those affected by the tragedy that God’s love would help them heal. Counselors and therapy dogs were also on hand for those in need.

Gino Scialdone, a parishioner of Mary Help of Christians, said over the past year “I have witnessed this community come together. It is the positive aspect of such a horrible event.”

Fellow parishioner Alison Carew, 43, recalled how she and her twin girls attended Mass last year on Feb. 14, Ash Wednesday, and received ashes symbolizing the briefness of earthly life and the promises of heaven. Then all three went off to begin their days, never imagining that the message in the form of a cross smudged on their foreheads would soon become more real.

Carew’s daughters, Madison and Mackenzie, are in 10th grade at Stoneman Douglas, their mother’s alma mater. She vividly recalls dropping her girls off at school that day and telling them, “It will be a beautiful day.”

“I knew that Ash Wednesday always leaves us feeling somber,” she explained, and wanted to part on a lighter note. She gave her girls a big hug and sent them on their way. “It turned out to be a tough day,” she said.

In fact, the day turned into a nightmare. A sense of terror swept over Carew as she began receiving text messages from her daughters around 2 p.m. When she read the words, “Mom, it’s a shooter,” her heart sank. At work in Boca Raton, she dropped everything, jumped into her car and headed toward the school. “There were lines of traffic, sirens blared, and emergency vehicles sped by,” she recalled.

The school was locked down, and the parents were told not to go there. Carew was desperate to get to her daughters, who were in separate areas of the school. Both had cellphones, but Mackenzie’s went dead. For hours, Carew experienced the terror of not knowing if Mackenzie was okay.

“I found out they were both safe,” she said. Five hours later, mother and daughters were reunited. “We were a complete wreck,” Carew said. “We didn’t know about Cara.”

Cara Loughran, 14, a parishioner of St. Elizabeth Ann Seton in Coral Springs, was one of the ninth graders who died that day. She was Madison’s close friend and Madison, 14, is taking her death very hard. She carries a photo of Cara with her at all times.

During Sunday Mass Feb. 10 at Mary Help of Christians, a Florida Catholic reporter saw her pull the photo from her purse and glance at it before putting it back. Nine of those who died were 14 or 15, the twins’ age, students with whom they shared classes, events and time.

Talking with the Florida Catholic, the girls were at a loss for words. Their mom said they are still shaken by the tragedy and the trauma they experienced, and both are seeing counselors. “It is devastating for them.”

A single mother with another daughter at Florida State University, Carew said she and her girls have turned to God for guidance as well. “The Church and faith have always been important to me,” she said. “Prayer is instrumental in our healing. It is a gradual process.”

The twins’ silence contrasts with the voices of other Stoneman Douglas students who have turned their grief into action, grabbing a hold of the spotlight to be a voice for change on behalf of those who died. In doing so, they are following the advice of their school’s namesake, an author, journalist and strong environmentalist who fought to protect Florida’s Everglades and is known for the saying: “You have to stand up for some things in the world.”

Their testimonies have reached every level of government, including the president. Stoneman Douglas students were instrumental in changing Florida law to raise the age at which people could legally purchase rifles. They and their parents have raised money to advocate for more sensible laws regarding the possession and sale of assault weapons like the ones used in the shooting.

Security and technology upgrades are taking place not only in Broward County Public Schools but across the state, including in Catholic and other private schools. Resource officers and mental health professional are now on campus at most public and even some private schools.

Alison Carew's daughter, Madison, is carrying out her own personal initiative away from the spotlight. She reached out to one of the students impacted by the Sandy Hook shooting in Newtown, Connecticut, Dec. 14, 2012. There, 20 children ages 6 to 7 died along with six adult staff members.

“They are pen pals,” said Madison’s mom. “They talk (about the constant shootings in the news) and don’t understand why things happen like this. They can comfort each other. That is comforting to me.” 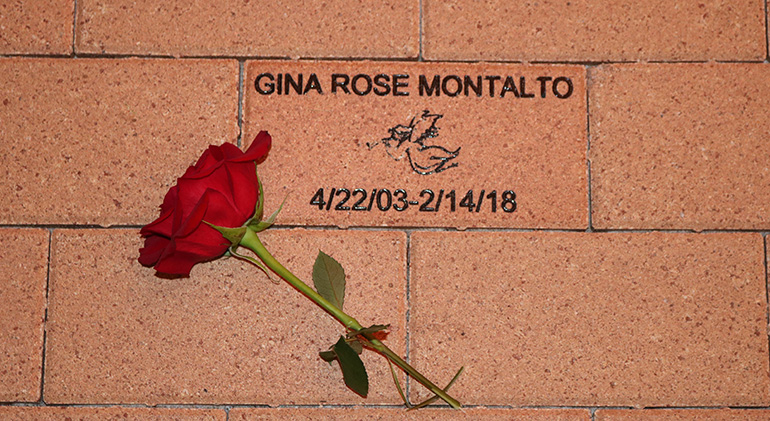 A red rose is placed on a brick near the Mary Help of Christians Church entrance in Parkland, bearing the name of Gina Rose Montalto. Gina, 14, whose family are parishioners, was killed in the shooting at Marjory Stoneman Douglas High School.