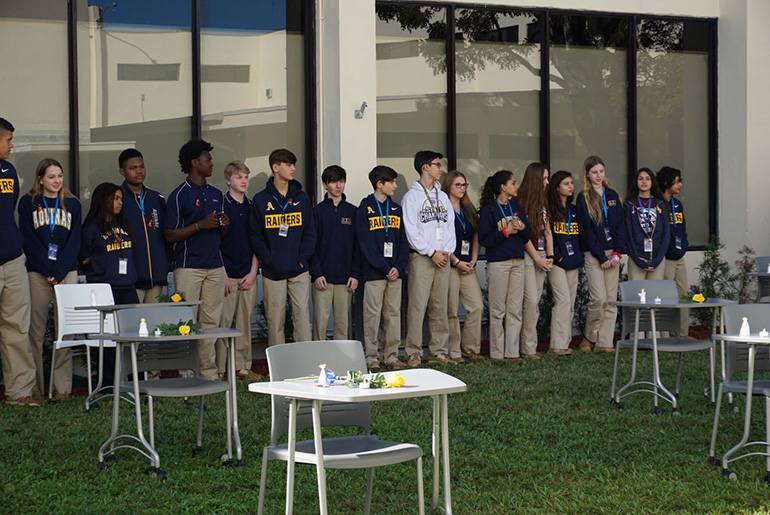 Students in a senior the theology class at St. Thomas Aquinas High School spend some time outside reflecting on the meaning of love, the people they love and how God loves them on Valentine's Day 2019, the first anniversary of the shooting at Marjory Stoneman Douglas High School in Parkland. The empty desks recall the 17 students and three faculty and staff who lost their lives on Valentine's Day 2018. 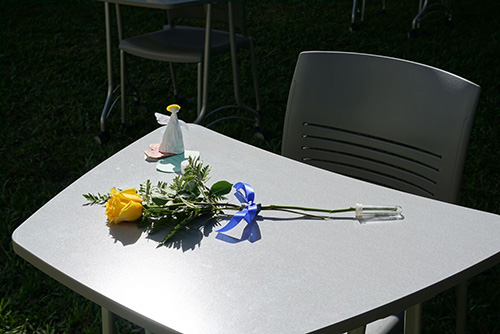 To mark the one-year anniversary of the shooting at Marjory Stoneman Douglas High School in Parkland, students at St. Thomas Aquinas High School in Fort Lauderdale set out 17 desks in one of the school's interior hallways, in memory of each of the victims. On the desks they placed a yellow flower, a candle and an angel. Throughout the day, classes would stop by and say a prayer, listen to a reflection or spend a moment in silence. 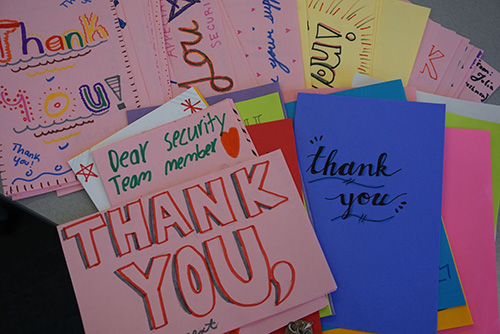 Students in St. Thomas Aquinas High School's theology classes created these cards to hand out to security team members at the school on Valentine's Day, the first anniversary of the shooting at Marjory Stoneman Douglas High School. 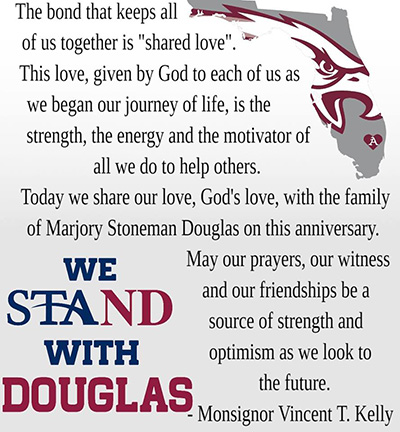 This is the prayer students at St. Thomas Aquinas High School recited on the anniversary of the shooting at Marjory Stoneman Douglas High School in Parkland.

The two schools often face each other at sporting events, and many Aquinas students have friends and neighbors who attend Stoneman Douglas.

To honor the memory of the lives lost, Aquinas students were allowed to wear Stoneman Douglas remembrance shirts if they had one. Orange ribbons were distributed in homeroom, representing the Parkland survivors' efforts to Stop Gun Violence. A special prayer was recited during morning announcements and in theology classes.

A moment of silence was observed at the same time as all of Broward County Public Schools, 10:17 a.m. Although the shooting did not happen at that time, the number honors the 17 who were lost and acknowledged the fact that students at Stoneman Douglas were only attending a half day of classes, in order to be able to attend memorials scheduled for the actual time of the shooting, between 2 and 3 p.m.

Aquinas also posted an "STA Remembers" banner, and perhaps most moving of all, placed 17 empty desks in an interior courtyard of the school. On each of the desks were a rose, a candle and an angel. Some of the theology classes went outside, where the desks were located, to pray and reflect on the meaning of love, the people they love, and the ways God loves them.

At St. Brendan High School in Miami students also remembered the Parkland tragedy. They prayed a Hail Mary for the victims as well as for an end to school violence Feb. 12 during the Campus Ministry evening with the freshmen and sophomore classes. They also prayed and remembered the victims during the school's BTV morning newscast Feb. 14; and they took part in a schoolwide moment of silence at 2:25 p.m., just before dismissal.