BOYNTON BEACH | Father Alfredo Hernández, a priest of the Diocese of Palm Beach, has been appointed to a six-year term as rector and president of St. Vincent de Paul Regional Seminary. He had been acting rector and president since July of 2020, when the previous rector, Father David Toups, departed after being named bishop of Beaumont, Texas. 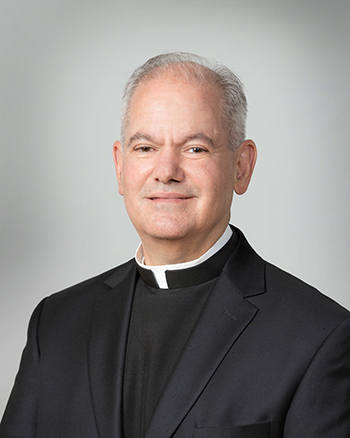 Father Alfredo Hernandez, ordained for the Diocese of Palm Beach in 1992, has been named rector and president of his alma mater, St. Vincent de Paul Regional Seminary in Boynton Beach.

Bishop Felipe J. Estévez of the Diocese of St. Augustine, outgoing chairman of the seminary's board of trustees, made the announcement Oct. 27, 2020.

Bishop John G. Noonan of the Diocese of Orlando, the board's incoming chairman, said, “It is a blessed moment in the history of SVDP when we have an alumnus being named rector. The Church in the southeast region celebrates today.”

Father Hernández grew up in West Palm Beach, where he attended Cardinal Newman High School. He earned bachelor's and graduate degrees from the University of Florida and entered St. Vincent de Paul Seminary in 1988. He was ordained a priest of the Diocese of Palm Beach in 1992.

He later earned a Licentiate of Sacred Theology in Systematic Theology from the Pontifical Gregorian University in Rome and a doctorate in Pastoral Studies from North-West University in South Africa. He served as pastor of St. Juliana Parish in West Palm Beach for 14 years and has served at the seminary in various capacities since 1997, most recently as academic dean and vice rector.

Father Hernández said he is grateful to the bishops of Florida. “I love this seminary and its mission, and we will continue to form priests who joyfully preach the Gospel to and lovingly serve our great diversity of parishioners.”

Since the seminary was founded in 1963, over 600 priests have been formed and gone on to serve in parishes throughout Florida, Georgia, the Carolinas, and a number of dioceses in the Caribbean and other parts of the U.S.

The seminary is a free-standing graduate/professional school of theology offering a Master of Arts in Philosophical Studies for Missionary Discipleship, primarily for pre-theologians as well as lay students; a Master of Divinity for priesthood candidates; and a Master of Arts in Theological Studies for permanent deacon candidates and interested laity. The seminary is also committed to providing continuing education for clergy, religious, and the lay faithful.