We have to believe that all souls are worth saving

Archbishop Wenski's homily during Mass at tomb of St. Peter 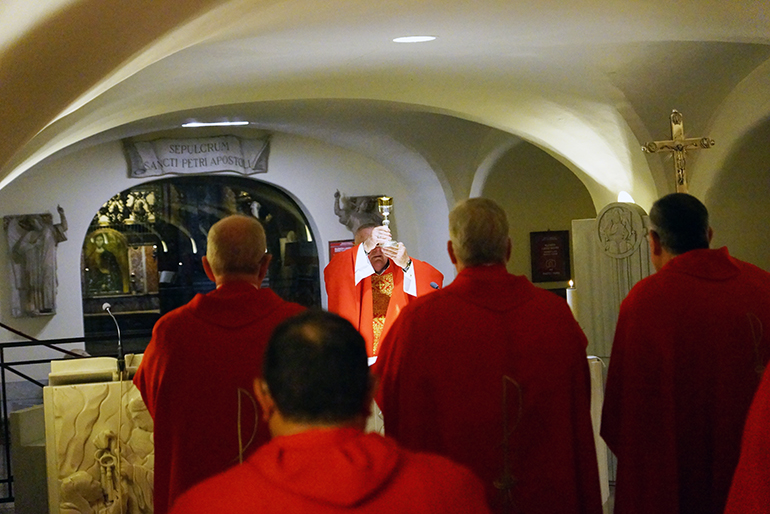 On Feb. 13, 2020, Archbishop Thomas Wenski was the main celebrant of the Mass at the tomb of St. Peter, in St. Peter's Basilica, along with the bishops and delegations from the other dioceses of Florida, Georgia, North and South Carolina.

Archbishop Thomas Wenski preached this homily while celebrating Mass Feb. 13, 2020, at the tomb of St. Peter in St. Peter’s Basilica, Vatican City. He was the main celebrant of the Mass with bishops and delegations from other dioceses in Florida, Georgia, North and South Carolina. Archbishop Wenski and the other bishops were in Rome for their ad limina visits, mandatory reports on the state of their dioceses.

Today, we come to the tomb of St. Peter. We remind ourselves that here, near where Peter was crucified, his body was laid to rest. This beautiful basilica is built on top of a grave — Peter’s grave and we pray for his successor, Pope Francis, that he too will continue to take care of the sheep entrusted to his care. Of course, since I am the Archbishop of Miami, I cannot resist reminding you that the question that Jesus asked Peter as he charged him to tend the sheep — after he had denied him three times — is, when translated into Italian, “Pietro, Miami?” (Peter, do you love me?)

We pray for Peter today — Pope Francis — and I would be so bold to ask the pilgrims that join us for Mass this morning to also pray for me and the other bishops here that we too will respond with Peter: Yes Lord, you know that we love you. May we love the Lord — and may we love the sheep he has entrusted to our care as the pastors of our local churches.

In the first reading, we hear how Solomon, despite his wisdom, allowed himself to be contaminated by the surrounding culture — falling into idol worship. For this reason, the Jews sought to “live apart” from the nations. And, for many of the Jews, to be chosen by God meant that people of other nations were inferior to them. We see this attitude, this prejudice, reflected many times in the Gospels. The apostles were shocked, for example, when Jesus talked to the Samaritan woman. The Pharisees held those who did not follow strictly all the dietary rules of the Jewish law in contempt. And in today’s Gospel when Jesus, to test the faith of this Syrophoenician woman, said: “It is not right to give to dogs the food of the children” he knew — as did she — that the Jews believed her and her people to be even worse than dogs. 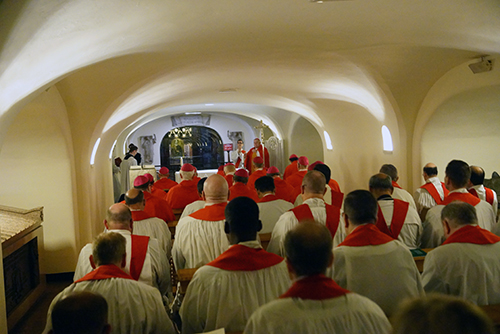 On Feb. 13, 2020, Archbishop Thomas Wenski was the main celebrant of the Mass at the tomb of St. Peter, in St. Peter's Basilica, along with the bishops and delegations from the other dioceses of Florida, Georgia, North and South Carolina.

In the short exchange between her and Jesus, the woman apparently bests Jesus in the discussion. “Even dogs can eat the crumbs,” she says. When Jesus argued with the Pharisees and the scribes, he made his points so powerfully that they had no “come-back,” no retorts. Not so with this pagan woman.

But it was not so much this “zinger” she came back with, but her faith that won Jesus’ favor.

As the Apostles would later learn — as they went forth preaching the good news to all the nations — every nation, indeed every person — no matter what their race, ethnic origin, class or nationality — every person can be fertile ground in which the Gospel can take root. If this Syrophoenician woman is to be considered a dog — let us say that she was a “lucky dog” — because she encountered the Lord and he showed her mercy by delivering her daughter.

Of course, as baptized Catholics, we are members of the New Israel, as the Apostles sometimes called the Church. We are also a “chosen people,” a people “set apart.” But again, having received this great gift — to call ourselves Christians and Catholics — is not something we should lord over others — as if this gives us the right to think of ourselves as better than others and therefore to look down with scorn on those who have not received this gift of belonging to the Church of Jesus Christ. There are “good people” who are not Christians — and there are bad people who are.

If we have received this gift it is so that we might also be a light to those who have not yet found Christ, a light that will lead them to Christ. We acknowledge our sinfulness but testify that his mercy is greater than our wickedness.

Today’s Scripture therefore calls us to overcome any prejudice or bias we might hold in our hearts to those outside of our “chosen circle” of friends and relations. As baptized Catholics we are to be disciples of Jesus — but we can’t keep Jesus to ourselves. We also are to be missionary disciples — willing to share him with others, especially with those who live, as Pope Francis reminds us, on the “periferias” — the poor, the abandoned, the migrant, the vulnerable. As Catholics we are called to preach the good news to all so that those that hear it might be saved. But to do that, we have to believe that their souls are indeed worth saving.

When I was in the seminary, a psychologist named Carl Rogers was quite popular. His brand of psychology was not without its confusions and he did mess up a congregation of nuns in California with his ideas back in the ‘70s. But even a stopped watch is right twice a day; he did say something that struck me of being of the greatest importance: he said that for any counseling relationship to be successful, the counselor must have “unconditional positive regard” for his clients. The client will sense it, if because of prejudice or for some other reason, you lack this “unconditional positive regard.” In other words, you got to love them.

And Jesus, in granting the Syrophoenician woman her request, showed her “unconditional positive regard” — something that the apostles also learned to do when in response to the Great Commission they began to preach the Gospel to the nations. They preached uncompromisingly but they preached with “unconditional positive regard.” Peter, Paul, Andrew — and the other apostles — died preaching the Gospel to save the pagans for Christ. They died — offering up their lives for Christ — because they believed those souls of those pagans were worth dying for.

This pagan woman — speaking for all those who are still outside the community of faith — in saying that even dogs can eat the crumbs that fall from their masters’ table, reminds us all, but especially us bishops, that her soul and the souls of those like her are worth saving.