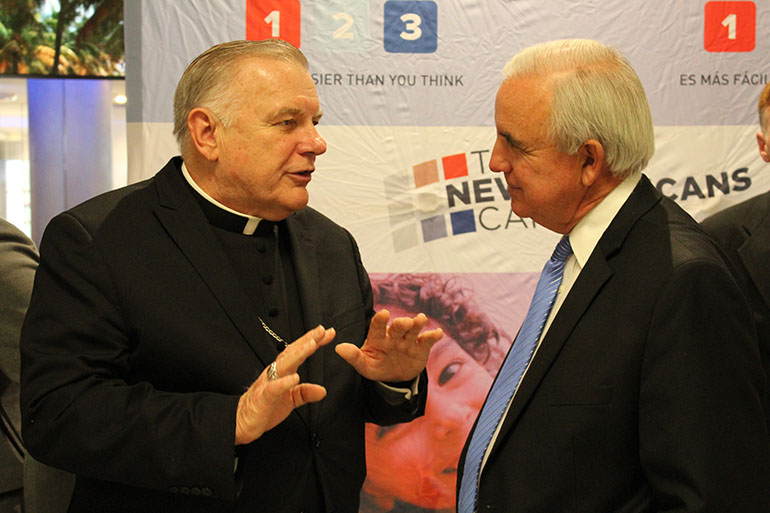 Archbishop Thomas Wenski gets in a few words with Miami-Dade County Mayor Carlos Gimenez during the press conference for the New Americans Campaign launch of Citizenship 1-2-3 in February 2016. Catholic Legal Services of the Archdiocese of Miami has been helping legal immigrants fill out citizenship applications as part of the campaign but the final step for hundreds of thousands - taking the oath of citizenship - has been put on hold by the coronavirus pandemic.

MIAMI | Imagine being denied a diploma because you couldn’t attend an in-person graduation.

You did the work. But the coronavirus pandemic prevented the ceremony from taking place. So you’re not officially a high school or college graduate until you walk across the stage to receive your diploma.

That’s what’s happening to more than 100,000 immigrants whose status as U.S. citizens is being delayed by the pandemic. U.S. Citizenship and Immigration Services closed its offices and ceased all in-person services March 18, 2020. That includes naturalization ceremonies where, on average, 63,000 new citizens take their oath each month.

Advocates for immigrants, including Archbishop Thomas Wenski, are asking the USCIS to permit virtual ceremonies so these new citizens can take their place in American society — including exercising the right to vote.

During a conference call with reporters May 28, 2020, the archbishop pointed out that these immigrants “have already passed their test” and only need to take the oath of citizenship.

The call was organized by America’s Voice, an organization that advocates for “common sense immigration reform.”

“Everything needed to secure their eligibility for citizenship has already been vetted,” the archbishop said. “What we’re asking is basically for an accommodation” to do the naturalization ceremony virtually, “something we’ve all become comfortable with” over the past two months. He cited virtual classes, virtual board meetings and even “virtual worship.”

“Many of these people that are applying for citizenship are among the heroes that we celebrate,” Archbishop Wenski noted. He cited a Department of Homeland Security analysis of 2018 Census data showing that immigrants comprise 16% of all healthcare workers in the United States, and 33% of health care sector workers in New York state.

“These oath ceremonies are formalities,” agreed Eric Cohen, executive director of the Immigrant Legal Resource Center, who was among the experts on the conference call. His organization launched the New Americans Campaign, which has helped nearly 500,000 immigrants complete their naturalization applications. The Archdiocese of Miami’s Catholic Legal Services is one of the campaign’s 200 partners nationwide.

The inability to hold an in-person ceremony should not be “justification for withholding citizenship to so many new Americans,” Cohen said. “Many of the people who are impacted by this process have waited their entire lives for this opportunity.”

USCIS announced at the end of May that it will begin re-opening its offices to the public “on or after June 4.” That will include holding smaller, in-person naturalization ceremonies that comply with social distancing and other public health guidelines issued by the Centers for Disease Control.

But Cohen said those ceremonies are “not nearly enough” to deal with the backlog, and “even the small ceremony is going to be hard for the elderly, for people with health problems” to attend.

The agency maintains that it is barred by “legal and operational obstacles” from holding virtual ceremonies, said Ur Jaddou, director of DHS Watch with America’s Voice and former USCIS chief counsel, who moderated the conference call. But she disagrees.

“I’m quite confident that the law allows for virtual oaths during this pandemic,” she said. In fact, USCIS has to “permit virtual oaths” to live up to its congressional mandate.

“There is ample room in the statutes, in the regulations, in the policies for them to do this. They do have a requirement to hold naturalization oaths and get people through the process,” Jaddou said.“With each passing day the number grows.”

The Heroes Act, which recently passed the House of Representatives, would specifically allow for virtual naturalization ceremonies. But the legislation is stalled in the Senate.

That leaves people like Carsten Keiffer in limbo. A green card holder and lieutenant/paramedic with the Tavares, Florida, fire department, Keiffer immigrated from Denmark in 2007 and was scheduled for a citizenship interview April 1, “with a possible oath taking on April 2.” He received a cancellation notice by email March 17.

“My green card expires on June 30,” he said during the conference call. Should he pay again to renew it? “Where do I stand?”

Carlos Curbelo, a Republican and former U.S. Representative for Florida’s 26th District, also took part in the call. He said these new citizens, all legal immigrants, “have been working, they have been contributing, they have been paying taxes. They have earned a voice in our democracy.”

Archbishop Wenski stressed that granting these new citizens the right to vote should not be a partisan issue because immigrants “fall on both sides of the ideological divide.”

Among them, he noted, are 4,600 Cubans, 1,100 Venezuelans, plus a number of Haitians, Nicaraguans, Colombians and others who live in South Florida.

“This is a bipartisan issue. No party should see that giving citizenship to these immigrants would provide an advantage to one party or another,” the archbishop said. “It’s a win-win for them and for America to allow them to become citizens.”

Valli Leone - 06/04/2020 11:57 AM
Yes! We open the doors of our hearts and our country to these wonderful new Americans. May we make every effort to be sure that there citizenship is finalized. Lord Jesus Christ, you are a way maker, a miracle worker, a promise keeper and a light in the darkness! Thank you in advance for the wonderful celebrations and contributions to our country that will be made in light of these events.Alleluia! âï¸âï¸ð

Gustavo - 05/30/2020 11:24 PM
This is a bipartisan issue. No party should see that giving citizenship to these immigrants would provide an advantage to one party or another," the archbishop said. "It's a win-win for them and for America to allow them to become citizens." No, it is not. It's why "the Party of Death" the Marxist Democrats want open borders. If you need any evidence, look at Miami-Dade and Broward counties were most of the population voted overwhelmingly for the Marxist Democrats. The exceptions are the Cuban and Venezuelan communities. The Church has viscously condemned marxism and Communism before this disastrous Pontificate. The Church should concentrate on catechising the faithful.