Burning issues: The deed is done 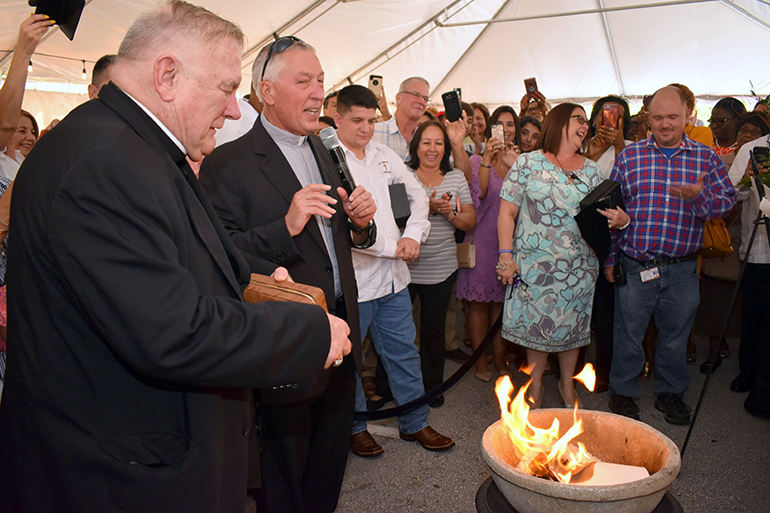 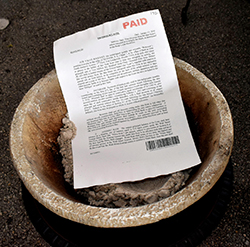 Paid-off mortgage is ready for burning at St. Edward Church.

Triumphal bracelets were passed out May 18 after a mortgage-burning celebration at St. Edward Church.

PEMBROKE PINES | Fire ended Mass at St. Edward Church on May 18 — a fire set by Archbishop Thomas Wenski himself — yet everyone cheered. It was a mortgage-burning celebration for the church’s main building.

The Mass, ceremony and dinner capped a seven-year campaign — a flamboyant project that included costumes, a dance, T-shirts, a yard sale and other flourishes. The efforts helped the church’s 2,800 families pay off a debt upwards of $2.66 million.

Archbishop Wenski, who also served as the Mass’ main celebrant, congratulated the parish with one of his signature quips.

“Paying a debt is the lifting of a great burden — hopefully, you’ve also been able to do so with your cars and houses,” he said, to laughs from the 750 at the Mass.

Mass started with a multiracial choir singing jubilant praise and worship classics like “The Power of Your Love” and “Be Exalted, O God.” Backing the singers was a rhythm section of guitars, bass, keyboard and drums.

In his homily, the archbishop congratulated the congregation on its achievement. “It’s a great feeling not to have any debt,” he said. “But our faith is not just about feelings; it is about commitment, about discipleship; it is about doing. And there’s a lot to do here at St. Edward’s.

“So celebrate the moment — but it might not last long,” he added, to laughter. 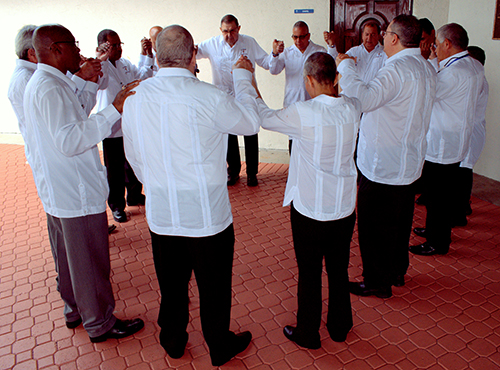 Choir sings praise and worship songs for Mass before a mortgage-burning celebration at St. Edward Church.

After Mass, the congregants gathered under a big white tent in front of the church building. There, in a sand-filled stone bowl, lay the mortgage, with “PAID” stamped in red.

“We’re going to need something to light it with,” Father Peloso said, whipping out a leather case of eight Cuban cigars and handing it to Archbishop Wenski.

He held out the document for the archbishop to light; then he hastily dropped it into the bowl as it caught fire quickly. Then the archbishop led singing, first in Spanish, then in Creole, and finally in English.

People then lined up for a catered Italian buffet of pastas, salads, veal and seafoods. Dessert included slices of a cake with “The Deed Is Done” scrawled on the icing. Some people looked over a table with various memorabilia, like a shovel from the groundbreaking in 1998.

Spearheading the fundraising campaign was a Stewardship Committee of a dozen members who made commitments of three years at a time. But Father Peloso was quick to credit the congregation as well — which runs 44 ministries, including men’s, women’s and youth groups, food distribution, rosary groups, greeters, ushers, “Life in the Spirit” retreats and small groups called parish evangelizing cells.

“People are active — they want to be here,” Father Peloso said. “Mothers even tell me their sons love to hear the homilies.”

The main fundraising event was a masquerade ball in November 2016. Even the promotion for the event was flashy, with members of the Stewardship Committee dancing in the church aisles in suits and evening gowns. 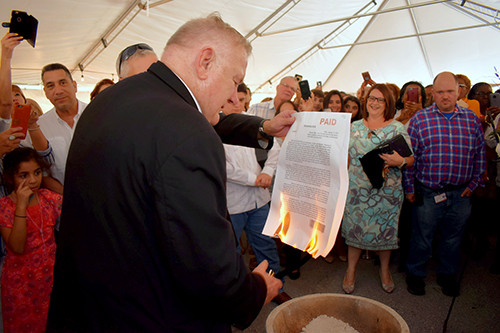 The committee had another surprise for those who attended the ball. Johnny Goris disguised himself as Father Peloso, while the priest dressed as Captain America. When the real Father Peloso unmasked himself, “Everyone went ‘Ohhhhh,’” Goris said with a grin. “Some people had been talking to me all night like I was Father John.”

Nor was that event the only card the committee played. The campaign also included: 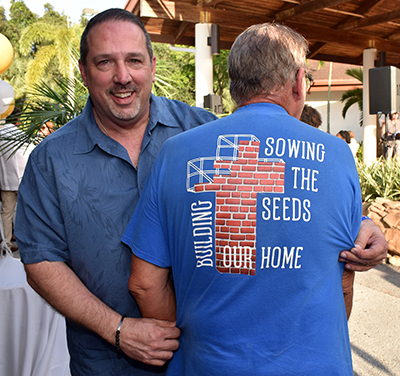 William Shashaty shows off a fundraising campaign T-shirt at St. Edward Church. The church held a mortgage-burning celebration May 18. 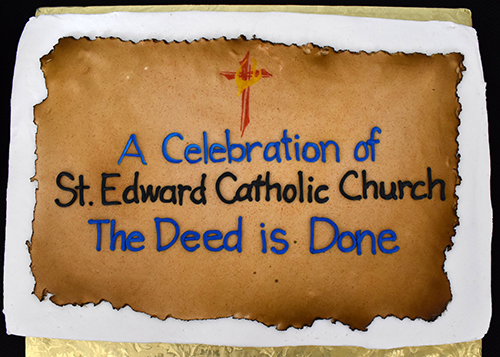 Cake bears a campaign slogan for St. Edward Church, which recently paid off its mortgage.

Finally, at the mortgage burning, they passed out rubber wristbands marked “The Deed Is Done.”

All the stunts had a serious aim, Paonessa said. “Week after week, month after month, we drilled the message, ‘We’re family.’ The goal was to make everyone feel involved.”

The Stewardship Committee members themselves bonded as they worked together, Shashaty said. “Before we started, we didn’t know each other. Then we became friends.”

Those friends included Ed Kolo, a leader of the annual Man Up men’s conference and a member at St. Edward’s for 11 years.

“The archbishop said this church is a family, and it really is,” he said. “Everyone comes for the same purpose: to serve the Lord and to practice their faith.”

Goris agreed. “I can’t imagine going anywhere else. These people are giving and loving. They make you feel at home.”

That family atmosphere was a big draw for Guy and Elizabeth Brickman, who chose St. Edward after shopping among 14 churches. Guy even created a spreadsheet, measuring the churches against a dozen criteria, like music, the homily and an “engaged community.”

Five years ago, they attended three parishes on Easter weekend: Vigil Mass the previous night, then two morning Masses. When they got to St. Edward, Guy told his wife: “This is it.”

For Elizabeth, the difference was the spirited worship, similar to the Catholic charismatic meetings she’d attended. For Guy, it was the strong emotional bonds he saw among the members.

“All the people together make one person,” said Guy, a member of the church’s financial council.

That “person” will still face more challenges, Archbishop Wenski cautioned. “Don’t think that going forth, you can give any less. Actually, after all these years, I think, you need a new church and some space for some more activities.”

Joe Rogers, a parishioner since 1995 — the year St. Edward’s was founded — echoed the archbishop’s view. Both the 11 a.m. English Mass and the 1 p.m. Spanish-language Mass are packed.

“It’s nice to get that debt behind us, but we have to get to the next big thing,” said Rogers, another member of the financial council. “We’ve outgrown this place.” 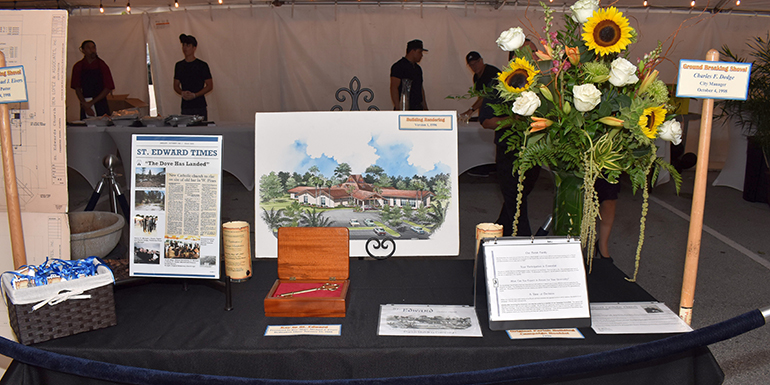 St. Edward Church memorabilia were displayed May 18 after its mortgage-burning celebration.

Other News from St. Edward Church