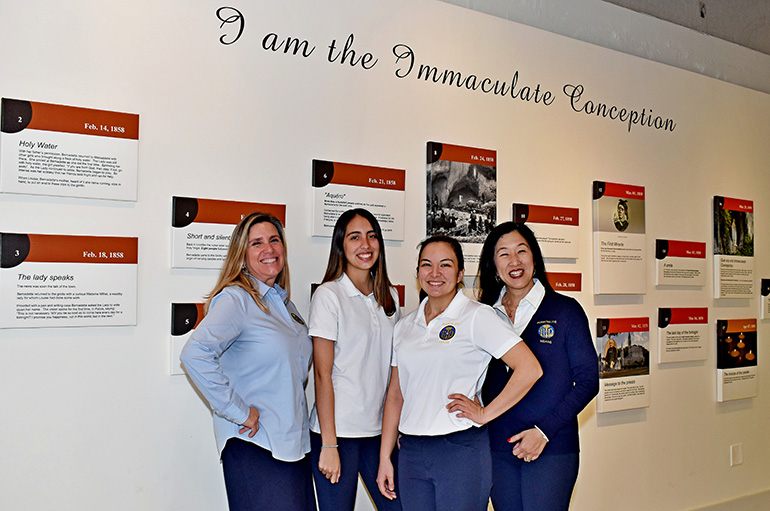 Members of Hospitalité de Miami gather at the timeline wall at Our Lady of Lourdes Church in Miami. From left are Cristina Fernandez, Daniella Perez, Gabriella Rodriguez and Michelle Rodriguez.

MIAMI | Millions of people flock to the Marian shrine at Lourdes, France. Daniella Perez didn’t want to be one of them — she went only because her family made her. 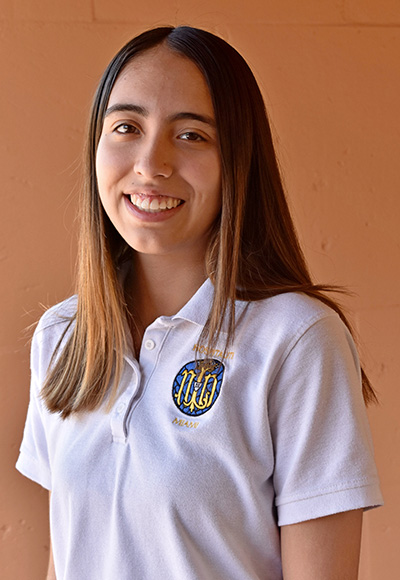 Daniella Perez said she felt the love of Mary pouring from a statuette at Lourdes, France.

The 17-year-old wasn't even a believer, she confessed. "I only pretended to pray. I questioned everything the priests said. I didn’t believe anything."

What changed her mind was a miracle, she said.

At Lourdes, she was assigned to assist an eight-year-old stroke victim. Daniella wheeled the girl to the main grotto — and was amazed to see "a glow in her eyes" as she pointed at the statue of Mary there.

"I looked, too, and I saw the same glow in Mary's eyes," recalled Perez, a member of Our Lady of Lourdes Church. "It was the Blessed Mother embracing us together."

Now 21, she joins other volunteers at Our Lady of Lourdes Church in annual pilgrimages to Lourdes, France, praying, singing and assisting others who seek miracles.

Known as Hospitalité de Miami, the 200-member group serves the healing ministry born at the fountain in France where a peasant girl reported visions and messages from Mary. The Miami group organizes semiannual tours to the site to bring the sick and suffering.

The volunteers book hotel rooms and work as guides for the various segments: walking the footsteps of St. Bernadette, visiting the grotto where she saw Mary in the 1800s, washing in the spring waters there, and taking part in the eucharistic and candlelight processions. They also carry the infirm to a pool at the site, lowering them into the waters in the hope of healing.

About six million people visit Lourdes every year, asking for healing for themselves or for those they assist. Seventy cures have been verified by the Church, with another 7,000 claims of healings.

The Miami parish's involvement began with five members visiting in 2012. Msgr. Kenneth Schwanger, who became pastor a decade ago, was among the main drivers of the trip. 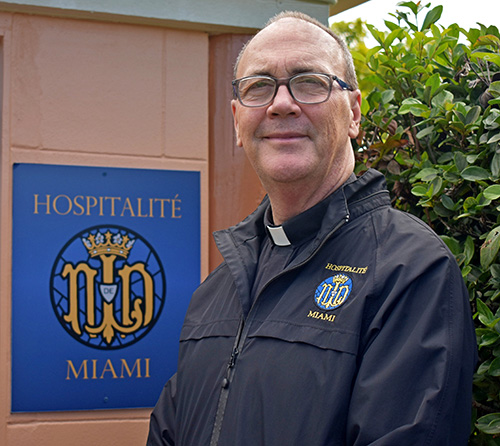 Msgr. Kenneth Schwanger, pastor at Our Lady of Lourdes Church, helped establish the archdiocesan series of pilgrimages to Lourdes in France. 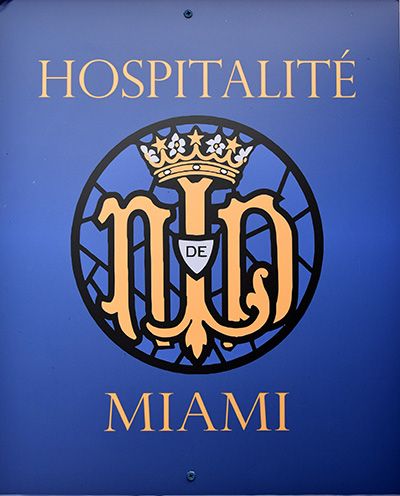 Hospitalité de Miami is so central to the mission at Our Lady of Lourdes Church, the group has its own meeting room, marked with a large plaque.

Why? He smiled at the question. "Because she's our patroness. It's not by coincidence when patrons are chosen."

From that visit, word spread and interest mushroomed. The second year brought 12 from Miami; the next trip, twice that size; this past year, the total was 200, counting both pilgrims and volunteers.

In 2015, the parishioners organized formally, and Archbishop Thomas Wenski of Miami endorsed it the following year. Finally, in 2017, the headquarters at Lourdes approved the local group — the first formally organized archdiocesan Hospitalité in the United States, according to Msgr. Schwanger.

"It belongs to the whole archdiocese," Msgr. Schwanger said. "And anyone from the archdiocese can be part of it."

Nowadays, Hospitalité de Miami organizes trips to Lourdes each July and September, promoting it via a website. The site includes prices, a reservation form, and videos of past pilgrimages. It even has downloadable booklets on the Hospitalité ministry and about St. Bernadette and her meetings with Mary.

The pilgrimage earned high praise from Archbishop Wenski, who first visited Lourdes this past summer. He celebrated several Masses, including one in the underground basilica with some 20,000 people.

"Lourdes is a special place," the archbishop said. "While a few do find physical healing — and there are beautiful testimonies of people cured — I would daresay that most find spiritual healing. Even those who return home without a physical cure, go home with faith strengthened, hope renewed and comforted by the love of God and of Mary."

The lay volunteers describe their times at Lourdes equally lyrically. Sights and sounds of Mass and the rosary. Shared music and prayer with people of various beliefs, like Muslims and even atheists. Even details like drinking coffee out of soup bowls.

A BIT OF LOURDES 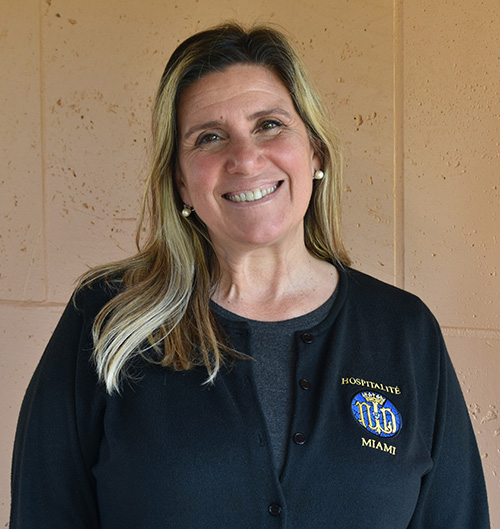 "I go there tense from all the stuff going on in my life," said Cristina Fernandez, a member of the advance team. "But when I get there, it's so much joy. You get plugged in, and you can't live without it. And when you come back, you feel a little bit of Lourdes here."

For high school teacher Tim Van Scoy, the highlight is the unity in diversity: people of various colors, languages and homelands gathering for worship, prayer and healing.

"When you go to church here, you equate it with your parish and the people around you," Van Scoy said. "When you go to Lourdes, you see that you are truly part of a worldwide Church. I realized that service is how God shows his love for us."

But don’t confuse a pilgrimage with a vacation. The Miami volunteers spoke cheerfully of long, hot workdays up to 16 hours, washing dishes, serving water, pushing wheelchairs and strollers on uphill paths.

"But at the moment, it didn’t seem hard — it was pure joy," remarked Gabriella Rodriguez, who pushed an invalid girl along cobblestone streets. "It was what I was meant to do."

Mercy Baglio has served in a range of positions — youth work, hospital work, the lost and found department, lowering the sick into the waters — guided by the site's elaborate system of trainers and mentors. But she said she found just as much fulfillment washing dishes.

Baglio, in her eighth year with Lourdes, said her inspiration was a quote by Bernadette about her broom. "I want to be the one that does her job, then goes back in the closet and nobody knows about it."

"I had no intention of going," Filippo Baglio, a former official for the Department of Homeland Security, admitted with a smile. "I was retired and happy."

Unfortunately — or fortunately, in retrospect — Mercy invited friends over, and they all pressed Filippo to attend. He soon found himself in France at a local train station, helping people in wheelchairs and stretchers.

THE FACE OF GOD

He marveled at the gentleness of the volunteers in helping the disabled off the trains and onto buses. His final change of heart came at Lourdes itself.

Mercy and Filippo Baglio are leaders in Hospitalité de Miami. 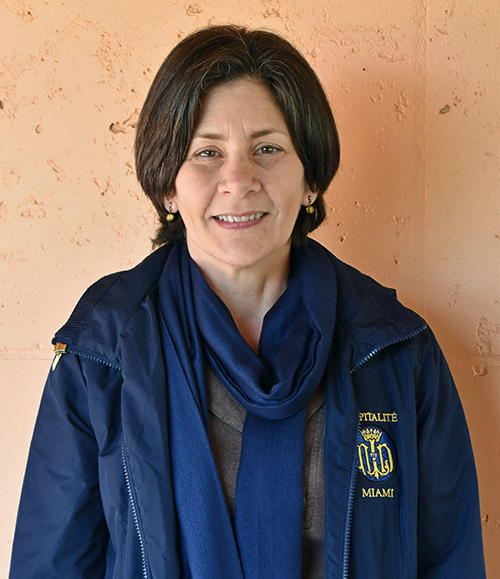 Fanny Garcia-Dubus is the tour director for the semi-annual trips to Lourdes.

"When you get there and see so many people with sickness — then see the smiles, the tears, the shivering, the laughter — you see the face of God," Filippo said. He's now the president of Hospitalité de Miami.

Michelle Rodriguez, a teacher at Our Lady of Lourdes School, supervised the youth and young adult group during her first trip in 2017. She remembered the visit for an "extreme peace ... a small piece of heaven on Earth."

Even more, Rodriguez was struck by the generosity of the teens on the trip — including her own three kids — despite the 12-to-16-hour workdays. "It was amazing to see teenagers being unselfish. We all agreed that it was the best trip of our lives."

And yes, the volunteers from Hospitalité de Miami say they’ve seen miraculous fruit. One was Vittorio Micheli, who in 1976 became the 63rd verified Lourdes healing. X-rays showed that a pelvic tumor had eaten away a joint socket, leaving his left leg dangling. But after bathing in the spring at Lourdes, Micheli's pain stopped and he eventually began walking. Newer X-rays showed a reconstructed pelvis.

"He laughed and joked and told his story humbly, without exaggeration," marveled Filippo Baglio, who met Micheli in 2016.

But what percentage of the attendees are actually healed? The Hospitalité workers echoed Archbishop Wenski's words: The healings don’t have to be physical.

Van Scoy gave a case in point: a woman with brain cancer at Lourdes. "She had electrodes in her head, and she was terrified of dying. And she came away with peace in her heart. She was no longer afraid."

Fanny Garcia-Dubus, tour director of Hospitalité, told of a spiritual healing of her father four years ago. After her mother died, her father visited Lourdes only reluctantly. But once there, he began a close relationship with Mary that lasted until his own death in 2017.

"He told me, 'The best gift you could give me was to meet my Mother,'" she said.

The Miami parish replicates some of the Lourdes observances as well. On the 11th of each month, the congregation sponsors an outdoor procession, alternating between the Eucharist and the rosary. Next scheduled event, Feb. 11, falls on the feast of Our Lady of Lourdes. The events commonly draw 2,000 people, some of them bused in from around the archdiocese.

"It's the spirit of Lourdes," said Sister Margaret Ann Laechelin, principal of Archbishop Coleman F. Carroll High School, who has also gone on the pilgrimages. "You experience the love of Mary, and how she is drawing us to her Son." 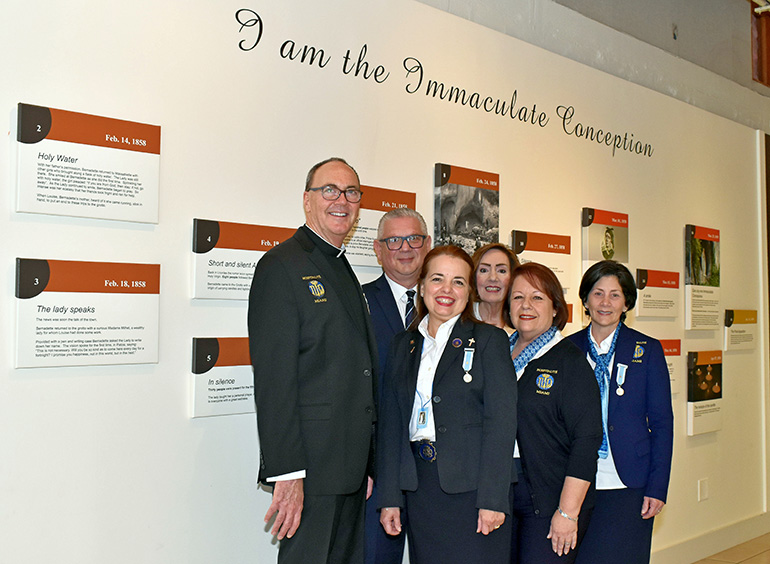 Members of Hospitalité de Miami gather at the timeline wall at Our Lady of Lourdes Church in Miami. Standing with Msgr. Kenneth Schwanger, the pastor, are, from left: Filippo Baglio, Mercy Baglio, Debra Bartkowski, Carmen Van Scoy and Fanny Garcia.