Served as missionary in Venezuela before coming to teach, work in South Florida 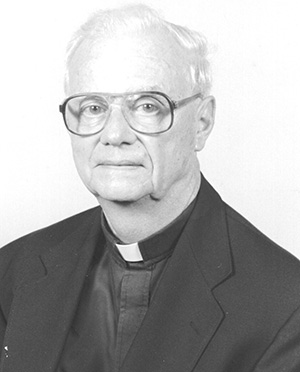 FORT LAUDERDALE | Funeral services will take place Monday, March 4, at St. Helen Church here for Father Lawrence Lyons, a former Edmundite priest who served in the missions in Venezuela until coming to South Florida in 1974.

Father Lyons, who turned 90 in November, died Feb. 26. He had been a priest for 64 years and retired in 1993. For many years after his retirement, he served as chaplain at St. John’s Nursing and Rehabilitation Center, where he also resided.

“CHS lost a dear friend and spiritual advisor,” wrote Joseph Catania, CEO of Catholic Health Services, in an email. He noted that “Father Larry, as he was known to many,” had lived on the agency’s North Campus for many years, serving as a chaplain there for a time and residing first at St. Joseph Towers, then St. Joseph Residence and most recently at St. John’s Nursing Center.

“And while all three, including Catholic Home Health, cared for him over the years, he has continued to care for us. He has celebrated with us and he has been a source of strength and comfort in our shared losses. He will be greatly missed,” Catania said.

Lawrence Francis Lyons was born Nov. 25, 1928 in Pittsfield, Massachusetts, and ordained June 5, 1954, in Burlington, Vermont, for the Society of Saint Edmund.

He obtained a bachelor’s degree from St. Michael’s College in Winooski, Vermont, and a second bachelor’s in theology from St. Edmund’s Seminary in Randolph, Vermont. He then studied for a master’s in philosophy at the Pontifical Institute of Medieval Studies of the University of Toronto, and obtained a doctorate in philosophical theology from the Catholic University of America.

In addition to English, he understood French and was fluent in Spanish.

After ordination, he served for about a decade as a missionary in Caracas, Venezuela, describing his work as “everything from barrio work, community development, mission promotion, literacy classes, etc., to seminary administration and teaching, work with charitable foundations and a university professorship.”

In fact, he helped establish the national seminary in Venezuela and served there as dean and professor. But after seeing “the ever-increasing number of well-trained Venezuelans” able to administer and teach in the country’s Catholic institutions, he felt called to the Spanish-speaking apostolate in the U.S.

“I begin to feel that perhaps the Spanish-speaking of my own country are almost as much in need of trained personnel as are the Venezuelans,” he wrote in applying to come to the Archdiocese of Miami in the fall of 1973. “I would like to help them if I can.”

He also said he wanted to continue “a limited academic role” because of his background in education.

In August 1974, Father Lyons was appointed to the faculty of St. Vincent de Paul Regional Seminary in Boynton Beach, where he served until 1980. He also taught for a year (1988-1989) at St. John Vianney Seminary in Miami.

This article has been updated: The quote from Joseph Catania, of Catholic Health Services, has been added.

Deacon Michel duChaussee - 03/04/2019 10:33 AM
I met Fr.Larry when he served at St. Bartholomew. My wife and I had gone to confession and we really unburdened on him. He responded later by following up and visiting our home and a friendship ensued. He encouraged the pursuit of higher education for my children. He became my confessor and spiritual director, and helped me to discern the call to the diaconate. The obituary gives us times and dates but do not tell of him being bitten by snakes or stung by scorpions in the South American jungles or his encounters with armed revolutionaries and counter-revolutionaries; all for the sake of the Gospel. In one of his annual Christmas letters he once described himself as this gringo who discovered his humanity in the barrios of South America." They do not tell of his love for his family, especially Jack, his brother , his cousins, nephews and nieces. They do not tell of his love for the priesthood and of course the Church and his Lord. I miss and will continue to miss the man who was counselor, confessor, priest and, above all, friend. Until we meet again. Requiescet in pace.

Fr. Mark Heuberger - 03/01/2019 10:53 AM
I have fond memories of Fr. Lyons. He served as my spiritual director, and professor during that same period at St. Vincent de Paul Seminary. I will always be grateful for his spiritual guidance and scholastic ability.