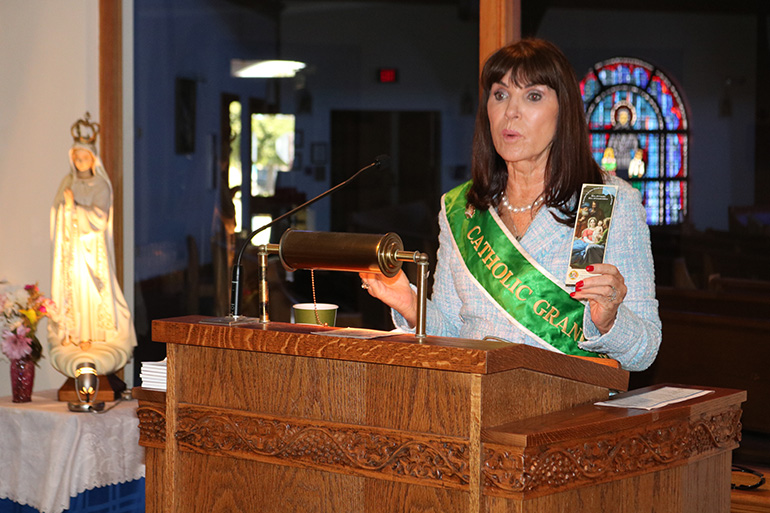 Catherine Wiley, founder of Catholic Grandparents Association, talks to parishioners gathered for the launch of a new ministry aimed at helping and supporting grandparents throughout the Archdiocese of Miami. The informational session was hosted Feb. 20, 2020 by Assumption Parish in Lauderdale-By-The-Sea.

LAUDERDALE-BY-THE-SEA | Father Michael Greer reflected back to his childhood and the astounding models of faith who spiritually influenced him the most, and then, he shared his thoughts.

Father Greer, pastor of Assumption Parish in Lauderdale-By-The-Sea, spoke Feb. 20 during a meeting introducing a new ministry offered by the Office of Marriage and Family Life: a grandparents ministry. People representing 10 parishes were on hand along with representatives of the office and special guest speakers.

The meeting was the first in a series of four informational sessions, hosted at different parishes and designed to showcase the new grandparents ministry. Our Lady of Lourdes Parish in Miami hosted the second meeting Feb. 21. The final two meetings will take place Thursday, March 12, at Immaculate Conception Church in Hialeah, and Friday, March 13, at St. Maximilian Kolbe Parish in Pembroke Pines. Both will be in Spanish and start at 10:30 a.m. 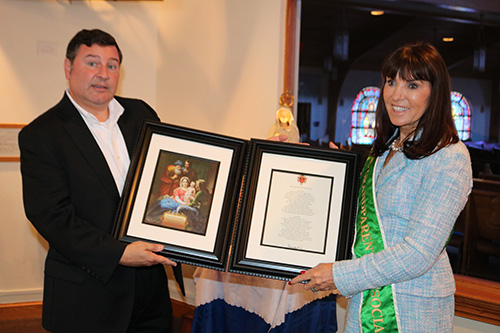 Stephen Colella, cabinet secretary of Parish Life in the Archdiocese of Miami, holds a picture of the Holy Family and a framed prayer for grandparents with Catherine Wiley, founder of the Catholic Grandparents Association. She was asked to speak at an informational session for a new grandparents ministry being launched by the archdiocese. 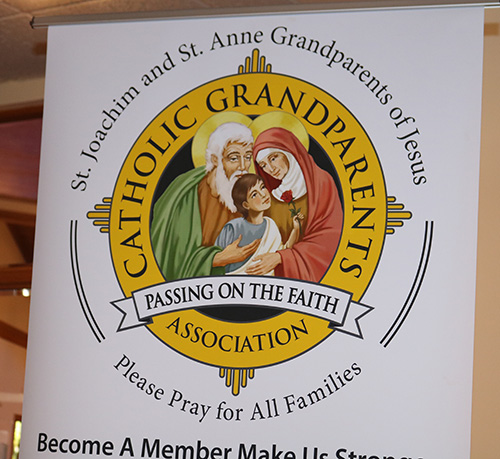 A poster featuring the Holy Family is part of the displays at a meeting held Feb. 20, 2020 at Assumption Parish in Lauderdale-By-The-Sea. The meeting was designed to inform participants about a new ministry aimed at helping and supporting grandparents in archdiocesan parishes. 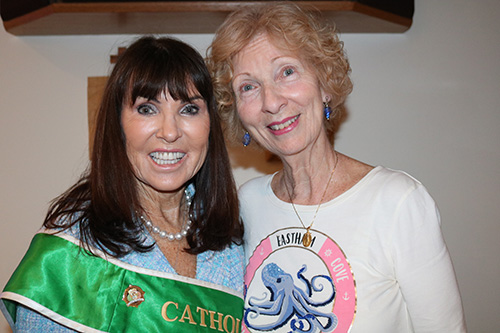 Catherine Wiley, left, founder of Catholic Grandparents Association, poses for a photo with Dolores McDiarmid, of St. John the Baptist Parish in Fort Lauderdale, Feb. 20, 2020, during an informational meeting for a new grandparents ministry to be launched in the Archdiocese of Miami. McDiarmid is interested in the new ministry. Wiley was asked to speak about the vocation of grandparents in passing on the faith to younger generations. 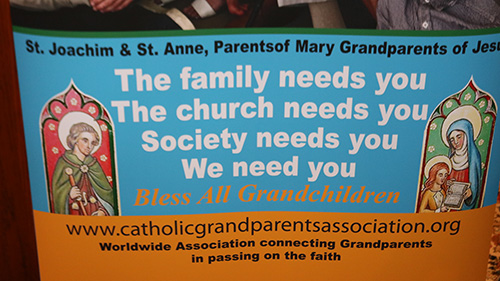 A sign displayed at an informational meeting on a new ministry to grandparents promotes the importance of the grandparenting role. The meeting took place Feb. 20, 2020, at Assumption Church, Lauderdale-By-The-Sea. 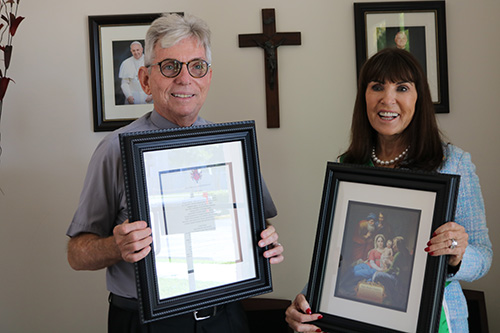 Catherine Wiley, founder of the Catholic Grandparents Association, presents Father Michael Greer, pastor of Assumption Parish in Lauderdale-By-The-Sea, with an image of the Holy Family and a framed prayer for grandparents. Father Greer hosted a meeting at his church, Feb. 20, 2020, to launch the new grandparents ministry in the Archdiocese of Miami.

“We noticed this age group is neglected,” said Adriana Perez, coordinator of the archdiocese’s marriage ministries, referring to the seniors sitting in the pews, a group much different from grandparents of former eras. Today’s grandparents are healthier, more active and want significance and involvement, especially with the people they love the most, their grandchildren.

“We want to get people involved,” said Perez. “Grandparents are an important part of the family. They keep the faith alive.”

The ministry is targeted at bringing seniors together in the spirit of community, fellowship, support and evangelization. Ideally, the parish-based program will offer them spiritual, educational and social opportunities, as well as regular get-togethers when the grandmothers and grandfathers can discuss any issues.

The archdiocese contacted Catherine Wiley, founder of the Catholic Grandparents Association, for guidance and direction as the ministry begins. Wiley, a native of Ireland and part-time resident of Delray Beach, is celebrating 50 years of marriage. She is the mother of four and grandmother to 10.

She began the Catholic Grandparents Association 20 years ago with the idea of promoting the vocation of grandparents and the important role they play in keeping the faith alive, by passing it down from generation to generation. Her organization has grown worldwide. It now has association chapters and offers annual pilgrimages as well as a variety of resources.

“This is the first time we have launched a ministry in an archdiocese,” said Wiley, speaking at the informational meeting. “I am here today because I love my Church. I love my faith. I want to pass it along. We are living in a very difficult world. Passing on the faith is critical. The vocation of grandparenting is to pass along the faith.”

Wiley discussed some of the many issues faced by Catholic families all over the world. The definition of family today and family in the past are far from similar. Among the problems are divorce, remarriage and blending of families, single parent households, substance abuse, issues relating to sexuality, differences of beliefs and values.

Wiley shared her own family experiences and hurdles when it comes to passing on and encouraging the faith.

“We are no stranger to all the challenges,” she said. “We all share these things. We need a way to gather and share and talk and figure out how to do something. Today, in this very place, is where we start. We are gathered here today. So we know we are moving forward.”

At the end of January, Wiley led a workshop in Rome during a conference called by Pope Francis on the pastoral care of the elderly entitled, “The Richness of Many Years of Life.” The event was organized by the Vatican’s Dicastery for Laity, Family and Life and held to discuss the present culture of “discarding” the elderly.

But the event highlighted the important role of seniors in the family, and their particular vocation in the Church. The pope said that old age “is not a disease, it’s a privilege,” and the elderly “are the present and tomorrow of the Church.”

“We must change our pastoral routines to respond to the presence of so many older people in our families and communities,” he said, adding that it is important for “the old and the young talk to each other. It is so important.”

Joan Archbold, of St. Maurice at Resurrection Parish in Dania, attended the meeting at Assumption.

“I have three grandchildren,” she said as she showed off photos of her little ones. “I want to find out what role I can play as a grandparent. Unfortunately, we are losing the younger generation. They are too busy for church and prayer. You have to show them by example.”

Another participant was Pat Solenski, of St. Anthony Parish in Fort Lauderdale, who has five grandchildren.

“I think it would be wonderful to have a grandparents ministry at our church,” she said. “Grandparents could come together to share information, have a spiritual experience, pray together, grow together.”

Stephen Colella, cabinet secretary of Parish Life for the Archdiocese of Miami, spoke at the meeting’s closing. He said that six to eight weeks after the informational meetings, training sessions will begin to help parishes launch the program in their communities.

“Nag your pastors. Nag your friends so that you can get this going in your parish,” said Colella.

Lord Jesus, you were born of the Virgin Mary, the daughter of Saints Joachim and Anne. Look with love on grandparents the world over. Protect them. They are a source of enrichment for families, for the Church and for all of society. Support them. As they grow older, may they continue to be for their families strong pillars of Gospel faith, guardians of noble domestic ideals, living treasuries of sound religious traditions. Make them teachers of wisdom and courage, that they may pass on to future generations the fruits of their mature human and spiritual experience.

Lord Jesus, help families and society to value the presence and roles of grandparents. May they never be ignored or excluded, but always encounter respect and love. Help them to live serenely and to feel welcomed in all the years of life which you give them.

Mary, Mother of all the living, keep grandparents constantly in your care, accompany them on their earthly pilgrimage, and by your prayers, grant that all families may one day be reunited in our heavenly homeland, where you await all humanity for the great embrace of life without end. Amen.

Gustavo - 03/05/2020 12:00 PM
Great new ministry for Grandparents. I remember my grandmother was the first to teach me and my brother are first prayers. It’s something that has always stayed with me. It’s also good to remember that there are many lonely and widowed Grandparents.. Many blessings to all are Grandparents living and deceased.