Catholic university president stresses the value of morality in education 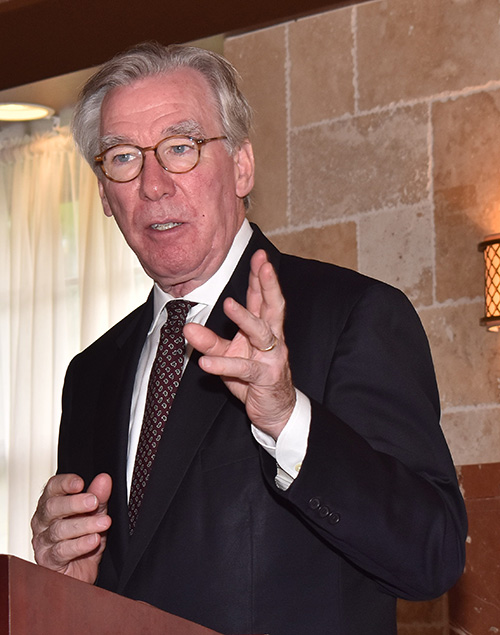 MIAMI | What are Catholic universities good for? Well, for one, to counter secular society, a respected educator told local activists.

"You don’t raise your children, the culture does — with TV, movies, magazines, the internet and cellphones," John Garvey, president of Catholic University of America, said during the annual White Cross Brunch.

His listeners laughed but ruefully agreed. As members of the Cuban Association of the Order of Malta, they had already given him this year's Tuitio Fidei award, for helping defend the faith.

Juan Tomás O'Naghten, president of the Cuban Association, voiced elation at landing the speaker. "John Garvey is one of the leading lights in Catholic education," he said.

The brunch, held Oct. 20 at St. Raymond Church, was a sort of after-party for the annual White Cross Ball, held the previous night at the Riviera Country Club in Coral Gables. This year's ball drew more than 240 people.

Garvey, president of the Washington, D.C.-based university since 2010, took a dignified, professorial tone, quoting several sources like Cardinal John Newman, who had been canonized just a week earlier in Rome. But his theme was emphatic: the flawed approach of secular schools in teaching facts but not morality.

A major problem, Garvey acknowledged, is that unlike many subjects, ethics must be lived in order to be learned and virtue must be modeled, not taught. Hence the need for a community like a Catholic university.

"No one is an expert on ethics," he said. "We don’t reach a conclusion with a logical argument. We experience it on many occasions, and not in one pure, unadulterated form Ã¢â¬Â¦ Virtue is something we have to practice before understanding."

PIECES OF A PUZZLE

The intellectual life of a Catholic school works much the same way, the speaker said. He compared an intellectual community to several people working on a jigsaw puzzle, with each person's part advancing the overall result.

"It should be a community committed to find truth and goodness and beauty," Garvey said. "It works if you get the right people sitting around the table."

Garvey gave the example of CUA's decision to end coeducational dorms in 2011. He said that studies had shown such a move would reduce not only casual sex, but depression and alcoholism as well.

He noted the reaction: "It was accepted without a fuss on campus, but it caused a media firestorm. We'd questioned the idea that consensual sex outside of marriage was healthy." 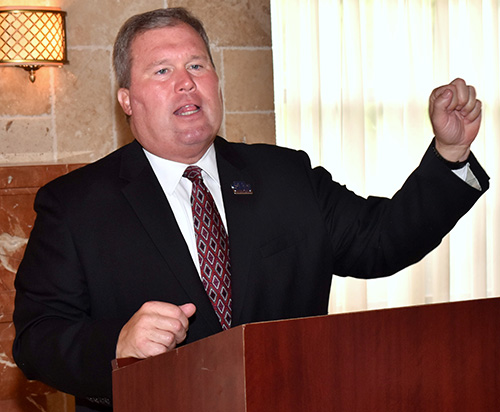 "One of society's challenges is to recover its beliefs and moral values," Calvo said. "Without that, society breaks apart."

TO DEFEND THE FAITH

Aramis Perez, also at the brunch, echoed the sentiments. "Seeking truth is sorely needed. Especially truth-seeking universities that encompass all knowledge, and direct it to a higher purpose."

The Tuitio Fidei award springs from the order's other charism, to defend the faith. The award's name is an abbreviation of the motto for the Order of Malta: "Tuitio fidei et obsequium pauperum, or "Defense of the Faith and Service to the Poor."

Past Tuitio Fidei awardees have included Cardinal Sean O'Malley of Boston, theologian George Weigel, Archbishop Thomas Wenski of Miami, and philanthropist Tom Monaghan. The latter donated most of his fortune toward the founding of Ave Maria University, a private Catholic school in southwest Florida.

The Cuban association is a special branch of the Sovereign Order of Malta, a military group born in Jerusalem around the turn of the first millennium. Born on the Caribbean island in 1952, the Cuban group broke up in 1959. It regrouped in Spain during the 1970s, then the Miami area a decade later.

Today, the Cuban association has about 120 members, including 70 in South Florida, 35 to 40 in Puerto Rico, and a few still in Cuba. Its charism for benevolence draws it to run 60 feeding programs for the elderly in its homeland, as well as frequent medical missions to the Dominican Republic.

Introducing Garvey's talk was David Armstrong, president of St. Thomas University in Miami Gardens. But where Garvey was cool and scholarly, Armstrong was forceful and vehement.

"The Founding Fathers said that to form a democratic, responsible citizenry, they needed virtue and knowledge," Armstrong said during an interview after Garvey's talk. "And they knew that the best way to get that was through religion.

"People today try to separate virtue from education," continued Armstrong, who served as president of St. Thomas More College in Kentucky before coming to STU in 2018. "But all universities come from the Catholic intellectual tradition: to seek truth, no matter where it leads, knowing that in the end, God is at the center."