Barry's new president: 'It's your university'

At inauguration, Mike Allen sets inclusive tone, promises 'we are going to make you proud' 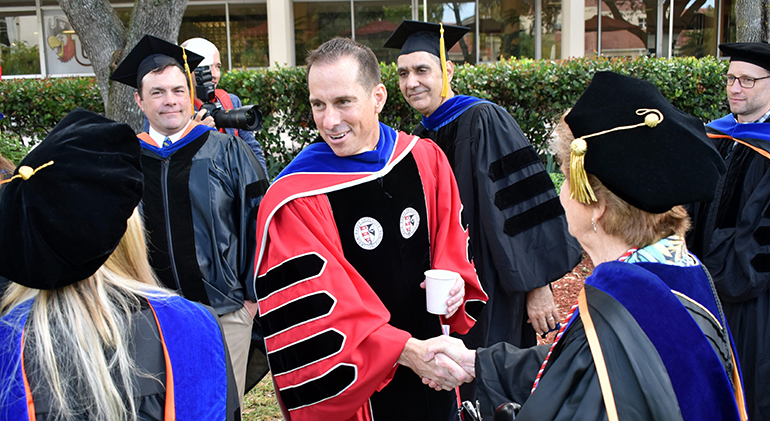 Mike Allen shakes hands with faculty members before his inauguration as president of Barry University.

MIAMI SHORES | Faculty and deans queued up separately for the inauguration of Mike Allen as president of Barry University. Only one man crossed the lines: Allen himself.

The grinning, red-robed figure plunged through the double line of black-robed teachers, shaking hands, pausing whenever someone whipped out a phone camera for a selfie with him. Only after he’d shaken the last hand did he return to the deans.

Joining the procession across the campus, Allen shrugged off the gesture with another of his bright smiles. “Our faculty is our talent. I want to let them know how much we appreciate them.” 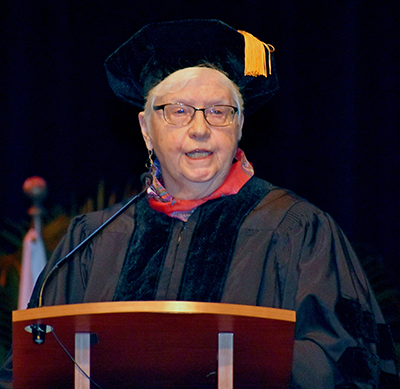 Sister Patricia Siemen, prioress of the Adrian Dominican Sisters, speaks during the inauguration of Mike Allen as president of Barry University. 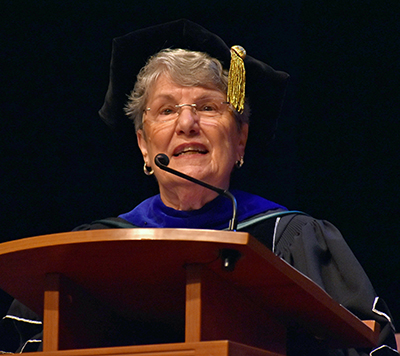 Sister Linda Bevilacqua, past president of Barry University, presents the symbolic chain of leadership to Mike Allen during his inauguration as the next president.

Charles Southerland, a professor of podiatric medicine, supplies traditional bagpipe music for the inauguration of Mike Allen as president of Barry University.

Since taking office in July, Allen has already become known for many things: first male president, first lay president, first president not a member of the Adrian Dominican Sisters, who founded the university.

Just as visible, though, is another mark: giving everyone — students, teachers, administrators — the feeling that he has their backs.

“He makes sure that everyone in every group is acknowledged and appreciated,” said an admiring Shauni Wall, a doctoral candidate in higher education.

“He’s someone we’ve needed,” agreed Oriana Camargo, an MBA candidate. “Things are changing around us, and he’s poised to represent the students.”

“Ecstatic, overjoyed — I don’t have enough superlatives,” she said at a luncheon after the Nov. 13 event. “I’m a former teacher and principal, but the professor-student relationship is most important. We all need each other.”

Barry realized it needed a new president in 2018, after Sister Linda Bevilacqua announced her retirement from the job she’d held since 2004. After a six-month search and 45 candidates, a special committee hired Allen away from the Catholic University of America.

The new president comes with several layers of experience. At CUA, Allen served in two vice presidential posts: first over athletics, then over student affairs. Before then, he designed and ran academic support programs at Florida Atlantic University and the University of Connecticut.

During his quarter-century in education, Allen grew a specialty in prodding students toward social engagement and schools toward student diversity. He also gained a reputation for fundraising, obtaining about $62 million for several building and equipment projects at CUA.

His formal inauguration was scheduled for Nov. 13 to fall amid Founders’ Week, the annual celebration of Barry’s history and Adrian Dominican heritage. The six-month interval gave the events committee lots of time to do it up big.

More than 950 people attended the event at the Shepard and Ruth K. Broad Performing Arts Center, with many more viewing via web streaming. Robed deans, teachers, board members and others processed to music by members of the New World Symphony and the Josef Gingold Music Festival of Miami.

Introducing Allen was Sister Patricia Siemen, a Barry board member and national prioress of the Adrian Dominican Sisters. She praised him as a “visionary leader,” shown in his emphasis on student development and “constant attention to working closely with staff and faculty.” And, as important, a “dedication to civility, kindness, compassion and respect.”

Sister Linda paid similar compliments to her successor as Barry president, but with an impish twist. “I am very confident that you will exercise your responsibilities with integrity, honesty, honor, pride — and lots of fun.”

She and Allen’s wife, Beth, then placed the ceremonial chain, a symbol of the presidential office onto his shoulders — drawing laughs from the audience as he stooped slightly for the tiny nun to reach. With the chain in place, he straightened up for a kiss and hug from his wife. 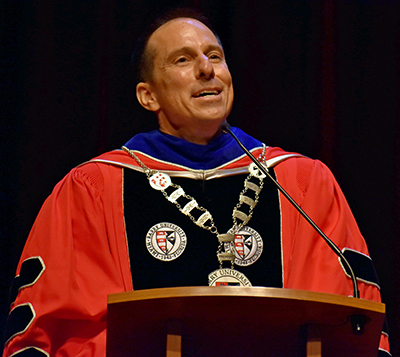 Mike Allen gives his inaugural address as the new president of Barry University.

He began his 22-minute acceptance speech with a signature joke: “I hope you’re still clapping when I’m done.” He then drove forward the themes of inclusion and collaboration that have marked his career.

He said the day was not only for him, but a “celebration of our university... The best leaders are competent enough to surround themselves with talented individuals and let them do their good work.”

Allen promised to promote Barry’s values blending “intellectual development with spiritual growth.” He pledged also to continue fostering an “inclusive, diverse and welcoming environment,” with educational opportunities for underserved people. And he vowed to continue accenting the common good and social engagement.

He noted the university’s tradition of doing good in society and improving the world. He gave several examples among the 65,000 alumni, including an autism expert, a former prime minister of Haiti, a podiatrist working with Special Olympics, a volunteer helping Syrian refugee children in Lebanon.

“We have a saying here at Barry: Our graduates do well, but they also do good,” Allen said.

He boasted also of Barry’s Center for Human Rights, its law school, its biomedical science program, a laboratory fighting cyber attacks, and what he said is the only Catholic podiatric school of medicine in the U.S.

He ended with an appeal, announcing a publicity campaign to make the university’s accomplishments better known.

“We will begin to tell our story with force and vigor,” Allen concluded. “We are going to make you proud in everything that we do. But we need your help, and we need your passion. It is time for all of us to make this happen together.”

It was the precise tone Allen wanted for the day, said education dean Farrell, who was part of the event committee and presidential transition team.

“From day one, he said, ‘I don’t want this to be about me — it’s your university,’” she recalled. “It would be an opportunity to let the world know about us and the impact of Barry. He wants students to be transformed and then to transform the world.” 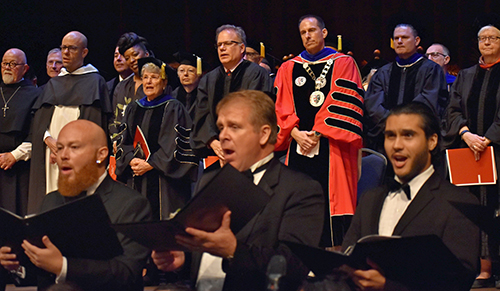 Mike Allen listens to the singing of the Barry University alma mater after his inauguration as the university's new president.

The reach of Barry University was illustrated by the list of short greetings by a variety of VIPs. They included Carlos Gimenez, mayor of Miami-Dade County and a 1999 graduate of Barry; Teresa Rodriguez, an anchor at Univision and a 1979 alumna; and Mayor Crystal Wagar of Miami Shores, whose predecessor, John Thompson, cofounded the university in 1940.

The new president has also won over long-timers like Shauni Wall, who has spent 18 years at Barry in study and teaching. She voiced appreciation at Allen’s multiple skillset: experience in athletics, student relations, career development, diversity and inclusiveness.

“I’ve seen a lot of change, and I’m the most excited about what he brings to the table,” Wall said. “And he packages it well with a very good sense of humor. That’s important when times get tough.”

Other people got the message as well, while noshing during a luncheon under two big tents in front of the campus Cor Jesu Chapel.

Carmen McCrink, who teaches higher education administration, said Allen is student centered yet “also relates to us faculty in a collegial way,”

Added her friend Jean McAtavey, a specialist in human resource development: “He wants to make all that you’re doing shine, and to benefit the community.”

Soccer coach Steve McCrath spoke for many. “He’s clearly a down-home, roll-up-your-sleeves kind of guy. He’s working a family, not a room.” 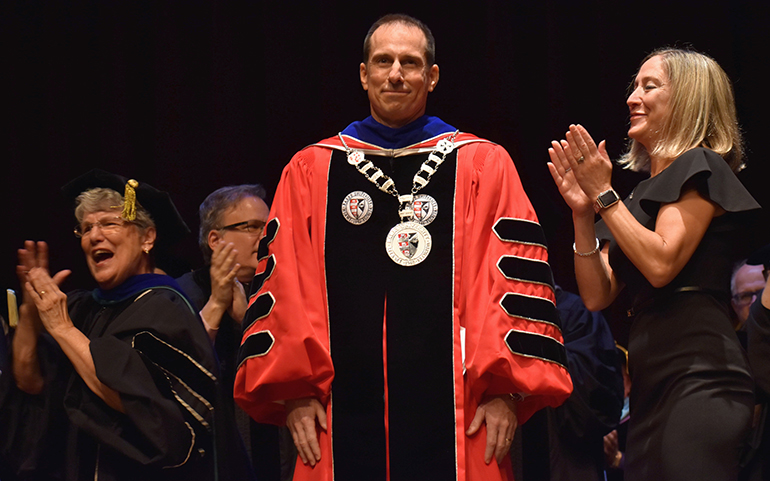