âYou donât do it for accoladesâ

A snapshot of honorees at the anniversary Vespers services

Image of the Jubilaeum Pin given to two people from each parish to mark the 60th anniversary of the Archdiocese of Miami.

Father Bob Tywoniak of Blessed Sacrament Parish in Fort Lauderdale waits for the vespers to begin with his parish's honorees, Douglas Smalls and Christine Crepage.

Honorees await the start of the 60th anniversary vespers.

Father Manny Alvarez, pastor of Immaculate Conception in Hialeah poses with the Jubilaeum Pin recipients from his parish, Andrew Izzo and Guillermo Gomez.

Archbishop Thomas Wenski delivers his message to honorees at the 60th anniversary vespers for the archdiocese.

Father Fernando Heria, rector of the Shrine of Our Lady of Charity in Miami, accompanies his parishioner, Ondina Menocal, to receive her Jubileaum Pin from Archbishop Thomas Wenski.

Marilyn and Andres Salani of Our Lady of Guadalupe Church in Doral go up to receive their Jubileaum Pins from Archbishop Thomas Wenski.

Sharon Brauer of Our Lady of the Holy Rosary-St. Richard in Cutler Bay receives her Jubileaum Pin from Archbishop Thomas Wenski.

Father Kenneth Whittaker, pastor of Our Lady of Mercy in Deerfield Beach, accompanies Lucy Guerasio to receive her Jubilaeum Pin.

Father Miguel Sepulveda accompanies his parishioners, Shirley Capra and Eva Gonzalez to the sanctuary to receive their Jubilaeum pins.

Rose Preseau, 101, leaves the sanctuary after being greeted by Archbishop Thomas Wenski. She is accompanied by fellow Jubilaeum honoree John Frink and her pastor, Father Steve O'Hala.

The Primum Regnum Dei award certificate given to William Benson of St. Gregory the Great parish in Plantation.

Primum Regnum Dei recipient William G. Benson and his wife, from St. Gregory the Great parish in Plantation, to the sanctuary to receive the award.

Ralph Lawson, chairman of the board of Catholic Health Services, receives his Primum Regnum Dei medal from Archbishop Thomas Wenski.

Father Jose Alvarez, Our Lady of the Lakes pastor, and Archbishop Thomas Wenski pose with the Primum Regnum Dei recipients from the parish, Alicio and Nirma Pina.

MIAMI | Recipients of the Jubilaeum and Primum Regnum Dei awards represented the great variety of people who make up the Archdiocese of Miami, as well as the myriad ways in which parishioners’ services have helped the local Church grow over the past 60 years. Here's what a few of them said about themselves and their work â and how they felt about their awards â after attending the Vespers at St. Mary Cathedral Oct. 7. 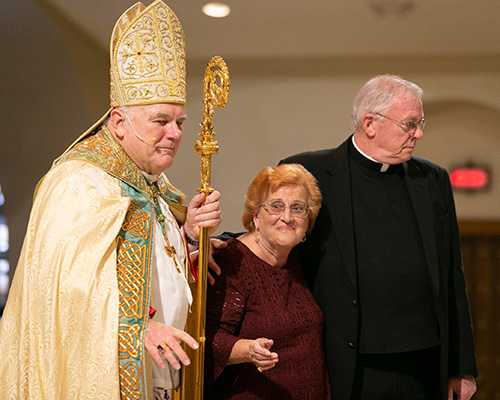 At 83, she keeps up a dizzying schedule: catechist, head usher at 8 a.m. Mass, helping count each week’s collection, even volunteering at a local public school. She also babysits on Thursdays at a Protestant church where her daughter attends.

“I love keeping busy, and I like what I'm doing,” Ignaccolo said in a phone interview. “I enjoy people; I enjoy working. I can't sit home and watch TV and play games. God's going to take me while I'm still going.”

“It was instilled in me that you help people,” said Blandino, who also attends All Saints Church, Sunrise. “Your faith is not just going to church, it’s getting involved.”

To him, that means teaching religious education, serving pancakes for a fundraiser, or heading up the local Knights of Columbus chapter. Blandino gathers confirmation students to work projects for service hours. And after Hurricane Irma, he helped coordinate food distribution at Century Village in Pembroke Pines.

“We're family â we help one another,” Blandino said simply. “That's what I try to live.”

Charlie Arazoza used to send his wife and kids to Mass. Now he not only attends daily Mass, but competes with a friend on Sundays at Epiphany Church in Miami for the best seat.

“I've been a member for 35 years but going for 20,” Arazoza said. The change came after attending an Emmaus retreat. “The scales were removed from my eyes,” he said. “I started playing catch-up.”

Nowadays, he helps lead the local Emmaus group and serves as a part-time usher. He also tries to arrive early on Sundays, ahead of fellow Primum Regnum Dei awardee Tom Beier â they both like to sit in the same spot.

Arazoza can even specify his favorite seat in a half-dozen churches, like St. Raymond, St. Brendan  or St. Catherine of Siena  â so he can drop in for daily Mass wherever he is around Miami.

“Just trying to keep busy in my retirement,” said Daria Bernstein of Little Flower in Hollywood. Busy indeed: Through the church’s St. Vincent De Paul Society, Bernstein makes an average of 12 visits daily, delivering food to homes of the needy.

In May, she and others of the society helped feed 385 adults and 199 children, according to Little Flower. Bernstein also serves coffee on Sundays and helps with the Columbiettes during the annual carnival.

But she deflects praise to parishioners who donate the food and funds. “I'm delighted to help the people. [But] I always say that the St. Vincent De Paul Society couldn't do anything without the support of the parishioners.”

“Pope Francis said in Rio to go out, be not afraid and serve,” Penelope Arango said. “I decided to do that.”

At St. Augustine in Coral Gables, that translates to heading the hospitality committee, volunteering in the financial office and serving as an Emmaus sister. Arango also attended archdiocesan meetings last year as a Parish Missionary Disciple, learning how better to serve at the parish.

She said she finds it enriching. “When you give, you get so much more back.”

“I was happy, and I humbly accepted,” Silvana Teresa Obregon said, when she heard she would receive a Jubilaeum award. “I know it was from God.”

Obregon leads the charismatic group at Gesu Church, Miami, where she has been attending more than a quarter-century. She also cooks for the groups once a month. And she volunteers at the church on Wednesdays.

She always seems ready to serve, said church secretary Lidia Rioscardena. “If we have to organize a fundraiser or a retreat, she's always in it.”

If there's such a thing as a religious power couple, Dan and Stormy Schevis may be an example. 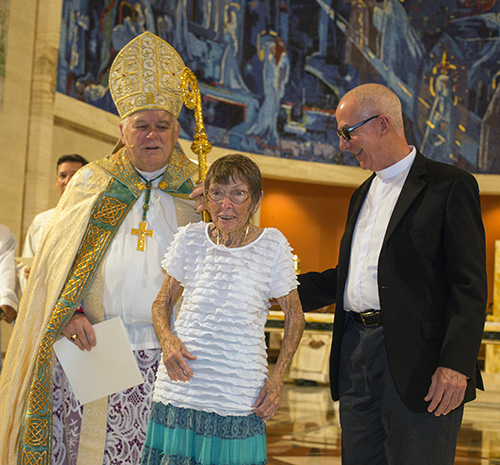 Dan is a lector and extraordinary minister of Communion at St. Anthony Church, Fort Lauderdale, where they are members. He teaches pre-Communion and first Communion. And he works as the church photographer.

Like other Jubilaeum awardees, the Schevises shrugged off the honor. “This is just who we are,” Stormy said. “You don’t do it for accolades. You do it because it’s in your heart.”

Pattie Fernandez can reach out without leaving her home. Each day, she e-mails an mp3 sound file containing a daily Gospel reading or meditation along with a little bio on the saint of the day.

But she doesn't stay home: At her parish, Good Shepherd in Miami, she serves as sacristan and extraordinary minister of Communion. She also works with the parish’s Women's Emmaus and Council of Catholic Women.

Typical of several other Jubilaeum honorees, she said: “I think I don’t deserve it. I think I do very little.  So many people do so much.”

But she admitted: “It’s nice to be recognized.”

Virginia Gaster accepted the Jubilaeum award tongue in cheek â but also for the 46 volunteers who help her run the food bank.

“It’s for my group â that's how we look at ourselves, because we’re so wonderful,” joked Gaster, of St. Peter on Big Pine Key.

More seriously, she said: “It’s a big honor, and we’re grateful. It’s a huge team effort. It’s good to know that what we do is valued not only by the parish but by the community.”

Some of the honorees contribute special skills. William G. Benson lends his knowledge as a CPA to the finance council at his church, St. Gregory  in Plantation. He is also on the archdiocesan audit subcommittee.

“It’s a natural carryover,” said Benson, who also chairs the board at St. Thomas Aquinas High School in Fort Lauderdale. “I feel like my input helps maintain financial health, so it can carry out its mission.”

Andres Salani likewise is a sound technician at Our Lady of Guadalupe, Doral. His wife, Marilyn, is the sacristan.

He offered a little advice: “If you want to see some good in the world, you have to contribute it. Don’t wait for everyone else.”