Renowned educator, supporter of Catholic education and women in sports

MIAMI | Marjorie Parker Wessel was a force to be reckoned with, especially when it came to women in sports and Catholic education.

The longtime president and, for many years, chief cheerleader of the Catholic Educators Guild, died May 23 at the age of 88. She had spent a lifetime advocating for the inclusion of women in sports and supporting Catholic education, while also devoting 50 years to teaching and administration in Miami-Dade County’s public schools.

“She was passionate about Catholic education and supported us 1000 percent,” said Msgr. Vincent Kelly, pastor of St. John the Baptist Church in Fort Lauderdale and former superintendent of schools for the archdiocese. 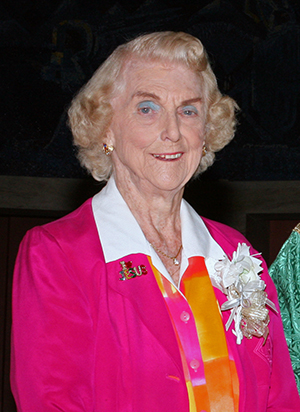 Marjorie Wessel, as seen in a file photo from 2013.

He noted that Wessel was a charter member of the Catholic Educators Guild and herself a 1982 recipient of its Lumen Christi (Light of Christ) award. The guild, known as the Catholic Teachers Guild when it was founded in 1960, has been dormant since about 2015, when Wessel’s health began failing. Its goal is to help Catholic educators, teaching in both public and Catholic schools, to uphold the values of their faith and be affirmed in their service.

“She was a lifelong member of that and passionate,” Msgr. Kelly said. “She was super. Very outspoken and very concerned about the community. She was great. I admired her greatly.”

Hope Sadowski, administrative executive assistant in the archdiocesan Office of Schools, also worked with Wessel for years. She noted that Wessel served on the accreditation committee of the Southern Association of Colleges and Schools — now part of AdvancEd. In that capacity, she visited Catholic elementary and high schools in the archdiocese to ensure their teachers and programs complied with the highest educational standards.

“She was always very involved and willing to help and give advice and guidance,” Sadowski said, noting that she was especially helpful to the high schools, particularly those serving low-income students.

“Marge was a great support in our accreditation reviews. We always waited to hear the word SUPER!!!” said Christian Brother Richard DeMaria, who succeeded Msgr. Kelly as archdiocesan schools superintendent.

Wessel was a Catholic school graduate and athlete herself, part of the women’s basketball team that won the state championship in 1946 for St. Mary’s Catholic School — now the cathedral school, which then went up to 12th grade. Wessel always boasted that its basketball courts appear in a scene from Bing Crosby’s famous film, “The Bells of St. Mary’s.” 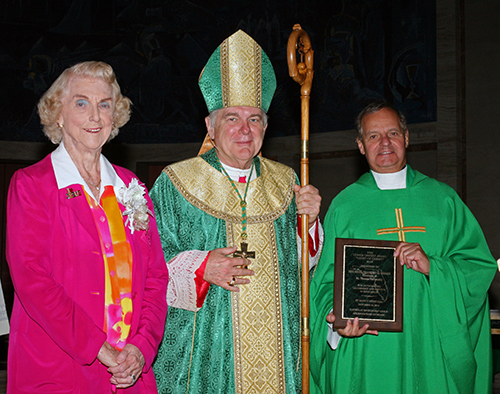 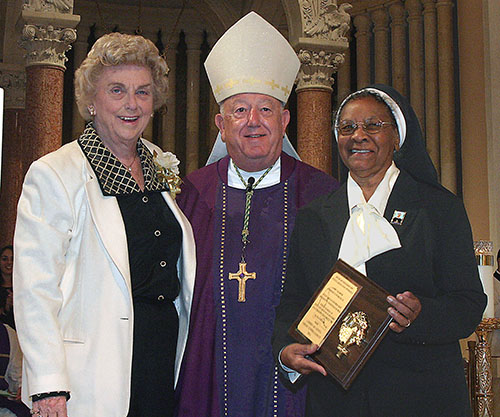 Marjorie Wessel, president of the Catholic Educators Guild, poses with Archbishop John C. Favalora and Sister Clementina Givens of the Oblate Sisters of Providence, recipient of the 2005 Lumen Christi award from the guild.

At St. Mary’s, Wessel learned from and took to heart the motto of her pastor and principal at the time: “Whatever we do for the boys, we will do for the girls.”

So when she saw early on in her teaching career that Miami-Dade County’s public schools were not treating female athletes the same as male athletes, she set about to change that.

“It was unfair for the girls who played sports to have to go buy T-shirts and shorts, when the boys got it all for free,” she told The Miami Herald in an article noting her retirement from teaching and administration in 2000.

Her efforts in the early 1970s led to the Title IX provisions being implemented throughout Dade County’s public schools. As the superintendent in 2000, Roger Cuevas, told the Herald, “Every girl who competes in varsity sports, from soccer to fast-pitch softball, owes her a tremendous debt.”

Wessel also worked to promote women’s athletics and sports in general as a founding member and longtime president of The Sports Society. The group raised funds for scholarships for girls as well as highlighting excellent athletic programs in schools. St. Mary Cathedral, Our Lady of Lourdes Academy and Sts. Peter and Paul School in Miami have all received honors and grants from The Sports Society.

Wessel also was devoted to St. Monica School (now closed) in Miami Gardens. It had been her and husband Joe’s first parish here and the elementary school their children attended. All three — Margie Wessel Scott, Joe Wessel and Ann Marie Wessel-Indorf — then graduated from Msgr. Edward Pace High School in Miami Gardens, where they also excelled in athletics. In 2002, the Wessels were the first-ever family inducted into Pace’s Hall of Fame.

ALMOST NOT A TEACHER

Born Nov. 13, 1930 in New York City, Wessel moved to Miami with her family, the Parkers, in 1940. She graduated from St. Mary’s in 1948 and entered Florida State University in Tallahassee, where she graduated in 1952 with a degree in social work. In need of work experience, she took an internship at Leon High School in Tallahassee, a decision that changed her life.

“I almost didn’t become a teacher. Isn’t that something?” she told the Herald in that 2000 profile.

After returning to Miami in 1952, she began teaching at Ben Franklin Elementary and then North Miami Junior High. In 1958 she began her career as an administrator, serving as assistant principal at Henry Filer Junior High in Hialeah; Hialeah Middle; Hialeah-Miami Lakes and American high schools; and finally at Norland High. Along the way she obtained a master’s in education and a doctorate in educational leadership from the University of Miami.

She retired from Miami-Dade County Public Schools in 2000, after 48 years in teaching and administration — the longest tenure at the time — but returned for two years, from 2006 to 2008, to serve as executive director for Doctors Charter School in Miami Shores.

Among other honors, Wessel was selected last year as one of the “60 for 60” who helped build the Archdiocese of Miami. She also received the Woman of the Year award from the University of Miami chapter of Phi Delta Kappa, the “Unsung Heroine” award from the City of Miami’s Commission on the Status of Women, and the Lifetime of Giving Award from The Sports Society, in addition to being named “Outstanding Citizen” by The Miami Herald in 1958.

Wessel is survived by her three children and their spouses, nine grandchildren and one great-grandson, as well as numerous cousins, nieces and nephews. She and Joe, who died in 2016, were married for 59 years.

“The legacy of Marge, Ms. Parker, Mom, Dr. Wessel, & Grams as parent, educator, mentor, and fan will live in the hearts of us all,” wrote her family in the obituary published May 27 in The Miami Herald.

In lieu of flowers, the family requests donations to the Marian Center, a school for people with intellectual disabilities located at 15701 N.W. 37 Ave., Miami Gardens, FL 33054.

D. Ann Saladino - 05/31/2019 01:09 PM
Dear Marge I’m sure God will put you as that special Guardian Angel over Catholic Education. You were one of the first fellow professional women I met when arriving in Miami- and at our beloved St Martha Parish. Little known is how much we shared about our passion for Catholic Ed — “priceless OPINIONS” about women's rolls in church, business, education. She and her equally loved and admired husband, Joe Wessel were treasures in the church, society, and yes World! Both were treasures in my life! I’m sure God knows He’s got two ready and waiting to get to work . Don’t think for a minute we have lost their influence. I want to also thank all their family for their faithfulness to all she and Joe inspired. May we as well.

Lidia Valli - 05/31/2019 10:37 AM
We keep Mrs. Wessel in our grateful prayer. Sister Lucia Ceccotti was awarded the Lumen Christ award and the ceremony was held here at the Marian Center. We thank God for all the accomplishments Mrs. Wessel had done in her life. We believe that in the Communion of Saints she will be advocating for all of us. May God welcome her! We are grateful for the donations already received in her name.

Vilma Angulo - 05/29/2019 05:25 PM
I was honored to have known Marge! A pillar of Catholic Education, her zeal and enthusiasm were legendary. Marge inspired all who met her. Her contributions to education are a legacy she leaves for future generations. Her quick wit and smile will long be remembered. Thank you Marge for also forging the way for our daughters and granddaughters to enjoy and succeed with equality in sports. May our loving God reward you for your unfailing faithfulness!

Kristen Buffone Hughes - 05/29/2019 04:23 PM
My mother, Mary Ann Buffone, was friends with Marge beginning when we first moved to Miami Shores and the Saint Rose of Lima community in the mid-1960s. When I was first teaching in Dade County public schools, Marge Wessel was a legendary academic leader at Norland Senior High. Mrs. Wessel was assigned to be an assistant principal at American Senior High School where I was a teacher in the mid-1970s. The school had been through a great deal of strife and upheaval and Mrs. Wessel was sent to help restore calm and order. I so respected her outstanding academic knowledge, ability, and insights. Her Catholicity and calm demeanor was so needed by adults and students alike. My contacts with then Dr. Wessel changed in the 1990s when I was an associate superintendent for the Archdiocese of Miami Department of Schools. Marge was very involved with the accreditation processes for Catholic secondary schools through the Southern Association of Colleges and Schools, now a part of AdvancED. Dr. Wessel also served on several educational committees for the ADOM. She remained a source of inspiration to me as an educator for many years. Her leadership, promotion of the interests of women and girls, her ever ready smile, and no-nonsense attitude made for many admirers and was an inspiration to the community. Kristen Buffone Hughes Principal Saint Andrew Catholic School, Coral Springs