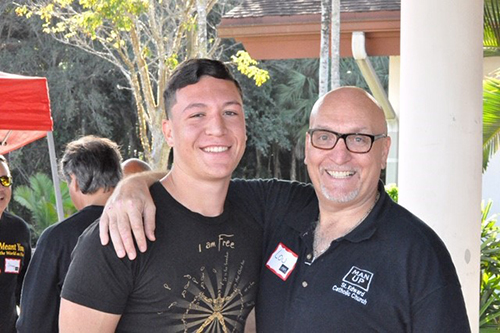 St. Edward parishioners Lou Paonessa and his son, Nick, pose for a photo after attending a ManUp conference.

PEMBROKE PINES | One parish here is making a big difference in the lives of men, and even helping build stronger families, through an annual conference featuring powerful speakers and interesting special touches each year.

“I was there for the inaugural conference, and it was a life-changing event for me,” said Carlos Vazquez, a parishioner of St. Edward, speaking about the annual “ManUp Conference,” now in its seventh year and scheduled for March 8 and 9 at his Pembroke Pines parish.

Baptized Catholic in his homeland of Cuba, he was totally unfamiliar with the faith or the sacraments, which he did not receive as a child. He said his conference 2013 experience inspired him to “man up” and learn more to help him grow closer to God and to pass the faith on to his children.

Vazquez’s attendance at the ManUp conference was all his wife’s doing. She had been nudging him back to the Catholic Church and desiring to raise the three Vazquez children in the faith.

He described the speaker’s message as “compelling” and said seeing the men gathered, “strong in faith,” was stronger than hearing about the Catholic faith from his wife.

“I was so glad I went. For the past seven years, I have been involved in the church,” said Vazquez, who later enrolled in the Rite of Christian Initiation of Adults to receive formation and the sacraments. Today, he volunteers as a youth minister at St. Edward and fully participates in parish activities. “I am looking forward to the retreat. It is life-changing for many.” 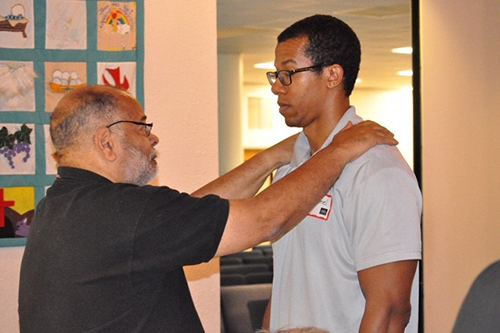 Men pray for each other during one of the ManUp conferences held at St. Edward Church in Pembroke Pines.

Ed Kolo, conference chairman, said the event is open to all men of the parish and archdiocese and to young men age 16 and older. The conference, themed “Come As You Are,” begins Friday at 6:30 p.m. with a simple supper followed by the evening program and adoration of the Blessed Sacrament. Saturday activities begin at 8 a.m. with breakfast followed by the program. Lunch is midday, and the sacrament of reconciliation is available throughout the day. The conference closes with a 5 p.m. vigil Mass open to participants and their families with main celebrant Father John Peloso, pastor of St. Edward.

“We are blessed to have a good turnout every year,” said Kolo, who expects up to 500 participants. “This year’s speaker is highly sought after.”

Guest speaker is Father Bill Casey of the Fathers of Mercy, a former officer in the U. S. Army. “He committed two years ago,” said Kolo, who booked Father Casey far in advance knowing his popularity in Catholic circles as a highly “respected and requested speaker with a charismatic personality.”

Kolo explained that Father Casey will likely touch on topics that men can relate to including the struggles, challenges and temptations of daily life. He also said that participants should be inspired and moved by the priest’s dynamic messages.

The Holy Spirit “always shows up and shows off,” said Kolo, noting that “countless men have returned to the sacraments, many after being away for decades and have re-assumed their role as the spiritual heads of their households.”

The conference was conceived by Father Peloso back in August 2012 when he first came to the parish as pastor. The inaugural conference took place January 2013 and has become an annual Lenten event featuring an array of speakers, authors, a world class champion surfer and major league baseball player. Kolo says the conference serves as a “springboard into the preparation of the Lenten season.” 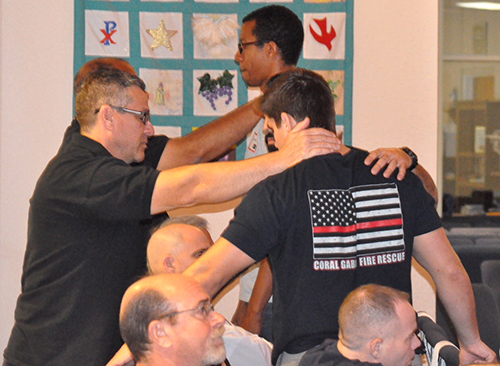 Men pray for each other during one of the ManUp conferences held at St. Edward Church in Pembroke Pines.

For the 2014 event featuring speaker Chris Stefanick, popular with younger generations, fathers were encouraged to bring along their teenage sons, and that is now a tradition. Two years ago, a volunteer translator joined the conference team to help Spanish-speaking attendees overcome language barriers during talks. The closing family Mass also was added in recent years.

“Along with those parishioners who regularly attend the vigil Mass for their Sunday obligation, an invitation is extended to all family members of the attendees from the conference to celebrate the Eucharist together and share as one family the Spirit-filled weekend just experienced,” said Kolo.

Laz Garcia, 21, a first-year student at St. Thomas University Law School in Miami Gardens, said he is looking forward to attending the conference with his father. He has attended the event three times and explained that his faith and relationship with God has been strengthened “every single time.”

Kolo said St. Edward Parish welcomes all men to the conference no matter where they may be on their journey of faith. “We are all on different levels. We are all sinners. We are all broken. This conference has something for everyone,” he said.