Immigration lawyer sees her work as a calling from God

Linda Dakin-Grimm also uses Church teachings to promote 'what is good, what is right, what Jesus wants us to do'

MIAMI | Linda Dakin-Grimm scored a degree from Harvard Law School, then enjoyed more than three successful decades in corporate law. She never thought she would end up defending starving, suffering refugees against the U.S. government.

Today, however, "I have a strong feeling that this is what I was meant to be doing," said Dakin-Grimm, a board member of several organizations that advocate immigrant rights.

While working as senior consultant partner in the Los Angeles area, at an international law firm, Dakin-Grimm leads a fourfold role in immigration advocacy.

She personally pleads the cases of families and unaccompanied children, many of them recommended by Kids in Need of Defense (KIND). She's currently working 50 cases in various stages of activity. 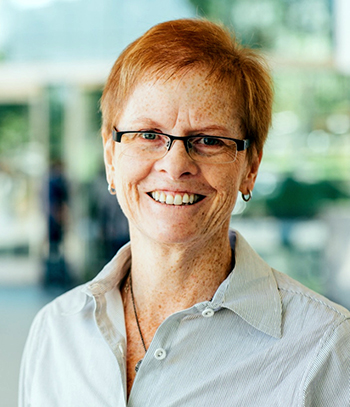 Attorney Linda Dakin-Grimm of southern California ended her 35 years as a corporate attorney to fight for immigrant rights.

She founded and leads a group that interprets and mentors migrant children, helping them with anything from language learning to school supplies. She is pursuing three lawsuits against the government in federal courts. And she recruits other lawyers who, like her, will work pro bono.

It was that role that first got her involved, she said in an interview. In 2014, a priest and friend asked her to provide some pro bono work for what is now the Southern California Catholic Task Force on Immigration for the Archdiocese of Los Angeles. He asked her to find other like-minded lawyers as well.

She researched how it was done at other law firms, and that led her to KIND, which was focusing on unaccompanied minors. She offered to take one of the children as a client, and the group sent a list of nine to choose from. Dakin-Grimm took them all. "I couldn't choose," she said.

She now sits on the board of the archdiocesan task force, which has grown to cover four dioceses in southern California. The group has also supported children Dakin-Grimm has brought to them.

On a more local level, Dakin-Grimm joined the pastoral council of her parish in Manhattan Beach, California. Their lack of background on the plight of immigrants prompted her to do more outreach. "No one knew anything, or had an appetite to learn," she said.

Meanwhile, to understand her own faith better, Dakin-Grimm took night classes with Loyola Marymount University in Los Angeles. She emerged with a master's degree in theology, giving her a new angle for viewing immigration.

"I spent 35 years arguing cases just to win," she said. "But when it's about immigration — and fundamental issues of suffering people and children — you think in terms of what is good, what is right, what Jesus wants us to do."

Besides court actions, Dakin-Grimm has spread the word via two formats. One was a 208-page book, "Dignity & Justice: Welcoming the Stranger at Our Border," published by Orbis Books. She also developed a Zoom-friendly presentation and tried it out in July with a church in South Pasadena, California.

The session brought 85 participants on its first night, and 65 the second (with some people returning). Better, two of the listeners — one doctor and a lawyer —offered to help, she said.

She typically starts a Zoom session with questions for listeners to ask themselves. What is a human life? What does "America First" mean? Does God love a person more in Mexico or in Arizona?

Then she introduces them to Church documents, like those of popes going back to the 19th century's Leo XIII, and even medieval theologian St. Thomas Aquinas. She quotes the Bible itself as well, in both testaments. Abram, who became Abraham, heard God's call to migrate from Ur, in the current Iraq, and move to the Holy Land. Famine drove Jacob and his sons to migrate to Egypt. Still later, Moses led the Israelites out of Egypt and back home.

Dakin-Grimm's book cites at least three places in the Hebrew Bible that demand love and respect for resident aliens, "for you were aliens in the land of Egypt."

Pope Pius XII even invoked Mary and Joseph as archetypal migrants, Dakin-Grimm notes. His 1952 Exsul Familia Nazarethana — a solemn decree called an apostolic constitution — further declared a basic right of people to migrate, not only to flee persecution, but to fill basic needs to sustain life.

"They're called economic migrants, and that's a dismissive term," she said. "You can't demonize people when they're just trying to keep their families alive. And that's not me — that's the Church's teaching." 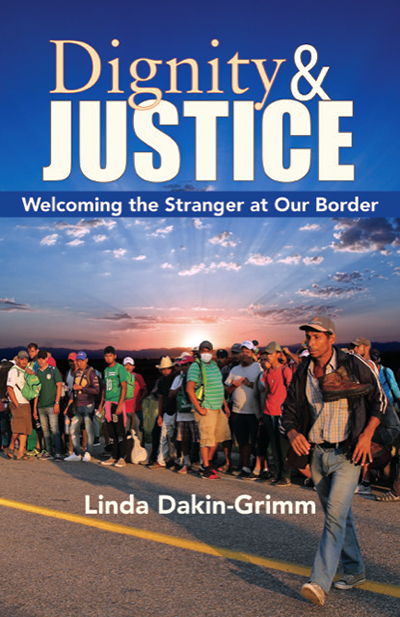 Linda Dakin-Grimm's book on the need for Catholics to welcome immigrants came in this year.

From Matthew 25, she cites Jesus' threat of "eternal punishment" for anyone who doesn't care for the needy and disadvantaged.

"I never thought of myself as a hellfire-and-brimstone preacher," Dakin-Grimm said wryly. "But this is so important — you’ve got to take life issues seriously. You don’t get to choose your opinion. This is fundamental to who we are."

Her book and presentations paint horrific pictures of poverty, corruption, abuse and murder that her clients have fled. A few items:

Even with such conditions, Dakin-Grimm said it's extraordinarily hard to get a permit to live and work long-term in the U.S. The four main routes are family connections, employer recommendations, humanitarian relief and a "diversity lottery." The latter group is a legal quirk arising out of Irish immigration in the 1980s — and a target of the current administration.

"The U.S. simply does not allow most suffering people in the world to live and work here," Dakin-Grimm said. "Not even those trying to save their lives."

Despite her zeal, Dakin-Grimm said she doesn't preach any political platform. Her goal is more basic: reminding people of their Catholic priorities.

"I don’t want people to join my team — I don’t have a team," she said. "People always ask how they can help, but I'm interested more in a mind and heart shift."

But she does add one caveat: Whatever Catholics decide must be steered by scripture and Church teachings.

"I think that if we Catholics look to our sources, instead of who we like on the political spectrum, we might find ourselves reaching different conclusions," she said. "Make your decision a reasoned, Catholic decision."

To contact Linda Dakin-Grimm for webinars and Zoom presentations, e-mail her at [email protected].