A year after Irma, Catholics in Big Pine Key glimpse the future 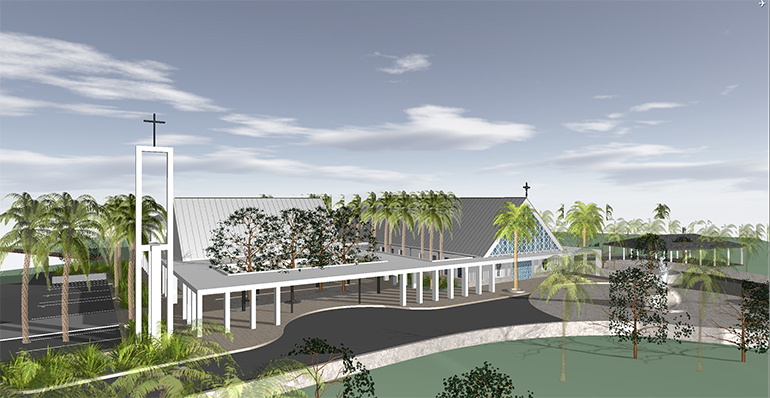 Oppenheim Architecture's rendering of the front view of the future St. Peter the Fisherman Church in Big Pine Key.

BIG PINE KEY | Rowena Garcia-Frank first moved to the Florida Keys with her husband in the 1990s, both working as environmental consultants and starting a family as members of St. Peter the Fisherman Church.

Last year, when Hurricane Irma landed a powerful blow to the Big Pine and Marathon areas, the church became a kind of ground zero for one of 2017’s most powerful Atlantic hurricanes. Irma had peak winds of 185 mph and Category 4 strength when it landed in the Florida Keys.

The area was littered with storm-related wreckage of varying degrees, setting off a chain reaction of impediments to housing and rebuilding, especially for the many local employees and retirees who call this region home.

Virtually all the parish staff and parishioners were impacted by Irma at some level. Many members of the church community have not returned to the area, especially the seasonal visitors who rented properties during the winter.

“Some people left because their house was too far gone, which is really sad, and some went to live in Key West because there was no housing to buy in Big Pine,” said Garcia-Frank, who is a member of the parish finance council lending advice on the parish rebuilding project. 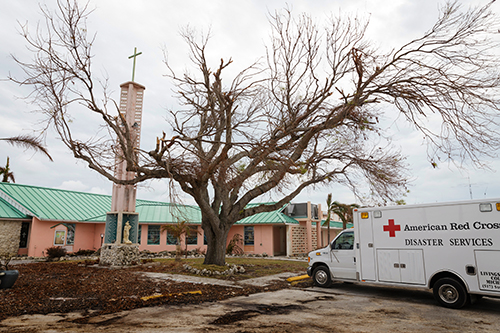 An American Red Cross vehicle is parked among the debris last year at the Miami archdiocesan church most devastated by Hurricane Irma, St. Peter the Fisherman in Big Pine Key. 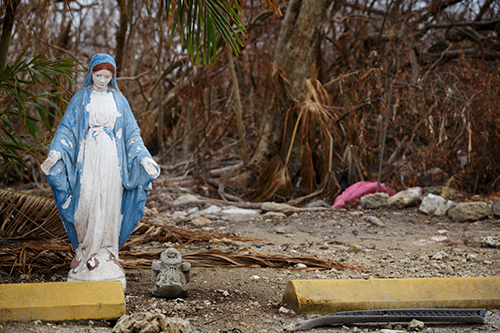 A statue of Our Lady stands among the debris at the Miami archdiocesan church most devastated by Hurricane Irma, St. Peter the Fisherman in Big Pine Key. 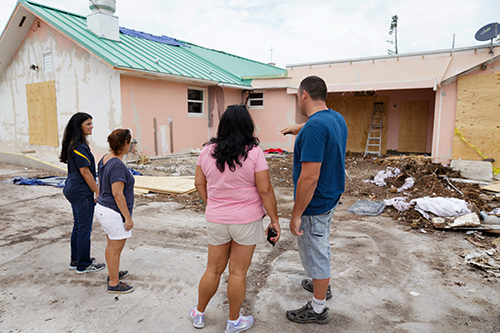 Volunteers from parishes throughout the Archdiocese of Miami inspect the grounds in September 2017 at the archdiocesan church most devastated by Hurricane Irma, St. Peter the Fisherman in Big Pine Key. The church was deemed unusable.

“Getting contractors down here was fairly difficult. Some of our winter residents didn’t come down last year or they are delaying the time frame they are coming down. It really took a toll on our parish.”

In September, parish leaders and others met with a Miami architectural firm to get a first look at the proposed rebuilding plans for a new parish campus that would replace all but one of the old buildings at St. Peter’s.

Still in the early phase of development, the plans are moving along at a swift pace and there is hope for a groundbreaking as early as the beginning of 2019, according to Father Jesus “Jets” Medina, pastor of St. Peter.

The priest was left homeless last year when Hurricane Irma ruined the rectory, and he has lived in four temporary locations in the period since.

“We lost everything practically speaking: the church, office, parish hall, food bank and the rectory house. The only thing we still have is the religious education classroom building which was built in 2007 and we are using it now,” Father Medina said.

The flooding caused by Irma rendered the old church and rectory completely unusable. Plans call for the rebuilt facility to comply with the newer, stricter storm codes, including a higher elevation to prevent water damage during storm surge.

Oppenheim Architecture of Miami was selected to design the new church and campus in a simple style, with a Florida Keys aesthetic and five feet higher than the previous church â for a total of nine feet above sea level.

“The parishioners liked the plans and we can move toward a preliminary bid from contractors and then the final builder selection will be made sometime in November or December,” Father Medina said. “We hope to do a groundbreaking in January of next year, and looking at one or probably two more years to construction of the buildings.”

When the parish detailed the criteria for a new church one of the first desires that parishioners expressed was that the architectural style reflect the Florida Keys. So the building will incorporate coral stones and window shutters that can open, like those at the Basilica of Mary, Star of the Sea in Key West.

“We also have to comply with the new building codes from Monroe County, and also with our own insurance requirements,” the priest noted. 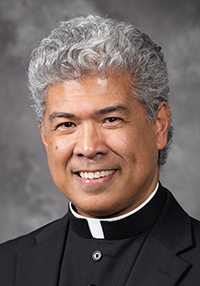 Father Jesus âJetsâ Medina, pastor of St. Peter, was left homeless last year when Hurricane Irma ruined the rectory. He has lived in four temporary locations in the period since.

Parish building, finance committees and donors are all playing a role in the development of the plans, he said, adding, “We need a lot of patience and trust in God that in time” they will get their new church.

Juan Calvo, vice president of design for Oppenheim Architecture, noted that the size and scope of the new parish campus will be very close to the old structures but with the addition of covered walkways between buildings, a covered carport drop off area and a new courtyard.

“We didn’t want to design something that is foreign or new or that would create new traditions,” Calvo said. “This is a place where families have been married, children baptized and so it needs to be familiar to people. It draws on a sense of Key West and the Caribbean with covered porches, colonnades taking you from building to building, sloped buildings in the conch house style, metal roofs, Bahamian shutters, a lot of things typical of the Caribbean architecture throughout the Keys.”

The church will be constructed largely of concrete block with painted stucco and metal roof for a total seating capacity of between 200 to 300 people. In addition, there will be a lot of symbolism: the building keystone bases will reference St. Peter as the Rock of the Church; the entry area to the church will have a pediment representing St. Peter’s net; blue stained glass will symbolize the water. Several courtyards will offer space for socialization or meditation gardens. 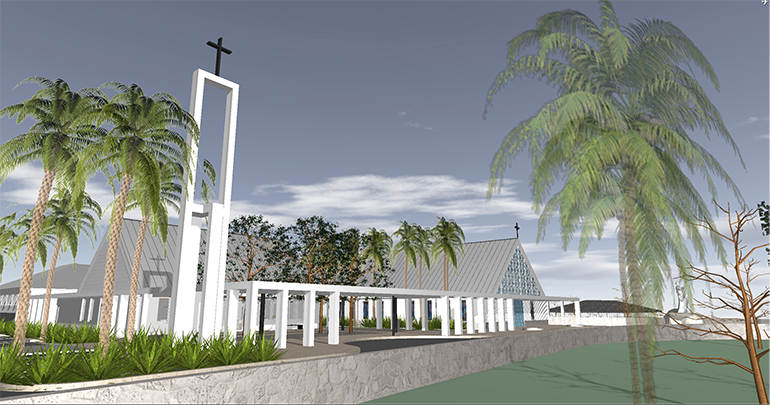 Oppenheim Architecture's rendering of the entry drive to the future St. Peter the Fisherman Church in Big Pine Key.