His kindness drew people back to church 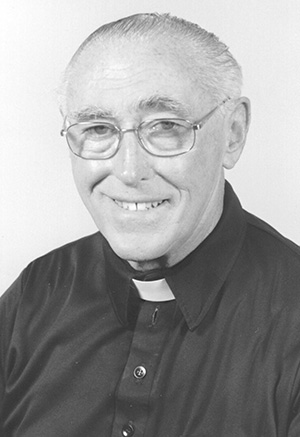 The Irish-born priest served for 27 years at St. Joseph Church, Miami Beach. And on hearing of his death on Saturday, "many people said tearfully that he had brought them back to church," said Cheryl Hodowud, his former secretary.

Father Bennett died peacefully on Saturday afternoon at his retirement condo, surrounded by friends and parishioners, six blocks from the church he served even after retirement. He had just observed his 84th birthday on Jan. 3.

"When people met him, they were drawn to him like a magnet," said Hodowud, his secretary at St. Joseph for 17 years ending with his retirement in 2003.

Christine Williamson, the assistant secretary, agreed. "He met with anybody who needed to talk. He was open to whatever the parish needed. That's why the people had such rapport with him."

Archbishop Thomas Wenski, too, paid tribute to Father Bennett: "He brought the missionary spirit and Irish charm that won him the love and devotion of his parishioners."

Born the youngest of six sons to a family in Dublin, Father Bennett showed an early flair for sports and drama. He sang as a child in a boys' choir in Dublin. As a teenager, he got into hurling and boxing. And before leaving for the novitiate at 19, he acted at the Abbey Theatre in Dublin.

He attended Christian Brothers schools, then the Seminary of the Irish Redemptorist Congregation in Cluian Mhuire, Galway, which ordained him in 1959. He also took postgraduate studies in guidance and counseling at Loyola University of Los Angeles.

He worked for a decade as a missionary with the Redemptorists, serving in Cebu City, in the Philippines. He witnessed marriages and baptized in the barrios, preaching in Cebuano and Tagalog. He also produced a weekly radio show on religion, and led missions and retreats to high schools and colleges.

Father Bennett then came to South Florida in 1970, out of a "love for the tropics," as he told a reporter. He served assistant pastorates at Holy Family in North Miami, then at St. Patrick's on Miami Beach. He was appointed to St. Joseph in June 1976 first as vicar econome, or administrator, then as pastor in December 1978.

At St. Joseph, he acted like a missionary, although its beginnings reach back to 1941. He went door to door, introducing himself and offering to help in any way he could.

"And he said he didn’t care if they were Protestant, Catholic or Jewish," Hodowud said. "It was one way he endeared himself to people."

In the pulpit at St. Joseph, Father Bennett used his Redemptorist training -- and perhaps his theater experience from Dublin as well -- to give memorable, accessible homilies. He often sprinkled them with "Irish blarney humor," as Williamson called it, and anecdotes about his family life.

"His homilies were marvelous and down to earth," she said. "He was very learned, but he always brought things down to the level of the people."

When preaching on the biblical commandment against bearing false witness, Father Bennett said, "Give two ladies a pot of tea, and God help the neighbors."

But it was confession that Father Bennett found most rewarding, his secretaries said. Rather than condemning people, Hodowud said, he actually thanked them for "having the courage to take that first step."

"People were nervous going to confession; they didn’t know what to say," she said. "Then they'd exit floating."

Among those he helped return to church was Carla Ancilli. The wife of a globe-trotting businessman, she hadn’t attended for 15 years. But in the late 1980s, after they'd settled in South Florida, she mustered her courage and went to talk to Father Bennett.

"He was wonderful," Ancilli said, choking up over the memory. "I thought I was damned. But he assured me that God was waiting for me to come back."

Ancilli did more than attend Mass: She became a volunteer, helping with the church's stewardship council and its St. Vincent De Paul Society. She was also one of those at Father Bennett's side when he died.

Father Bennett also extended mercy in smaller matters. Williamson remembered his light but firm discipline for her sons. "They said that even when he was chastising them for something they did in school, he did it with a smile."

She also experienced that mercy herself as a new church secretary, when she handled confirmands' certificates, including the name of Auxiliary Bishop Agustin Roman. She realized with horror that she had added an extra "u" to his name, calling him Augustin.

"I was scared stiff to tell Father Bennett," Williamson said. "But he just laughed and said, 'Even bishops make mistakes -- don’t worry about it.'"

His kindly nature grew a devoted following over the years. Not only Hodowud's daughter, but her two grandchildren and even her great-grandson, called him "Uncle Father." And Williamson's son Stephen not only attended St. Joseph School, but as an adult asked Father Bennett to baptize his daughter.

"It was his whole life, the parish and the school," Williamson said.

Father Bennett sometimes acted on a larger stage as well. From August 1974 to December 1978 he was assistant chancellor under Msgr. Noel Fogarty, prompting some to quip that the office had "two Noels."

For the 1987 visit of Pope John Paul II to Miami, Father Bennett headed up the transportation committee: coordinating the flow of buses and limos to the Mass site at Tamiami Park and other sites.

"Nothing moved without him," Hodowud said.

He also invited a friend, the late Cardinal Juan Landazuri Ricketts of Lima, to the papal Mass. In return, the cardinal hosted him at a Eucharistic Congress in his hometown in 1988.

He served nearly 17 years as a chaplain for the Knights of Columbus on Miami Beach and nearly two years as associate state chaplain. And he was state chaplain of the Catholic Daughters of America for more than 18 years until his retirement.

He also sought to leave a legacy when he moved out of the church rectory. As he thinned out his library, he ordered theological books to go to Saint John Vianney College Seminary in Miami; his books on preaching were to go to St. Vincent De Paul Regional Seminary in Boynton Beach.

In retirement, Father Bennett pursued a hobby of leatherworking, making belts and wallets. But he stayed involved at St. Joseph: concelebrating Mass, visiting for occasional meals with the St. Vincent De Paul Society, hearing confessions during Lent and Advent. He also taught candidates for the Rite of Christian Initiation for Adults, and he sometimes sat in on Hodowud's RCIA classes, offering helpful comments.

Father Bennett is survived by four nieces and three nephews, as well as grandnieces and grandnephews. He was the last of his brothers to pass away.

A viewing is scheduled for 6 to 10 p.m. Friday at St. Joseph, 8670 Byron Ave., with prayer service at 7:30 p.m. Funeral Mass will be at the church at 10 a.m. Saturday. Interment will be at Our Lady of Mercy Catholic Cemetery immediately following the Mass.

Gloria M Loa - 01/29/2017 09:51 AM
Dear Father Bennett your are now resting peacefully in the Hands of the Lord. You will always be remembered. Thank you for all the support given to Fr. Oscar Samiento to form our young adults group Caminando con Jesus. There were over 10 wonderful years serving God and our beloved community of St Joseph. God bless you always!

A. Frost - 01/27/2017 05:47 PM
Father Bennett was very helpful to me as a divorced mother of two children who attended St. Joseph at a reduced tutuion. He also assisted me by offering boxes of detergent and whatever else he had on hand to give away. I enjoyed meetings at the Rectory with the Bingo volunteers when he would offer an ounce of whiskey while we talked. Rest In Peace. I, and my children will never forget you. Thank you for all you did for us personally.