State-of-the-art science and arts building will be named for largest donor, Smith Family 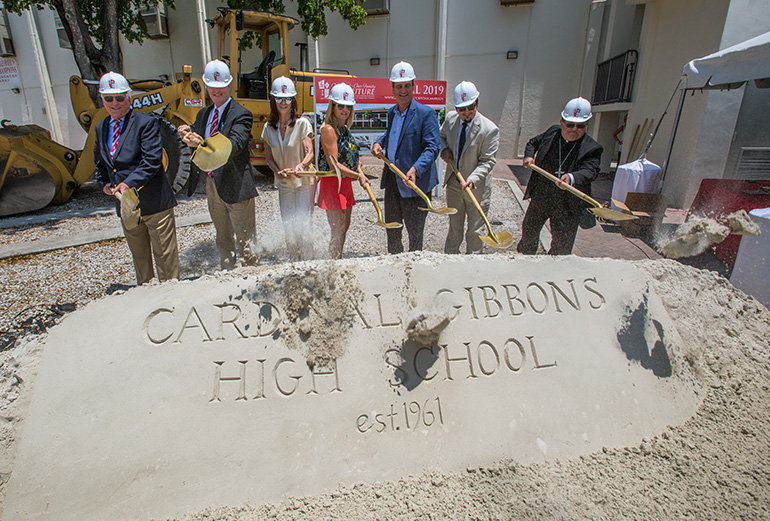 FORT LAUDERDALE | Cardinal Gibbons High School took another step toward the future with the groundbreaking for a new state-of-art STEAM building. 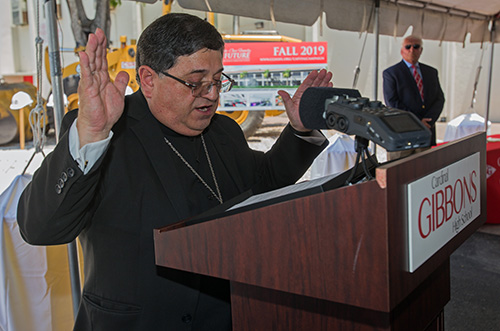 “This ceremony marks a significant re-investment in the future of this school,” said Charlie Myers, who addressed those at the groundbreaking ceremony June 4. Myers is the son-in-law of Phil Smith, whose family donated $750,000 toward the construction of the new Smith Family STEAM Center at the school.

Smith, the family patriarch, died in 2016. He ran the Phil Smith Management Company which included several automobile dealerships. The family has donated money to Holy Cross Hospital and Florida Atlantic University, Smith’s alma mater, among many others.

“Cardinal Gibbons has given my family so much, it only made sense to give back and help future students,” said Myers. 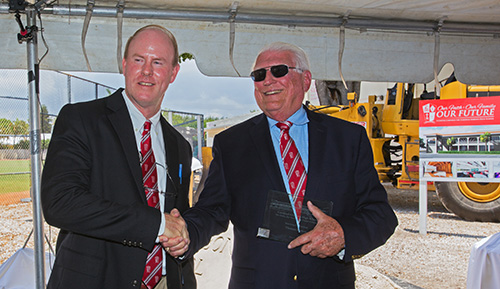 Smith’s daughter, Shawn, and two of Smith’s grandchildren, are Cardinal Gibbons alumni. The youngest grandchild will attend the school there in the future, said Susan Smith, Phil’s widow.

“My husband would have been on board with this,” said Smith. “He was very interested in education. Cardinal Gibbons High School is a down-to-earth school. I can’t say enough good things about the sigh SHichool.”

Thomas Mahon, newly appointed school president, thanked the Smith family for their leadership role in funding the project. Their donation is the largest single gift ever received by Gibbons, and will help the archdiocesan school reach its goal of raising $4.3 million for its Our Faith - Our Family - Our Future Capital Campaign. The school has raised over $3 million so far from over 60 donors.

He also thanked the campaign’s Steering Committee “for their dedicated commitment to advance the school’s educational mission” by supporting the capital campaign. “I know I speak for the entire Cardinal Gibbons High School faculty when I say how thrilled we are to be a part of this,” Mahon said. 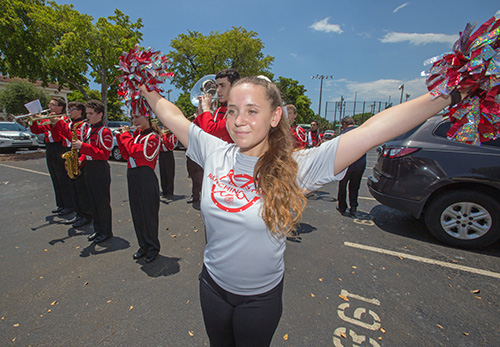 The Phil Smith Center on the 18-acre school campus will feature a “makerspace,” choral room and secondary practice space, band studio, digital music lab, Genius room and television editing and production studios as well as STEAM classrooms and labs. The courses offered will provide students the opportunity to gain hands-on experience before pursuing their chose field in college.

Cardinal Gibbons was established in 1961 in the Coral Ridge section of Fort Lauderdale. It now has 1,200 students, a 1,337-seat gymnasium, 10 academic buildings and a 300-seat chapel.

“The new 20,000 square foot STEAM center will feature improved opportunities for our faculty and department heads to advance interdisciplinary learning opportunities,” said Mahon. “The center will better prepare our students for their post-secondary education journey, and provide the added resources to meet a constantly growing and changing social and corporate landscape.”

Gibbons principal Paul Ott, a class of 1966 alumnus, said he was honored to join the celebration that will launch the initial phase of the $4.3 million STEAM building construction. Ott, who is retiring at the end of this month, was an English teacher before becoming principal in 2003 and has served the school for 48 years.

“I know that the entire Gibbons community, from alumni, current students and families, to future generations of the proud Chief nation, shares in the excitement of these transformative campus improvements,” he said.