Gibbons soccer: A miss in the mist

DELAND | Cardinal Gibbons returned to the girls soccer state finals Feb. 26. But the Chiefs lost a test of wills by inches when Jacksonville Bishop Kenny took a 2-1 victory in the Class 4A final at Spec Martin Stadium.

Both teams were seeking their first state title. Bishop Kenny’s Haynes Grant scored the winner in the 44th minute from just inside the penalty area, and the Crusaders deftly utilized an offside trap to neutralize several Chiefs chances. 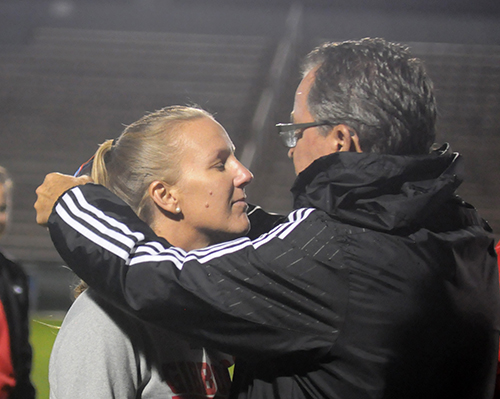 An on-and-off mist affected play, forcing players to slip and making the ball slippery. However, both teams fought through the mist.

Sydney Polivka put the Chiefs up 1-0 in the 6th minute. Gianna Mitchell found an open Polivka just inside the penalty area. Polivka whiffed on one attempt to shoot, but she recollected herself and buried the shot into the left side of the goal. “There was barely any pressure, and it was kind of an open goal,” Polivka said. “I just had to put it in.”

Cardinal Gibbons tried to feed Polivka several times with long through passes. However, just before the pass, the Bishop Kenny defenders would step up to force Polivka offside. The offside trap caught the Chiefs six times.

She said she had seen other teams do that. “That happens a lot, but it’s hard, especially as a lone striker, when you don’t have a second striker to communicate with you,” Polivka said. “I’m kind of blindsided. You have to pay attention to it.”

The Crusaders got the equalizer just before halftime. Mackenna Gregory put a free kick into the penalty area, and Sophia Hayag buried the shot into the right side of the goal to tie it 1-1.

The mist played a role in the Crusaders’ game-winner. In the 44th minute, Grant fired a high shot from just inside the penalty area, but the ball slid through the keeper’s hands into the goal to put Bishop Kenny ahead 2-1. 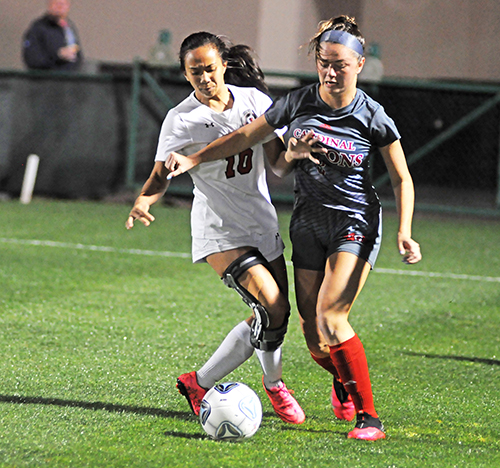 The Chiefs continued to attack but just missed on a few chances. Cardinal Gibbons’ midfield, led by captain Teagan Duenkel and midfielder Deborah Bien-Aime, tightened up and allowed the Crusaders only a few chances.

“We adjusted into a diamond in the second half to stop the attack,” said Duenkel, a senior defender. “The end of the game, we went to a three-back (formation) because time is down. I think we dominated the whole game. I wouldn’t really say we had to adjust to their attack.”

The Chiefs entered the season having to replace 12 seniors from last year’s state finalist, including Division I signees Maya Alicea and Alyssa Vasquez. Flack said this year’s edition of the Chiefs excelled because of the team mindset and work ethic.

Polivka, who scored eight goals as a freshman for that senior-laden team, returned to excel in the striker role. The sophomore striker finished with 29 goals and eight assists.

Bien-Aime also provided some two-way strength. She scored 10 goals and provided a spark in the midfield. Madison Rivard had seven goals this year. Keepers Alexis Deveaux, Harlee Shoaff and Alexis Stampone all had goals-against averages of 1.43 or better.

“That was one of our biggest worries coming into the season – that we lost these two star players,” Polivka said. “We got transfers. We got Maddie Young, who’s a UF commit. We filled in the gaps and worked well together. We figured it out.” 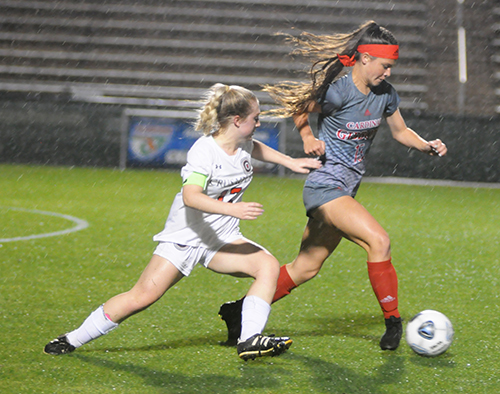 Cardinal Gibbons forward Ashley Nouss tries to break away from Bishop Kenny midfielder Gabi Iuliano during the first half of their FHSAA Class 4A girls soccer state-championship match, Feb. 26, 2020 at Spec Martin Stadium in DeLand. Bishop Kenny won the match 2-1.

The Chiefs started 4-2-2 as they filled the gaps. Flack said the team’s first goal was winning District 14-4A — a district that contained Class 3A champion Plantation American Heritage. The defending champs beat Gibbons 2-1 in the Chiefs’ second match of the season. Cardinal Gibbons got revenge in the district-tournament final, winning 3-0 on Feb. 6. Then the Chiefs beat the Patriots again 2-1 in a Region 4 semifinal. Duenkel said the Chiefs turned things around after that loss to American Heritage.

The Chiefs can also point to a tournament in California as a turning point. Cardinal Gibbons went 2-1-1 at the South Bay Invitational in San Ysidro. Then they went 11-0-1 entering the final against Bishop Kenny, including a 1-0 victory over Cypress Bay, a team that finished ninth in MaxPreps’ national poll.

“We’re like, ‘We can go through with this,’” Polivka said. “We stuck to it, kept working hard, and we got here.”

“I’m happy getting back here,” said coach Flack. “It was a tough road. I’m proud of the work the girls put in to get to the state final.”

The Chiefs, who lose seven seniors off this year’s team, return their top three scorers and all three of their goalkeepers. Flack said the returning players will be driven by the taste of their state-final loss.

Polivka said the Chiefs will learn from their mistakes. However, she also lauded her coaches.

“Our coaches deserve it the most, out of anyone,” Polivka said. “(Flack) hasn’t won a state championship. My goal by the time I’m out of high school is to get her one.” 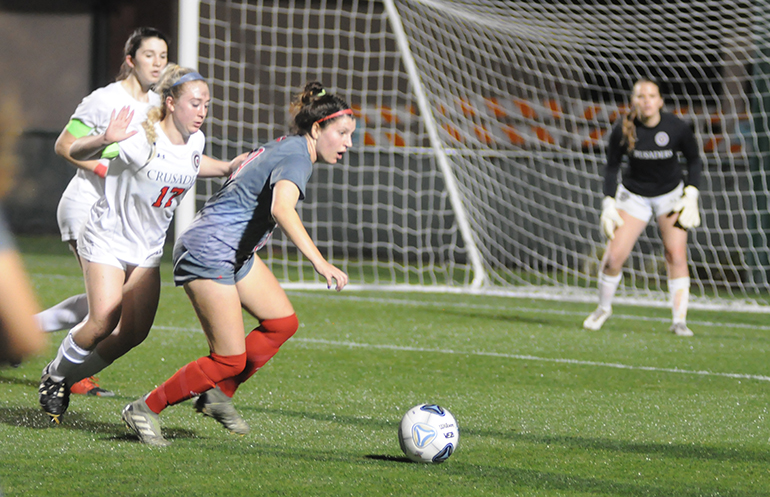 Cardinal Gibbons midfielder Gianna Mitchell, right, looks for an open player while moving away from Bishop Kenny's Gabi Iuliano during the first half of the Feb. 26, 2020 FHSAA Class 4A girls soccer state-championship match at Spec Martin Stadium in DeLand.