What are the questions asked and why were they asked?

This is the second of a two-part series regarding the Florida bishops' Candidate Questionnaire Project. Click here to read the first part.

The project involves sending any candidate and incumbent who will be on the primary and/or general ballot for the offices of state legislature and U.S. Congress a questionnaire of 10 questions highlighting issues important to the Catholic faithful. Those running for Florida state senators and representatives receive 10 questions pertinent to upcoming Florida legislative issues, and those running for U.S. House receive a questionnaire concerning federal issues. Although the project also offers questionnaires to Florida gubernatorial and U.S. senate candidates, those offices are not on the ballot for the 2020 election cycle. 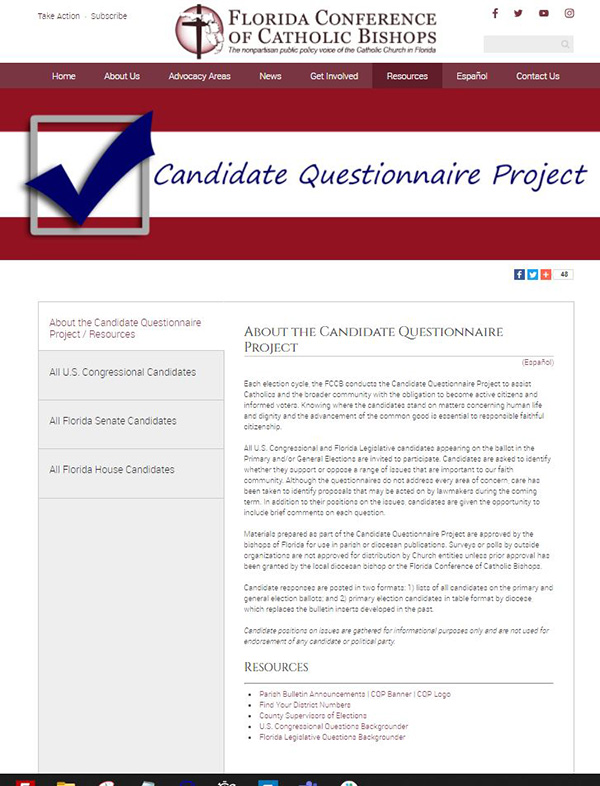 Responses to the questions were “support” or “oppose.” Those candidates who did not respond to a question either way were posted as “no response.” Candidates were afforded the opportunity to offer additional comments that describe the reasons for their “support” or “oppose” response. While support, oppose and no response are offered in a table online, viewers can click on individual names to view more extended responses.

Surveys or polls by outside organizations are not approved for distribution by Church entities unless prior approval has been granted by the local diocesan bishop or the Florida Conference of Catholic Bishops. However, it should be noted that candidate positions on issues are gathered for informational purposes only and are not used for endorsement of any candidate or political party. The following are the questions and backgrounders proposed to ballot candidates:

(Q) ABORTION LIMITS: Prohibiting abortion when a fetus has reached 20-weeks gestation and has the capacity to feel pain?

(B) Two sections of Florida statutes currently prohibit abortions in the third trimester and when a fetus is viable. Significant scientific research has observed that babies can feel pain at 20 weeks gestation or even earlier.

(B) Many Floridians do not have affordable health insurance available to them, often because they are unemployed, or because of low wages. Workers who lose their jobs must make expensive COBRA payments to keep their insurance in place, or lose coverage. According to a recent report, 1 in 4 working-age adults in Florida is without insurance in the midst of the current pandemic.

(B) The Sadowski Act of 1992 created a dedicated revenue source for the state and local housing trust funds from a 10-cent increase in doc stamps on real estate transactions. Beginning with the 2008-09 state budget, over $2 billion has been diverted into general revenue rather than appropriated to affordable housing.

(Q) CRIMINAL JUSTICE: Authorizing courts to impose a sentence less than the mandatory minimum term of imprisonment for nonviolent crimes?

(B) Judges are required to abide by mandatory minimum sentences, even if circumstances specific to an individual or the crime warrant a less stringent penalty. Providing judges a safety valve for low-level, non-violent offenses would allow them to use discretion to depart downward from mandatory minimum prison sentences under certain circumstances.

(Q) DEATH PENALTY REPEAL: Ending Florida’s use of the death penalty while preserving the alternative of a life sentence without parole?

(B) There are two possible sentences for those found guilty of first-degree murder: death and a life sentence without parole. If executions are prohibited, the alternative of life without parole will remain.

(B) Assisting in one’s suicide (“self-murder”) is considered manslaughter in Florida Law (Ch. 782.08), a second-degree felony.

(Q) FREEDOM TO SERVE: Allowing health care providers and workers the freedom to serve in accord with their conscience?

(B) Florida has historically provided conscience protections for healthcare workers within a variety of circumstances (abortion, executions, family planning, end-of-life). They are not afforded the same protections in responding to gender dysphoria and ensuring that talk-based therapies are available for those seeking to address unwanted same-sex attraction or support for chaste living.

(Q) PARENTAL EMPOWERMENT: Eliminating the requirement to attend public school the year prior to receiving a state scholarship for K-12 non-public schools?

(B) Agricultural workers are at higher risk than other workers of dying of heat-related illness. In 2020, legislation was passed to protect student athletes from heat-related injury and death.

(Q) RELIGIOUS FREEDOM: Respecting the autonomy of nonpublic schools to maintain policies that distinguish dress codes and other aspects of student life on the biological basis of sex?

(B) Non-public schools maintain dress codes and other student life/behavior policies based on the biological basis of sex. Constitutional protections regarding the free exercise of religion allow religious-based school to maintain their autonomy in regard to certain policies.

(Q) ABORTION FUNDING BAN: Maintaining the prohibition on the use of federal funds to pay for or provide insurance coverage for elective abortions?

(B) For decades, the Hyde amendment in appropriation bills has prohibited taxpayer funding of abortion, except to save the life of a mother and in very limited circumstances.

(Q) ACCESS TO HEALTH CARE: Preserving the state option for Medicaid expansion, which would allow Florida to expand coverage in the future?

(B) A provision in the Affordable Care Act allows states the option to expand Medicaid eligibility in order to extend health coverage to more low-income Americans. Under the provision, Medicaid eligibility is extended to adults up to age 64 with incomes up to 138 percent of the federal poverty level. As of January 2020, 34 states had fully adopted Medicaid expansion. Florida has not. Preserving the option would allow future participation.

(B) Many payday and car title lenders offer loans at 300% APR and higher. The Military Lending Act, approved in 2006, prohibits lenders from charging military servicemembers and families more than 36% APR. The Veterans and Consumers Fair Credit Act would extend the Military Lending Act’s interest rate cap to all Americans.

(Q) DEATH PENALTY REPEAL: Repealing the federal government’s use of the death penalty?

(B) The federal death penalty is frequently employed in cases where a conviction and death sentence could have been pursued in state courts. A number of federal cases resulting in death sentences were prosecuted in states that have abolished the death penalty. After a 17-year hiatus, three federal death row inmates were put to death in July 2020, and two more were executed in August 2020.

(B) The cost of renewable energy is now competitive with oil, coal and gas-fired plants when that power is being generated by “new” power plants. Federal investment may help to supplant existing fossil fuel plants in favor of new renewable plants, reducing carbon emissions.

(B) While many factors are involved in gun violence, firearms easily find their way into the hands of those who use them to harm others. While respecting Second Amendment rights, universal background checks may help to limit firearm access to those who may be less prone to harm others.

(Q) HUMAN SEXUALITY: Maintaining currently protected classes of individuals without adding new ones based on “sexual orientation” and “gender identity”?

(B) Traditionally protected classes are based on readily observable criteria and/or a long constitutional history (religion, race, sex, age, color, creed, disability). There have been and remain proposals to expand class protections to include “sexual orientation” and “gender identity” in federal antidiscrimination laws.

(Q) IMMIGRATION: Achieving comprehensive reforms that offer a path to citizenship for the undocumented who live in the U.S. and do not have a criminal record, expand family reunification and worker visas, secure our borders, and establish humane enforcement?

(B) There have been proposals to amend our current immigration policies to ensure an adequate supply of labor, promote greater family stability, enhance public safety, recognize more clearly the right to migrate, and to enhance respect for human dignity.

(B) At present, 17 states, including Florida, have some form of tax credit scholarship program. Eligibility requirements vary and most programs are means tested. Funds are generated by donations freely made by individuals or businesses to scholarship granting organizations approved by respective states. Donors would receive federal tax credits.

Bertha Pallin - 09/24/2020 10:49 AM
I am very disappointed to see that the socialists/Marxist ideology that is running around our country at this very moment are not been addressed by you. I am sure that we’ll know that in a socialist/Marxist country the first thing that goes out is the freedom of religion. Today I still remember with a sad heart how my church and catholic school was destroyed by the communists in Cuba. God bless America and illuminate you and help you to see the truth of what is going in America right now