Find out where state, federal candidates stand on issues of importance to Catholics

ORLANDO | Although 2020 has been a year of surprises and what’s next, one project is predictably — and thankfully — available for all of Florida’s voters. 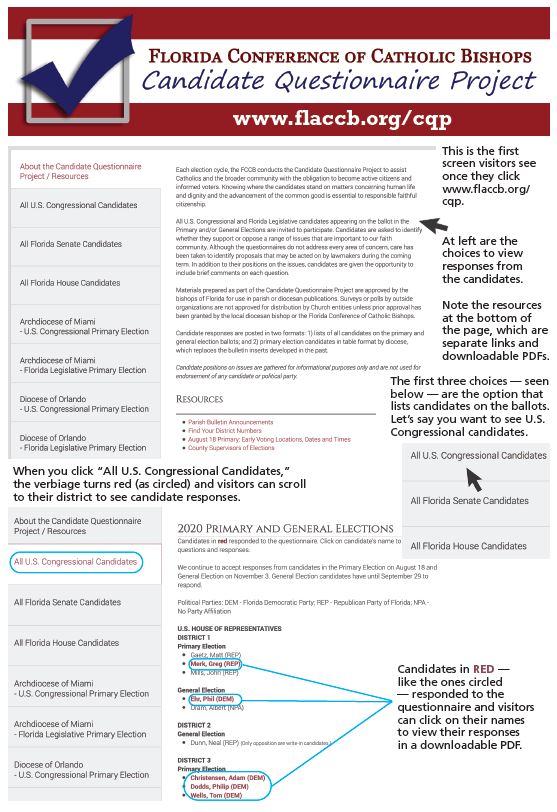 For more than two decades, the conference has conducted the CQP each election cycle to assist Catholics and the broader community with the obligation to become active citizens and informed voters. Knowing where the candidates stand on key issues concerning human life and dignity and the advancement of the common good is essential to responsible faithful citizenship, the conference stated.

“Catholic faithful are called to political engagement shaped by the moral convictions of well-formed consciences and focused on the dignity of every human being, the pursuit of the common good, and the protection of the weak and the vulnerable,” the conference stated in a bulletin announcement sent to all Catholic parishes.

The Florida Catholic statewide edition is offering the following information about the CQP for its readers. The second part of this article will be published next month. For further information, visit www.flaccb.org/cqp.

What is the CQP?

The conference, the lobbying arm of for Florida’s bishops, develops questionnaires and invites all U.S. congressional and Florida legislative candidates appearing on the ballot in the primary and/or general elections to participate. Candidates are asked to identify whether they support or oppose a range of issues that are important to the faith community, especially on proposals that may be acted on by lawmakers during the coming term. In addition to their positions on the issues, candidates are given the opportunity to include brief comments on each question.

How is CQP different from other questionnaires?

Materials prepared as part of the Candidate Questionnaire Project are approved by Florida’s bishops for use in parish or diocesan publications. Surveys or polls by outside organizations are not approved for distribution by Church entities unless prior approval has been granted by the local diocesan bishop or the Florida Conference of Catholic Bishops. However, it should be noted candidate positions on issues are gathered for informational purposes only and are not used for endorsement of any candidate or political party.

Are all the candidates listed?

If a candidate is listed on a Florida ballot, that candidate was invited to participate. However, if candidates opted to not answer the questionnaire, they are still listed in the table of responses with each response marked as “NR” — “no response.” Please note, this election cycle does not include an election for U.S. senator, whose terms run six years, or Florida governor.

Where are the results?

Everything anyone needs to gather from the CQP is conveniently located at the website for the Florida Conference of Catholic Bishops — www.flaccb.org/cqp. A step by step tutorial is available on this page, along with live links. The website offers links to finding district numbers across the state and to all the county supervisors of elections. There is also a downloadable pdf of early voting locations, dates and times for Florida’s Aug. 18 primary election.

Candidate responses are posted in two formats. The first option lists of all candidates on the primary and general election ballots — which are generated when a website user presses the buttons marked — “All congressional candidates,” “All Florida senate candidates” and “All Florida house candidates. Candidates are listed in two colors — black and red. Those marked in red have answered the questionnaire and viewers can see the responses. When visitors click a candidate in red, a downloadable PDF lists the questions and responses, along with any text candidates were afforded to include about why they responded as they did.

The other option is to see primary election candidates in a table format by diocese. The responses from the candidates are delineated in easy-to-follow tables that are separated by district number (see example this page). Again, candidate in red are those who answered the questionnaire. Their names are also a link to the same downloadable PDF listed above.

The table format by diocese available online at www.flaccb.org/cqp replaces the bulletin inserts developed in the past. This allows the project to be available to voters at their convenience and for voters to have access to the most current information and any recently received candidate responses. This format was also adopted in light of the coronavirus, during which Florida dioceses have asked parishes to go paperless, in terms of missalettes, bulletins, prayer cards, etc.

What are the questions?

The legislative (state) questionnaire is as followed. The 10 questions are listed in alphabetical order:

The congressional (federal) questionnaire is as followed. The 10 questions are listed in alphabetical order:

Why are there different questions for state and federal candidates?

State representatives and state senators have different proposals that come across their desk than those who hold seats for the U.S. House and the U.S. Senate. While both sets of questions might cover similar topics — such as education, capital punishment, healthcare and abortion — the questions are worded differently as they take into account specific legislation the different governmental officials will encounter.

Will there be any information posted in Spanish?

Visit www.flaccb.org/cqp-espanol see the site translated in Spanish. Visitors will have equal access to candidate responses (which will be in English) and a listing of all the questions in Spanish.

What are dates I should mark on my calendar?

An important website to bookmark — along with www.flaccb.org/cqp — is the Florida Division of Elections at https://dos.myflorida.com/elections/for-voters/election-dates/. Visitors can find a variety of information. Some highlights include: