Father John McLaughlin, 79: ‘He knew how to touch your heart’ 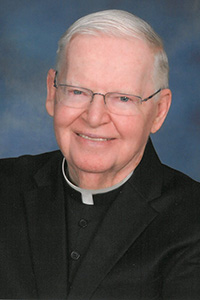 MIAMI | Running into Blessed Sacrament Church one evening to catch the last Mass of the weekend, Susan Schulz met Father John McLaughlin. He assured her she wasn’t late. And where are you from? he asked.

They got to talking. She remembers thinking, “I really like this guy. This is a really cool priest. And two weeks later I was signing up at the parish.”

Schulz, who at the time worked for the city of Oakland Park, wound up volunteering for Father McLaughlin for the next 24 years, mostly doing secretarial chores and helping him plan events for the archdiocese’s retired priests. After he underwent open heart surgery, he asked her to be his health care surrogate.

“He said, ‘I need someone I can trust.’ And I said, ‘You got it’,” recalled Schulz. “I’m his friend and then his health care surrogate, but mainly I’m his friend.”

Father McLaughlin, 79, died June 14 after several years of declining health. He had been a priest of the Archdiocese of Miami for 51 years, during which he served as pastor at two parishes â St. Martha in Miami Shores and Blessed Sacrament in Oakland Park. At St. Martha, he was privileged to welcome the visits of two eventual saints: Mother Teresa and Pope John Paul II.

Schulz described Father McLaughlin as a “gentle, humble man” who loved having fun and interacting with people. “He knew how to touch your heart and relate to what was going on in your life; and letting you know how much God loved you and that we are people of hope. Hope was his big word. We always have hope.”

She recalled his way of introducing himself to strangers.

“When he didn’t know somebody he would walk up to them and that’s how he always would start a conversation: Where are you from? We got some very strange answers sometimes but it broke the ice all the time,” Schulz said. “Can you imagine how busy that man is in heaven right now? How many people he is going to meet and ask, where are you from? He’s going to be a very busy priest in heaven.” 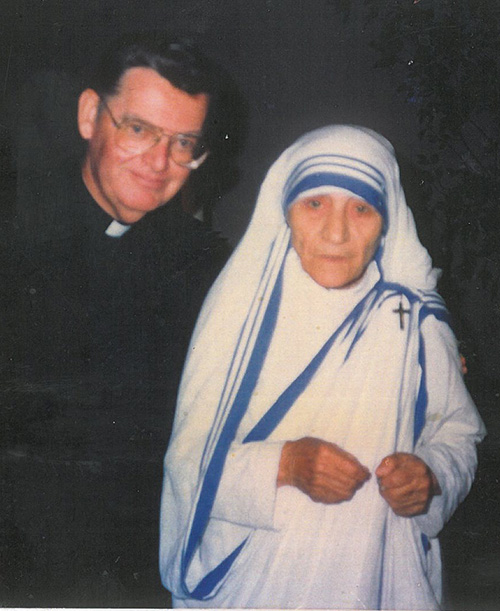 Father John McLaughlin poses with Mother Teresa during her visit to St. Martha Church in 1986.

An only child, Father McLaughlin was born Jan. 9, 1938, in Quincy, Mass., to Irish-born John and Boston-born Helen McLaughlin. A year later, the family moved to West Palm Beach, where he attended Holy Name Church and St. Ann elementary and high school. After high school, he entered St. Thomas Seminary in Bloomfield, Conn. He completed his seminary education at St. John’s Seminary in Boston and was ordained for the Archdiocese of Miami May 14, 1966 at St. Mary Cathedral.

His first assignment was as parochial vicar at Immaculate Conception, Hialeah, followed by stints at St. Monica in Opa-Locka, Annunciation in West Hollywood, and Nativity in Hollywood. During those years, he also served as spiritual director at Msgr. Edward Pace High School, Miami Gardens, and Madonna Academy (since merged with Chaminade High School) in West Hollywood.

In 1973, he was appointed assistant supervising principal at St. Thomas Aquinas High School in Fort Lauderdale. Two years later, he became principal of Mary Immaculate High School in Key West (now closed), and parochial vicar at the now Basilica of St. Mary Star of the Sea.

He then served as parochial vicar at St. Patrick, Miami Beach, until July 1978, when he was named pastor of St. Martha. At the time, the church was housed in the converted Bikini Motel, on the 114th block of Biscayne Boulevard.

Father McLaughlin oversaw the construction of the new St. Martha about 20 blocks south, next door to the archdiocesan Pastoral Center. Both were dedicated in April 1983.

Father McLaughlin remained at St. Martha until June 1993, when he was named pastor of Blessed Sacrament. He served there 10 years, until retiring from fulltime ministry in July 2003.

That’s when he took up two volunteer ministries that brought him much joy. One was serving as a chaplain on cruise ships, which he described as “almost like a church at sea, a floating church with a pastor.”

His duties included celebrating Mass and being available for the Catholic passengers and crew. He told the Florida Catholic in 2013 that he would tell them: “If you have been away from church a long time and you want to talk I will be sitting on the deckâ¦ A lot of people haven’t been to confession in a long time and I tell them you will never see me again. They can achieve something there that they maybe wouldn’t at home.”

When on land, Father McLaughlin volunteered for the less glamorous but equally important ministry to seafarers at Port Everglades, tending to the spiritual and sometimes physical needs of those who work on the cruise and cargo ships.

The other ministry he was passionate about was the ministry to retired priests.

“There’s nothing worse than for a retired priest to feel alone,” Father McLaughlin told the Florida Catholic in 2005. “He needs to feel that we care about him.”

With Schulz’s help, he rounded-up their names and contact information and strived to stay in touch.

“He fully believed in the fraternity of the priesthood,” said Schulz, noting that many priests, when they retire, “are forgotten.” The ministry organized luncheons to bring them together, “and they’d chit-chat, priest to priest. He always cherished that.”

The funeral Mass will be celebrated Tuesday, June 20, at 10 a.m. at St. Martha, 9221 Biscayne Blvd., Miami. Burial will follow at Our Lady Queen of Heaven Cemetery in North Lauderdale.

Father McLaughlin is survived by cousins living in the Boston area and in Donegal, Ireland.

Father McLaughlin asked that donations in his name be made to the Archdiocesan Seminary Burse Fund for the education of future priests. Donations may be mailed to St. Gabriel Catholic Church, 731 North Ocean Boulevard, Pompano Beach, FL 33062.

Mary T - 06/19/2017 10:42 AM
Fr John came to Donegal as much as he could to meet all his Irish cousins and he celebrated mass here many times. One at his aunt Graces 80th birthday celebrations (my grandmother) he also married his cousin Margaret (my aunt) and my sister Elizabeth and also married my brother Patrick in Cleveland Ohio. we all have great memories of Fr John coming to Donegal and we loved his sense of humour and his laid back manner. R.I.P Fr John. Mary T Mc Laughlin

Mark Kerney - 06/16/2017 05:39 PM
As an altar server for him at Nativity, I never imagined that we would both be assigned to Key West many years later. Father John at Our Lady Star of Sea and I in the Coast Guard. We became good friends and shared a lot of good times sipping our drinks while watching the many characters stroll back and forth along Duval street. Eventually he was assigned to St. Patrick's on Miami Beach for a short while and I was shipped out to California. We re-connected many years later through a mutual friend from St. Martha's and resumed our friendship. He asked me to help him with reconstructing the air conditioning system at Blessed Sacrament and then he invited my family as his guests of honor at the Blessed Sacrament St. Patrick's day celebration. You just can't refuse him when he asks for help so my wife and I joined with him and Susan to help with the retired priests ministry. All of my interactions with him since childhood have been a blessing to me and my family. I am so grateful to have been counted among his friends. My thanks to Susan for all of her efforts to support him over the years. I will surely miss him but I am looking forward to catching up with him if and when I get to heaven!

TIMOTHY SULLIVAN SR. - 06/16/2017 08:06 AM
FR. JOHN MCGLAUGHLIN WAS A PRIEST FIRST AND FRIEND OF CLOSE TO 51 YEARS. HE WAS A DEACON AT SAINT LAWRENCE WHEN THE MASS OF ALL TIME WAS STILL BEING SAID,THE TRADITIONAL LATIN MASS ,BECAUSE I WAS AN ALTAR BOY THERE AND SERVED FOR HIM AND THE PRIEST THERE AT THE TIME.HE MARRIED MY WIFE AND I, AND BAPTIZED MY 7 CHILDREN. HE COUNSELLED ME IN HIGH SCHOOL AT MSGR. PACE HIGH AND THROUGH OUT MY MARRIED LIFE. HE WILL SORELY BE MISSED. I AM THANKFUL TO SUSAN SCHULZ FOR HELPING HIM DURING HIS LAST DAYS. MAY GOD BLESS HIM AND HIS FAMILY.

Diane Milone - 06/15/2017 09:08 PM
I was a member pf St Martha's from day one, Padre was dearly loved for the 16 years he was our Pastor. One of my favorite memories was walking into the Church construction site with Father and Father Tom Bourque TOR one Sunday from the south side and running into Archbishop McCarthy coming from the north. I got a great guided tour. We also had the honor of hosting Pope John Paul during his visit. Father John made sure that all his long time parishioners had a job to do and had a close up encounter with the Pope. He will be missed. But I'm sure he is with all our friends and relatives that he buried including my Mother and Grandmother. Thank you Susan for taking such wonderful care of Padre for all of us.