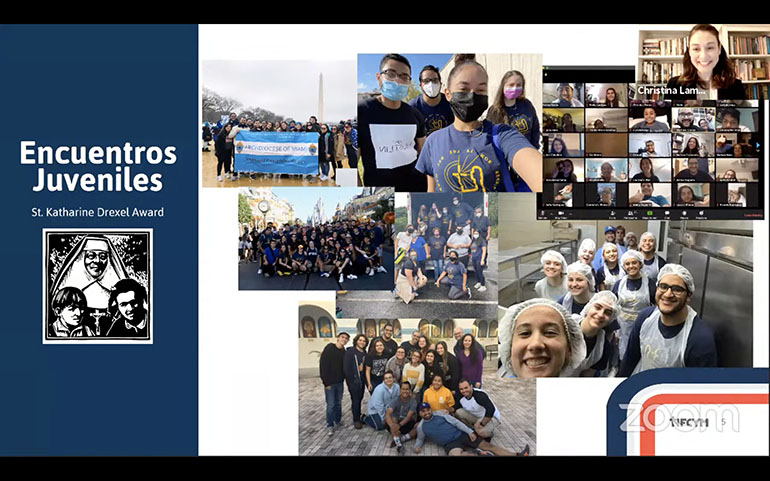 In February 2021, Encuentros Juveniles, an archdiocesan youth movement for people ages 14-25, was recognized by the National Federation for Catholic Youth Ministry, and received the St. Katharine Drexel Pathway Award.

MIAMI | Encuentros Juveniles has been “innovating” youth ministry in the Archdiocese of Miami since 1973. And nothing in recent memory has called for more innovation than the pandemic of COVID-19.

So it shouldn’t have been a surprise when the work of Encuentros Juveniles was recognized this past February by the National Federation for Catholic Youth Ministry, which gave Encuentros its St. Katharine Drexel Pathway Award for “their significant and outstanding contributions to the field of Catholic youth ministry.”

“They really exemplify a ministry that has continuously served the youth of the archdiocese,” said Rosemarie Banich, archdiocesan director of the Office of Evangelization and Parish Life, who nominated Encuentros Juveniles for the award. 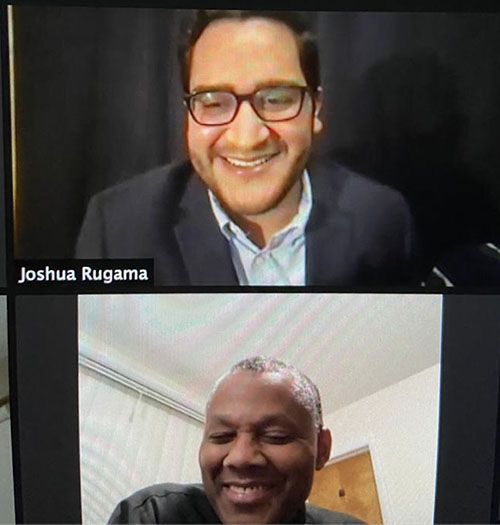 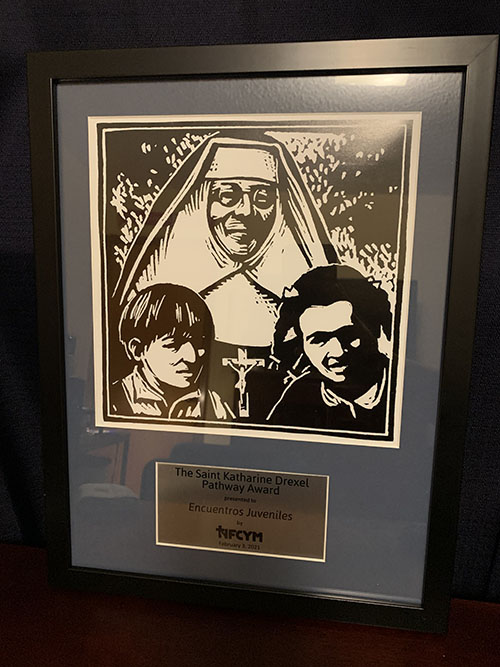 In February 2021, Encuentros Juveniles, an archdiocesan youth movement for people ages 14-25, was recognized by the National Federation for Catholic Youth Ministry, and received the St. Katharine Drexel Pathway Award.

“2020 was a year of true innovation in youth ministry,” said Christina Lamas, executive director of the youth ministry federation in a press release. “It is a joy to recognize those who continue to find new ways to walk alongside youth as they encounter and follow Jesus Christ.”

Still, the award came as a surprise. But also a blessing, and a humble reminder that Encuentros is not only doing something right, but that they must carry on.

It’s “a huge deal,” said Joshua Rugama, 24, coordinator of Encuentros Juveniles. “We don’t do this for any type of recognition, but just to know that we are doing something good, especially during this time, was a big thing for everyone. And I think it’s continuing to motivate everyone, too.”

For 48 years now, Encuentros has helped teens and young adults ages 14-25 to deepen their Catholic faith through retreats, weekly formation meetings, and monthly service projects. During the pandemic year of 2020, they learned how to do it all online.

During Lent, for example, Encuentros encouraged members and Instagram followers to participate in 40 Acts of Kindness, taking on a daily act such as praying for a person in need, donating to a favorite charity, or spontaneously complimenting someone.

In January 2021, after a discussion on the dignity of life tied to the annual March for Life in Washington, D.C., which Encuentristas usually attend, the movement decided to do a spiritual adoption.

“Nine months from now, we’re going to be collecting items for pregnancy centers around the archdiocese,” said Maria Beauchamp, 23, the “asesora general” (general adviser) of Encuentros Juveniles. “With the pandemic, it’s been hard, but we’ve been very creative.”

She admitted it was hard to ask members and supporters to donate during a year when finances have been so insecure. But Encuentros still received plenty of donations from the community and schools, both Catholic and public, for their annual Thanksgiving food drive — which feeds about 100 families — and Christmas toy drive.

“We donated to pantries. I’m not sure how many families, but we were able to help a lot of people. With the toy drive, we put a link on social media leading people to Amazon. We actually received more toys than we usually do. It was awesome,” said Rugama.

Encuentros Juveniles is one of the few archdiocesan-wide movements that has been around long enough to be considered generational. For some current members, this was the youth movement of their grandparents and parents.

At an Encuentros retreat, “you’re kind of shifting from what your parents showed you in terms of formation, to really calling it your own,” said Rugama, who attended his retreat in 2013 when he was 16.

A friend invited him to experience the movement, and although he made the retreat, he didn’t think he was going to stick around — until he started attending Monday night meetings.

“It was different from other youth groups I had seen. Obviously, we’re a movement, and not a youth group, but in the sense of the talks, we were much different, and geared towards preparing for our futures and being leaders, which I really liked,” said Rugama.

He became a leader and an “asesor” of the “celula” (small group), then was put in charge of retreats, and now serves as coordinator of the movement. By day, he is a teacher at Somerset Gables, has a master’s in educational leadership fromSt. Thomas University, and hopes to one day be a principal. He credits Encuentros for helping him push outside the limits of his comfort zone.

“That’s what Encuentros is and that’s its mission: to form leaders for the parishes, but also for the community, for professional life, and so on,” said Rugama.

Beauchamp agrees. “Whether it’s leading a retreat, a talk, or the roles I’ve had, Encuentros has really helped me come out of my shell and helped me be a confident Catholic leader,” she said. 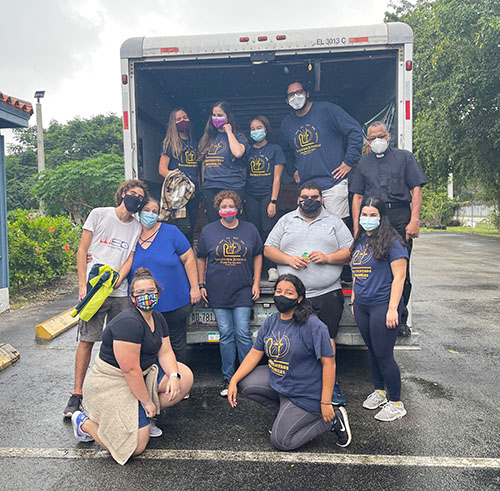 A U-Haul's fill of food: In November 2020, members of Encuentros Juveniles filled a U-Haul with donations for a Thanksgiving food drive to feed hungry families. In February 2021, the archdiocesan youth movement, for people ages 14-25, was recognized by the National Federation for Catholic Youth Ministry, and received the St. Katharine Drexel Pathway Award.

She credits her parents for establishing the foundation of her faith. She added that while attending Our Lady of Lourdes Academy helped her grow in the faith, “Encuentros solidified it for me.”

Beauchamp had just graduated from Lourdes when a friend invited her to the movement. “I had gone to Catholic school my whole life, and I was trying to figure out what I was going to do now that I didn’t have that constant source of learning and growing in my faith,” she said.

She attended Florida State University in Tallahassee freshman year, but returned home to Miami once a month, arranging her schedule to attend the Monday night gatherings at Encuentros, and then head back to school on Tuesdays. The following year, she transferred to FIU, “and I haven’t missed a Monday night since 2017.”

As the “asesora general,” she is tasked with ensuring that the spiritual needs of the members are met. To do so, the movement also calls upon a combination of parent sponsors, usually former Encuentristas, and a spiritual director who is usually a priest.

“Obviously, it’s run by us, but we do need that guidance, and we get it from them,” said Beauchamp.

Father J. Sterling Laurent has served Encuentros Juveniles since 2014. In addition to being a chaplain at Mercy Hospital and a priest at St. Kieran Church, Father Laurent joins the young people for Monday night meetings, retreats, group socials, and trips.

“I like to say that they don’t stop, because they don’t stop. They keep everyone who is associated with them busy. It’s a good thing, in a sense,” said Father Laurent.

He marvels, as do the parents, at the Encuentristas’ level of commitment to the faith. “We always say, including me, that we learn more from them than we give to them,” he added.

You will probably never hear Encuentros Juveniles change their name to Youth Encounters. Although English predominates at meetings, for generations they have held on to their Spanish-speaking roots.

“We’re more bilingual in English than Spanish, but we were completely in Spanish when we started in 1973,” said Beauchamp. 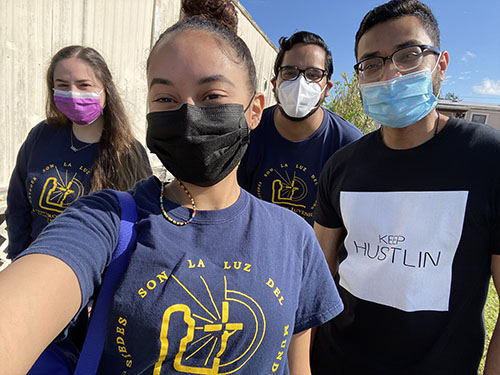 After delivering toys to a community in Homestead, members of Encuentros Juveniles stop for a selfie. From left: Maria Beauchamp, Clarelicia Vega, Joshua Rugama and Eduardo Calvo. In February 2021, the archdiocesan youth movement, for people ages 14-25, was recognized by the National Federation for Catholic Youth Ministry, and received the St. Katharine Drexel Pathway Award.

As the baton passed from predominantly Spanish-speaking immigrants to their U.S.-born offspring, Encuentros Juveniles shifted from speaking mostly Spanish at retreats and meetings to speaking mostly English — or Spanglish. However, Encuentros’ key terminology continues to be in Spanish — such as VJA, short for “Ver, Juzgar, Actuar” (look, judge, act), “celulas de evangelizacion” (small evangelization groups), and “jefes y asesores” (leaders and advisors). But if a participant or guest speaker only speaks Spanish, entire conversations and presentations will shift to Spanish.

Finding a community of young people who are striving to get to know God and form themselves in the faith while mixing languages is a sign of how Encuentros Juveniles has evolved with the times. Even during a pandemic, when they have not been able to go out and recruit new members, word still spreads, and they average between 30 and 40 participants on Zoom meetings.

Like so many, though, they are ready to leave Zoom and meet in person.

“I’m looking forward to seeing everyone. I know that I can’t give them a hug, but I just want to see everyone, and meet the new people that have joined us through Zoom,” said Beauchamp.

When the all-clear is given, Encuentros plans to continue on Zoom for those who are not comfortable meeting in-person.

“It’s been a year [since the pandemic started] and we do need to start looking at the future of the movement,” said Rugama. “We are praying and hoping that this movement stays strong.”

Beauchamp agreed. “We need to continue to be [Christ’s] hands and feet. And we’re doing what we can to build the civilization of love.”