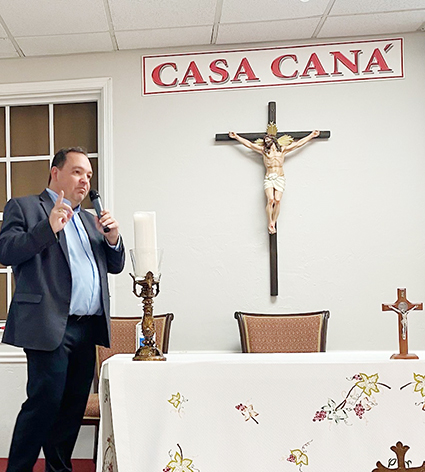 Deacon Juan Gonzalez, new spiritual director of the Movimiento Familiar Cristiano, speaks to participants at the Mass marking the reopening of in-person activities at the movement's headquarters, Casa Cana in Hialeah. The Mass was celebrated Nov. 20, 2021. 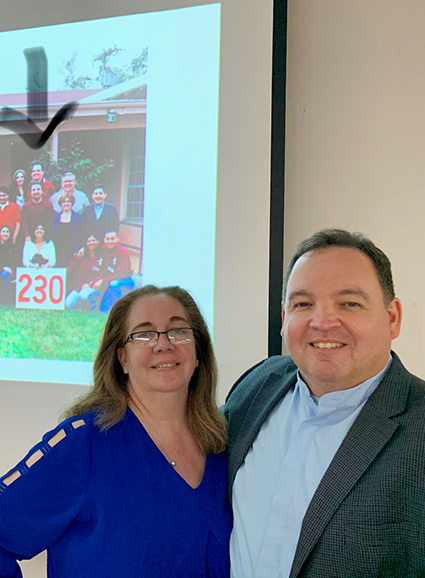 MIAMI | Deacon Juan González has been appointed by Archbishop Thomas Wenski as the new spiritual director of Movimiento Familiar Cristiano.

The appointment became official during a Mass at the end of November 2021 also marking the restart of the movement's activities at its headquarters, Casa Caná in Hialeah.

Deacon González accepted the assignment after receiving an invitation from Rafael and Stella Núñez, presidents of the movement, and the other couples that constitute its board of directors.

"After a process of discernment and prayer, I thought the Lord was calling me for this," said Deacon González, a member of Our Lady of the Lakes Parish in Miami Lakes.

Deacon González and his wife, Lizbel González-Almeda, attended Movimiento Familiar Cristiano’s Encuentro Conyugal (Marriage Encounter) in 2006 and participated in several of the movement's activities while continuing to work in Cursillos de Cristiandad.

Deacon González said he wishes to continue supporting the movement and "work on the spiritual accompaniment of the couples who are members of the board so that they can continue their work." He also noted that the movement may expand in the future by presenting talks and retreats in English.

Movimiento Familiar Cristiano is a family ministry that offers spiritual retreats for couples who want to improve their marital relationship. It was founded by the late Franciscan Father Angel Villaronga in Miami in 1963.

"The objective is to strengthen the marriage as the core unit, and then everything that has to do with marriage, which of course, are the children," Núñez explained. He added that Encuentros Conyugales is the main retreat, but the movement also offers support groups, marriage workshops, and opportunities for the whole family to strengthen the relationship between parents and children.

The retreats "provide these families with the necessary religious formation so that they not only remain as couples, but that they remain in the faith of our Catholic Church as well," said Núñez.

The movement also hosts retreats for Advent and Lent, Marian retreats, and a series of worship events to promote and encourage families to enter into prayer, which is part of the religious formation.

The movement's face-to-face activities resumed with the Advent retreat, which took place Dec. 4, 2021.

The movement’s social component includes events where couples can relax, such as dinners for sweethearts, dances for couples, and picnics.

"During the pandemic, some meetings were held online, by Zoom, but now we are returning to face-to-face meetings, maintaining the guidelines of social distancing to avoid transmission," said Núñez.

Upcoming events of Movimiento Familiar Cristiano (all in Spanish):