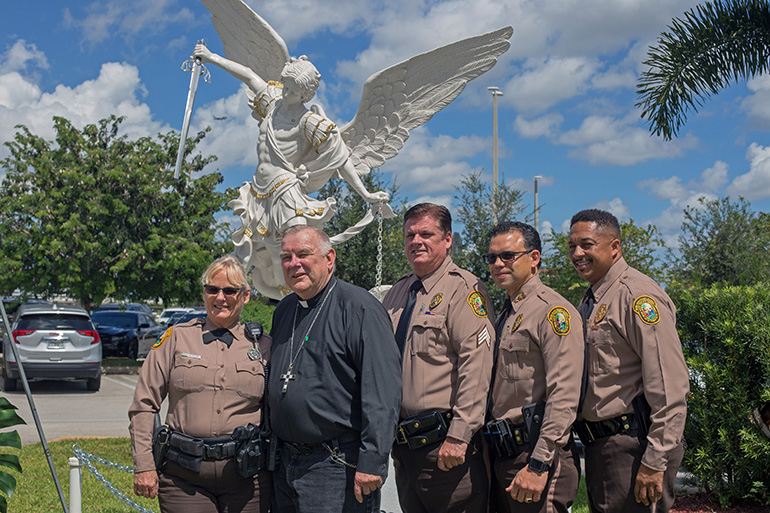 Posing for a photo in front of the St. Michael the Archangel statue at Our Lady of Guadalupe Church in Doral, after the celebration of the Blue Mass, from left: Miami-Dade Police Officer Mary Stahl; Archbishop Thomas Wenski; Steadman Stahl, president of the South Florida Police Benevolent Association; Alfredo Ramirez, deputy director of the Miami-Dade Police Dept.; and Miami-Dade Police Lt. John Jenkins. 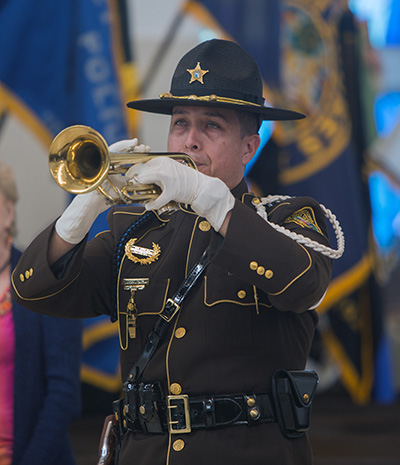 Miami Dade police officer Eduardo Gaitan, an honor guard member, plays the trumpet before the start of the Blue Mass at Our Lady of Guadalupe Church in Doral. 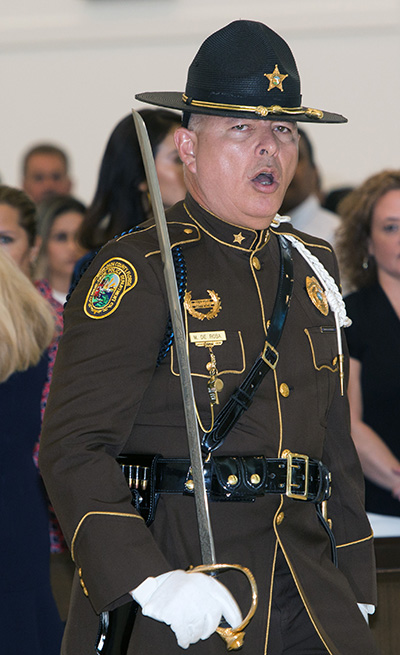 Miami Dade Police Officer Marcos DeRosa, an honor guard member, calls out orders to fellow officers carrying the flags of their various police departments as they process into Our Lady of Guadalupe Church for the Blue Mass. 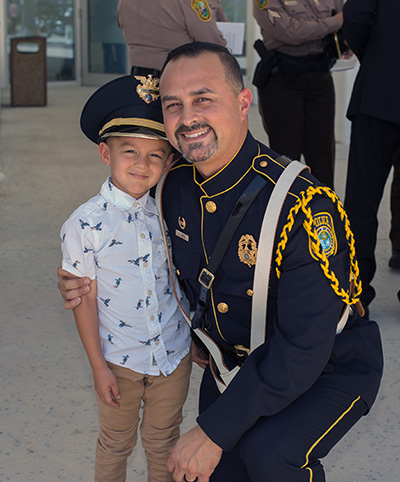 Jeronimo Lopez, 4, poses for a photo with his father, Cristian Lopez, a Medley police officer and police honor guard member, after the celebration of the Blue Mass.

DORAL | You are like guardian angels, Archbishop Thomas Wenski told police officers gathered for the 17th annual Blue Mass, celebrated at Our Lady of Guadalupe Church in Doral Sept. 27.

These nationwide Masses are called Blue Masses because they honor the men and women in blue, the more frequent color of the uniforms of police and other first responders, the archbishop said. “But regardless of the color of your uniform, we honor all of you and your comrades, for your service and your sacrifice. We thank you, for your commitment to the common good.”

The archbishop recalled the “more than 30 law enforcement professionals” who died in the line of duty across the U.S. in the past year. “We remember them and their loved ones in this Mass as well.”

Before Mass, police honor guard members placed a wreath in front of a statue of St. Michael the Angel located outside the church. The honor guard members marched in formation carrying the flags of their various departments as they processed into church. Several officers acted as altar servers at the Mass and two brought up the offertory gifts.

In a speech to those gathered for the Blue Mass, retired Sunny Isles Police Chief Fred Maas talked about what makes a police department work.

Many police officers have sacrificed their lives for others, he said. Maas told the story of St. Maximilian Kolbe, a priest who gave up his life in place of a soldier while in a Nazi concentration camp during World War II.

“He was incarcerated with the soldier, who was about to be executed,” Maas said. “St. Maximilian knew the soldier had a family with children, so he offered up his life instead. Those police, fire and first responders who have made the ultimate sacrifice are the Maximilian Kolbe’s in our careers.

“It’s often been said that our role, or the role of a priest, teacher or physician is not a career, but a calling,” Maas continued. “Not everyone is selected. Even those who desire it are not always called. And that alone should be enough to remind us to be loyal to that which we strived for, worked so hard for, and dreamed about becoming and did so.” 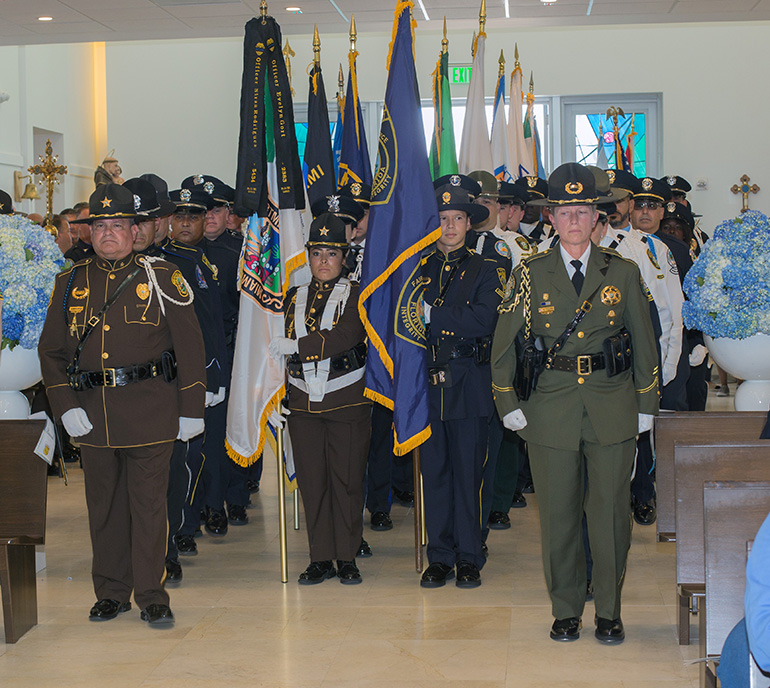 Police honor guards from various departments enter Our Lady of Guadalupe Church in Doral for the Blue Mass Sept. 27. Archbishop Thomas Wenski celebrated the Mass for the feast day of St. Michael the Archangel, patron saint of law enforcement officers.

Other News from Our Lady of Guadalupe Church

More articles about Our Lady of Guadalupe Church