When duty calls, you show up

Archbishop Thomas Wenski preached this homily at a Blue Mass — for those in law enforcement, firefighters and emergency personnel — that he celebrated Sept. 27, 2019, at Our Lady of Guadalupe Church in Doral.

What has come to be known as the Blue Mass has been traditionally celebrated in September, on or near the feast of St. Michael the Archangel, who in the Book of Revelation is described as the head of the angelic armies.

For centuries, Christians have sought his intercession: “St. Michael the Archangel, defend us in battle. Be our defense against the wickedness and snares of the devil.”

St. Michael is the patron of police officers. As first responders, police officers — along with firefighters and emergency personnel — are like guardian angels. We celebrate this Holy Mass for you, for all our police, for all of you who “carry a shield” to defend us “against the wickedness and snares of the devil.” Around the country, these Masses for law enforcement professionals are called “Blue Masses” to honor our men and women in “blue,” the more frequent color of the uniforms of our public servants. But regardless of the color of your uniform, we honor all of you and your comrades, for your service and your sacrifice. We thank you, for your commitment to the common good. 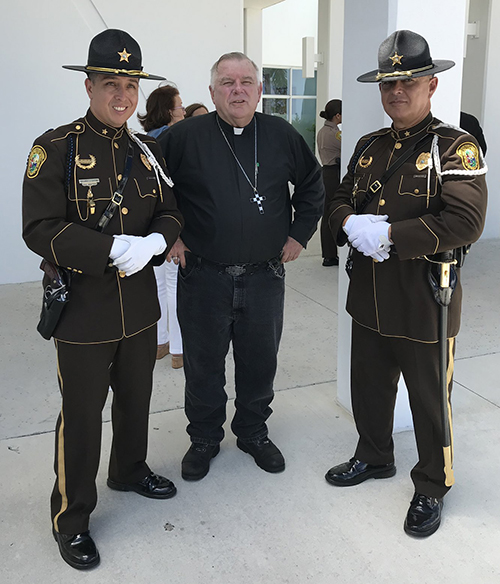 Archbishop Thomas Wenski poses with two Miami-Dade County police officers in dress uniform after the conclusion of the Blue Mass he celebrated for fire, police and emergency personnel at Our Lady of Guadalupe Church in Doral, Sept. 27, 2019. The photo was posted on the archbishop's Twitter feed @ThomasWenski.

Since the last year when we gathered for this Mass, more than 30 law enforcement professionals have died in the line of duty in our nation. We remember them and their loved ones in this Mass as well.

As public servants, daily you place yourselves in harm’s way in the performance of your duty, a duty whose burden we in civilian life often fail to sufficiently appreciate and acknowledge. Because of your work, you see too often the dark side of our fallen human nature. It is a thin blue line that protects us from barbarity; it is a thin blue line that defends our communities so that they remain just that, communities and not moral jungles.

Too often, we can become complacent and forget how fragile the world we live in is. That we can become complacent is perhaps a tribute to you and your effectiveness at public service. Most days you do your jobs so well we take you for granted: thanks to you, “the wickedness and snares of the devil” seem most times very far removed from us. But tragedies — whether they originate in evil minds or come about because of the fury of Mother Nature or they happen because of the limitations of our humanity in avoiding mistakes and accidents — these tragedies bring home to us the fragility of our lives – and the fragility of your lives.

The stress of your job can take its toll – on you, and on your families. You must be careful to take care of yourselves – so that you can continue to take care of others. And one way to do this – a very important way – is to remain grounded in your faith. Prayer and frequent recourse to the Sacraments – the Eucharist but also the Sacrament of Penance – can help keep it real.

The name, Michael, means: “Who is like God?” “Who is like God?” indeed. The response to human weakness, the response to human fear, and human sinfulness is simply dependence on the grace and strength of the Lord. At the celebration of every Mass, we acknowledge God’s greatness and we ask him for the strength to “let go and let God” less we become overwhelmed by the stress of our jobs and the challenges of our daily lives.

Today, we want to lift you up in prayer. We want to thank you and honor you – not because you are celebrities. Celebrities gain notoriety because they “show off.” The good work you do – to protect and serve – is not often mentioned in the papers or on the evening news. No, you’re not celebrities; but when duty calls, you “show up.”