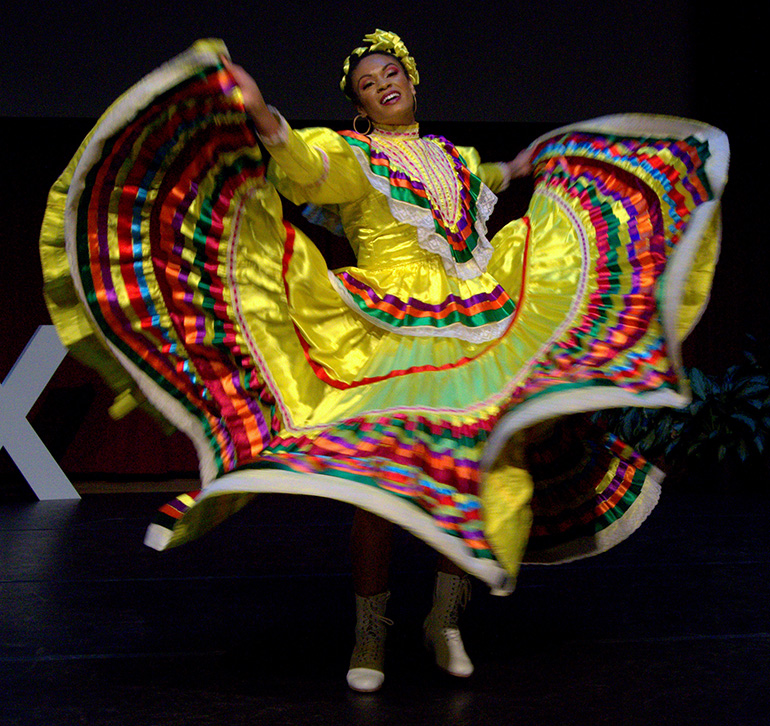 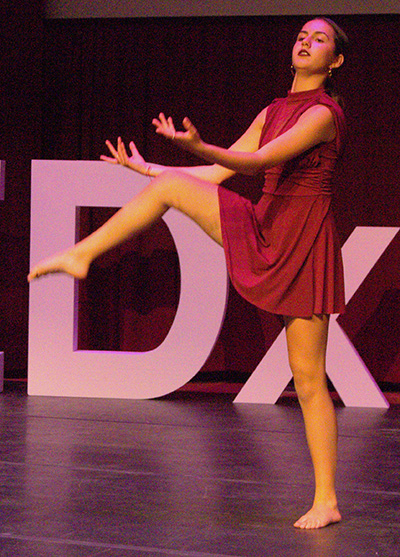 Valentina Olson does a dance solo during TEDx, a forum of speeches and performances at St. Thomas Aquinas High School in Fort Lauderdale.

Instead, they filled most of the program themselves — with singing, dancing, instruments and their own varied speeches.

Known as TEDx, a community-based version of the inspirational organization, the program allied 18 Aquinas students with six professional TED speakers.

Topics covered a sweeping landscape: theology, media, social change, preparing for success, information technology and others. But they all come together in a theme of personal growth, according to Natalia Romero, one of two co-directors for the event.

“Every topic was aimed at having people be good, then do good,” Romero said. “Every speaker talked about going from personal experience to doing good in the community.”

The program ran for seven hours at the school’s Bienes Center for the Arts. Various classes cycled in and out of the auditorium, with other students watching from around the campus via streaming video.

The 11 student speakers included Christian Chase, who gave a tongue-in-cheek talk on dreams and dinosaurs, and how one’s past can hold him back. “We can be like an asteroid,” he said. “We can make the past extinct by realizing our dreams.”

Gabriel Pacchiele discussed the results of his number-crunching on mass shootings — a deadly serious topic, coming a little more than a year after 17 people were killed at Marjory Stoneman Douglas High School in nearby Coral Springs.

“I wanted to show how to connect hard sciences and social sciences,” Pacchiele said.

Also appearing were seven student singers, dancers and instrumentalists — and an Aquinas French teacher, May Basse, who danced with Paco Huerta of Ballet Folklorico Azteca.

“It was a great experience, it helped me find my creative side,” Olson said. “I didn’t want to do it at first — I didn’t have confidence. But my teacher asked everyone, and I raised my hand.”

She said her performance, “Godspeed,” was about simple good will. “No matter what happens, or what people do to you, just wish them godspeed.”

Sophie Rier combined speech and music in her talk “Hate Hurts.” She told how bigotry affects both the victim and the hater. Then she began strumming an acoustic guitar, and ended with a song.

“It was something I’d wanted to do for a long time, something on my mind,” Rier said of her topic. “Maybe someone will do something about it.” 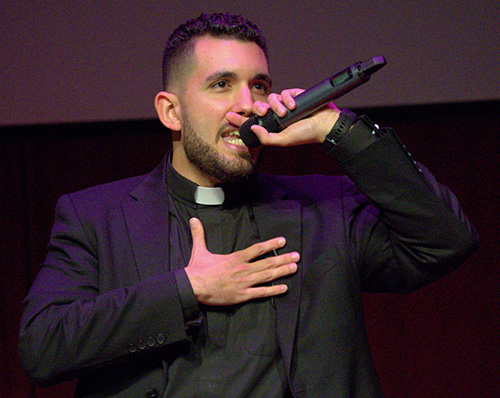 Michael Martinez, studying for the priesthood with the Society of Jesus, gives a rap during TEDx, a recent forum of speeches and performances at St. Thomas Aquinas High School in Fort Lauderdale.

TED professionals covered a similar wide range of subjects. Behavioral scientist Lindsay Sutton spoke on confidence as a learned skill rather than a mere feeling.

“It’s not about being good enough, it’s about being willing enough,” Sutton told the audience. “Especially when it comes to confidence. It’s a change in behavior.”

Michael Martinez, a Jesuit studying for the priesthood, revealed his rapping talent during his talk on “Hip-Hop, Media and Faith.” Just before performing his original rap “Xenophobe,” he asked his listeners to listen to the motives behind hip-hop.

“Hip-hop is sometimes dismissed as a damaging fire, instead of revealing something,” said Martinez, who teaches theology at Belen Jesuit Preparatory School in Miami. “Maybe it’s a purpose that has never been fulfilled. Maybe it’s a longing for a deep connection.”

The topics may have seemed all over the map, but they joined in three objectives, said Jane Curry, the other co-director for TEDx: “To highlight our students’ creativity, to bridge the gap between disciplines, and to demonstrate theology’s significance in that conversation.” 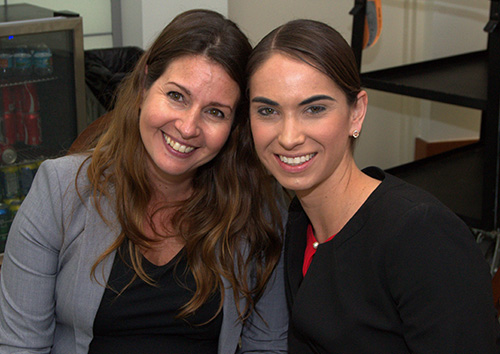 She said research suggests that students feel a “disconnect” between the two disciplines, science and theology. “We wanted to highlight the dialogue that’s going on between them.”

The co-directors themselves embodied that value. Curry teaches theology at the school, while Romero teaches physics.

The March 5 event was the second TEDx held at Aquinas. Two years ago, Curry and others at the school were seeking a platform for students to express themselves in speech and performance. They settled on TED because of the organization’s experience in forums. They also liked how the group curates the presentations and posts them online.

Curry and Romero held auditions and matched students’ themes with those of the official TED speakers. It took an arduous year and a half to meet the group’s exacting standards — a year of forming committees, refining speeches and rehearsing dances and songs. 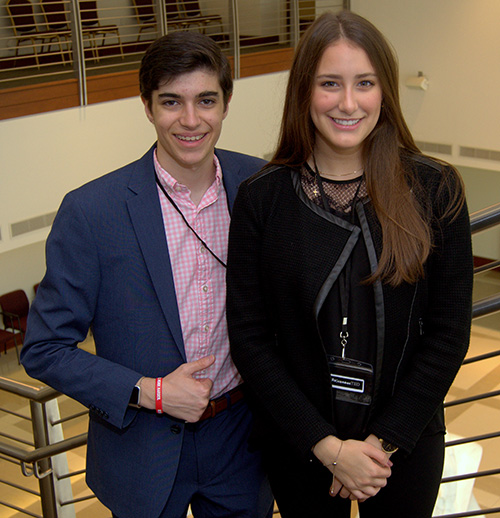 The project at Aquinas benefitted from alumni as well as newbies. Juniors Alessia Cocconcelli and Daniel De Urbina helped muster and organize dozens of volunteers. De Urbina, who is interested in economics, had filled the same role for TEDx at Aquinas in 2017.

He said the role helped him grow both as a leader and a worker. “When people trust you with that much responsibility, you push yourself,” he said. “It’s been a great experience.”

Cocconcelli brought her experience in giving two TED talks in her native Venezuela, which she left for the U.S. six months ago. “I love TED — it’s one of the few things that can reach teenagers,” she said.

“I’m exhausted, and my feet hurt,” Cocconcelli said with a smile. “But I’m proud of all the work we did. It was all worth it.”

The result impressed Lindsay Sutton, the behavioral scientist. “The professionalism amazed me,” she said. “The production values alone were top notch.”

All the speeches and performances at Aquinas will become the property of the TED organization, and the process of curating and post-production will likely take two months or more, Curry said. The good news is that when the content is available, anyone will be able to see it through a dedicated web page.

Students group behind the logo of TEDx, a forum of speeches and performances they helped to produce at St. Thomas Aquinas High School in Fort Lauderdale.