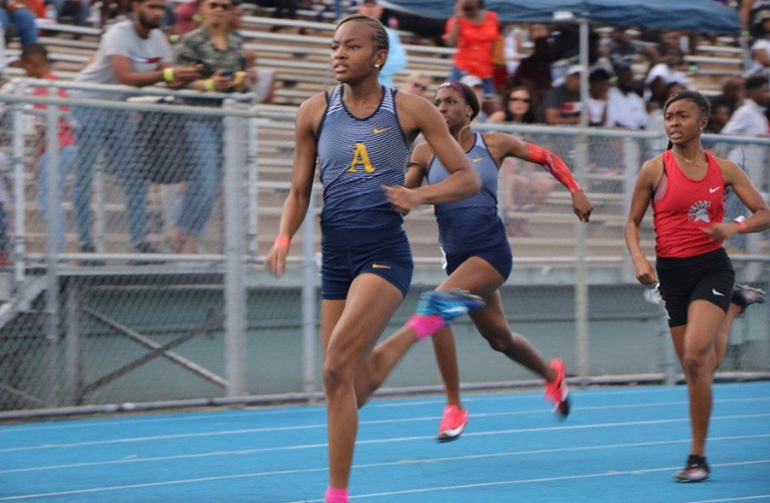 Emelia Chatfield was part of the St. Thomas Aquinas team that won the 4X400 relay at the Class 4A Florida Girls Track and Field Championships.

MIAMI | St. Thomas Aquinas’ repeat victory in the Class 4A Florida Girls Track and Field Championships may have looked easy. Coach Alex Armenteros said it wasn’t so. The Raiders used their depth to overcome injuries and still overwhelm the field.

The biggest miss came when defending high jump and 100 hurdles winner Zatoria Thompson injured a knee while posting state-qualifying finishes at regionals and could not compete. 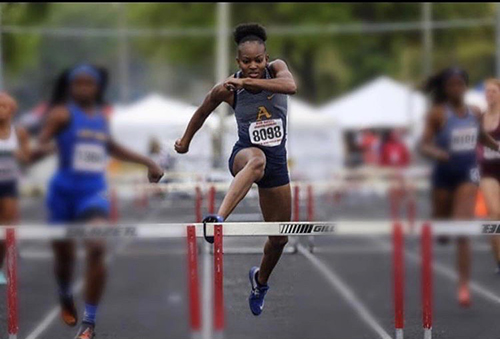 St. Thomas Aquinas' Emelia Chatfield set a state-meet record in the 300 hurdles in 41.34, just off the state-best 41.15 she ran in regionals.

Eddiyah Frye and Emelia Chatfield each won individual events, and the Raiders won both the 4x100 and 4x400 relays. Their depth showed in the fact that Aquinas also posted multiple points-winning finishers in four events.

“That was huge. We had depth all over the team,” Armenteros said. “That makes it very competitive in practice. These young ladies are used to competition. Some of the best times in the state are on our team. They feed off each other.”

Aquinas’ depth especially showed in the hurdles. Chatfield set a state-meet record in the 300 hurdles in 41.34, just off the state-best 41.15 she ran in regionals. Teammate Alexis Glasco finished third in 42.23.

Armenteros said the victory was a superb effort for Frye, a sophomore. “She went into the track meet sort of an underdog. She managed to put some great jumps together to help out the team.” 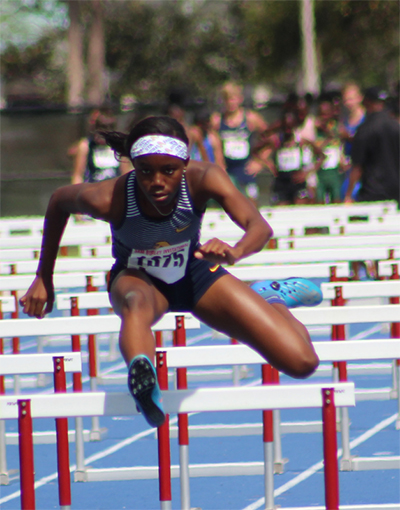 St. Thomas Aquinas' Eddiyah Frye won the girls long jump with a leap of 18 feet, 8 3/4 inches, and also took fifth in the 100 hurdles at the Class 4A Florida Girls Track and Field Championships.

St. Thomas Aquinas’ youth movement continued in the 4x100, where freshman Promise Fitzpatrick, sophomore Glasco, sophomore Zahra Kelsey and junior Jermecia Brown won in 46.28. The freshman, two sophomores and a junior succeeded so well that Armenteros refrained from his usual strategy of switching out runners in each round.

Chatfield teamed with Brown, Zahria Allers and Chenelle Williams to win the 4x400 relay in 3:43.72. Armenteros was happy that not only did that relay close out the victory; it also got the Raiders past a pesky Sunrise Piper team that had beaten the Raiders in prior meets.

He also said that Williams, who excels in the 400 and 200 but did not qualify for state due to a hamstring injury, also came up big on the final leg. “She was very excited about doing the 4x400,” Armenteros said. “It was a phenomenal job.”

Allers grabbed a second-place finish in the 100 meters and a third-place effort in the 200. Brown finished sixth in the 100. Hannah Lowenstein took third in the high jump, while teammate Anaiis Sheeres took seventh.

Armenteros lauded his seniors – McGreevy, Nicole Torres-Santos, Jordan Harriott, Jaziah Ochoa and Sheeres. “(McGreevy) did phenomenally all year,” he said. “She didn’t run the kind of meet she wanted at state, but she was very helpful not just running but as a good leader.”